This is a piece that originally ran on my own blog about the 1959 Edward Dmytryk Western Warlock. If you haven’t seen the movie, be warned: I include many plot details. 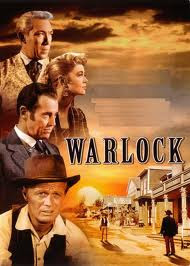 Imagine a movie with an intricate plot, driven not so much by events as by the tangled relationships between several well-drawn characters. It is a movie with obvious homoerotic undertones and some surprisingly intense violence. To further stretch your imagination, envision it as a film made in 1959 –and a Western, at that.

The film in question is Warlock. Based on a novel by Oakley Hall, it is one of the best examples of that post-war golden time –between the late 1940s and the mid-1960s –when Westerns became an arena of serious adult story-telling. The gunfights and brawls were still there, but a new element was added –the characters were real people, with weaknesses and emotions. The seeds planted by John Ford in Stagecoach grew and flourished.

The rough-and-ready cowboys of the San Pablo spread are terrorizing the frontier town of Warlock, Utah –chasing out the amateurish lawmen, boozing it up in the streets, even shooting a barber for having an unsteady hand. Only a few of the cowboys seem to have any redeeming qualities: the shy Johnny Bannon (Richard Widmark); his younger brother Billy, who idolizes the group’s vicious leader Abe McQuown (Tom Drake); and Curly –portrayed by scene-stealer DeForest Kelly (better known as Star Trek’s “Bones McCoy”) as a good-natured clown.

The city fathers decide they have had enough. Unwilling to face down the rowdies themselves, they decide to hire a famous gunman to serve as town marshal. Warlock’s moralizing, unofficial judge objects but is overruled (one is reminded of Judge Roy Bean’s words in Larry McMurtry’s Streets of Laredo: “Out here, if you want to be a judge bad enough you are one.)

Enter Clay Blaisedell (Henry Fonda.) The character is a blend of historical lawmen Wyatt Earp and Wild Bill Hickock –a former Union officer who tames one town after another, setting up gambling establishments on the side. His partner is Tom Morgan (Anthony Quinn), a gambler and gunfighter in his own right (read: Doc Holliday.) Instead of tuberculosis, Morgan has a crippled leg.

Blaisedell warns the council what to expect from him. Once he has cleaned out the threat the townspeople will begin to resent his authority and even to fear him –at which time he will move on, both parties having been satisfied. At this point we are introduced to the obligatory “good woman,” Miss Jessie (Dolores Michaels), who disapproves of the big, bad gunfighter yet is obviously destined to tumble for him. While her character is probably the weakest part of the movie, her presence is necessary to define Blaisedell, especially near the end. 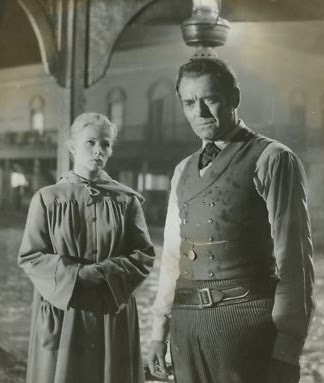 The bond between old friends Blaisedell and Morgan is the central relationship of Warlock. Morgan, the crippled gambler, lives his life vicariously through Blaisedell, pushing him toward ever greater glory –like a dapper male version of Lady MacBeth. Indeed, the two act like an old married couple. Morgan decorates their new quarters with drapes from San Francisco, and desperately looks for a word of approval from his partner. He ignores the advances of his own saloon-girls –his only interest is protecting Blaisedell, guarding the marshal’s back at all times.

Blaisedell runs the cowboys out of Warlock, warning them that if they cross him once more they will be banned from the town permanently. Bannon leaves the gang –he had kept one hothead from back-shooting the marshal –and remains in Warlock.

Morgan later receives word that “she” is coming into town on the next stage. “She” turns out to be Lilly (Dorothy Malone), Morgan’s old flame. Lilly is traveling with her late fiancé’s brother; Blaisedell had killed the fiancé in self-defense, never guessing that Morgan had secretly arranged the fight with such an outcome in mind. The man’s brother was now seeking revenge against Blaisedell, which would also bring Lilly her vengeance –she wants to hurt Morgan by destroying the one person he loves.

Morgan hides on a ridge to meet the stage, only to find that it is being robbed by two of the San Pablo boys. Young Billy is one of them. Morgan kills Lilly’s companion, shooting from the ridge, letting the cowboys get the blame.

The cowboys are arrested and sent to the county seat for trial –Blaisedell saves them from a lynch mob –and are acquitted due to lack of evidence. Blaisedell still “posts” them from the town of Warlock, on pain of death. Bannon has meanwhile accepted the job of deputy county sheriff. This thrills the old judge, who wants only “official” law.

The three posted outlaws return to town to protest the unfairness of their banishment –and to have it out with Blaisedell and Morgan. Blaisedell allows Bannon to talk to his old friends. The deputy implores both sides to back away, but to no avail –a gunfight erupts. Bannon’s role if reminiscent of county sheriff Johnny Behan’s role in the O.K. Corral shoot-out; caught between gunmen-turned-lawmen and a group of violent but popular cowboys, he can only watch the inevitable outcome. This further blending of fact and fiction helps establish Warlock as the mythic Western everytown. 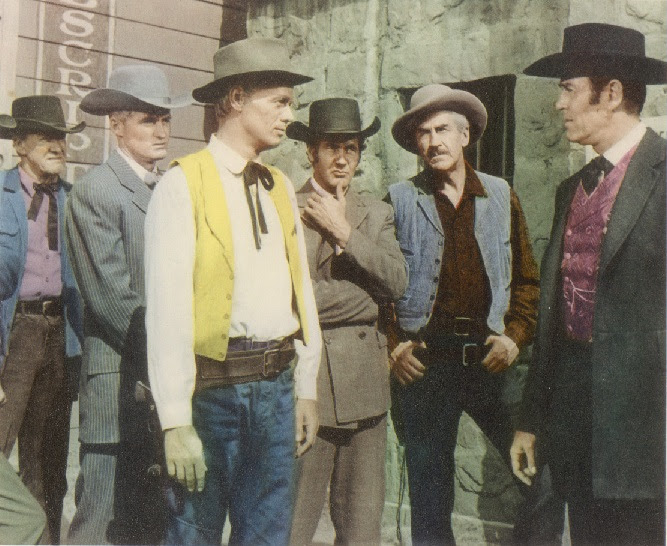 The three cowboys –including Bannon’s nineteen-year-old brother –are killed. A fourth dies as well; he had attacked the lawmen from concealment, sent by McQuown. The gun battle does not end the conflict; just like in Warlock’s historical counterpart Tombstone, the surviving cowboys declare war on the city lawmen. Bannon warns Blaisedell not to get involved any further. As a duly-sworn deputy, it is Bannon’s responsibility to keep the peace, not the gunfighters’.

Bannon visits the San Pablo ranch to warn the McQuown that he must not come to Warlock the next day as he had publicly announced he would. McQuown stabs Bannon’s hand, pinning it to the table and threatening to rip it off unless the deputy swears that the cowboys’ version of the conflict is the true one. Only Curly’s intervention allows Bannon to escape alive. 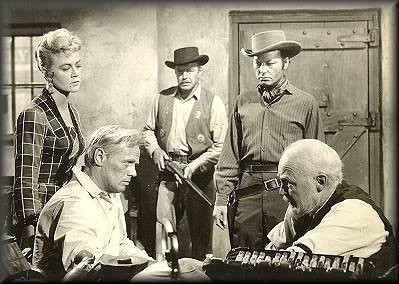 Blaisedell proclaims his intention to retire from the peace-keeping business –he is going to marry Jessie and settle down. He offers his help to Bannon –the outlaws are still on their way –but the injured deputy refuses politely. 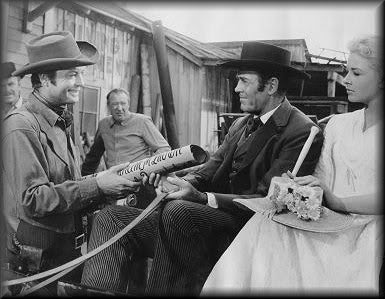 Tom Morgan is outraged by the recent events. His greatest anger is directed toward his rival for Blaisedell’s attention –he makes several callous remarks to Jessie, pointing out that Blaisedell could be killed at any time. Morgan is also very upset at Lilly –she has told Blaisedell about Morgan’s role in the death of her fiancé and his brother.

Morgan entreats his old friend not to intervene in the coming battle. He wants Blaisedell safe, and also wants to ensure that Bannon is killed. Then the townspeople would turn once more to Blaisedell to save them. “You can’t let him be the hero,” Morgan says. “If you ain’t the marshal, you’re nothin’!” He holds Blaisedell in their shared hotel rooms by gunpoint until the fight is over. Morgan informs Blaisedell that he is responsible for the gunfighter’s success –always watching his back, arranging his jobs, letting him have all the glory even though Morgan is the better gun. Everything he did was for Blaisedell; as Morgan had told Lilly earlier, “He’s the only person, man or woman, who ever looked at me and didn’t see a cripple.” 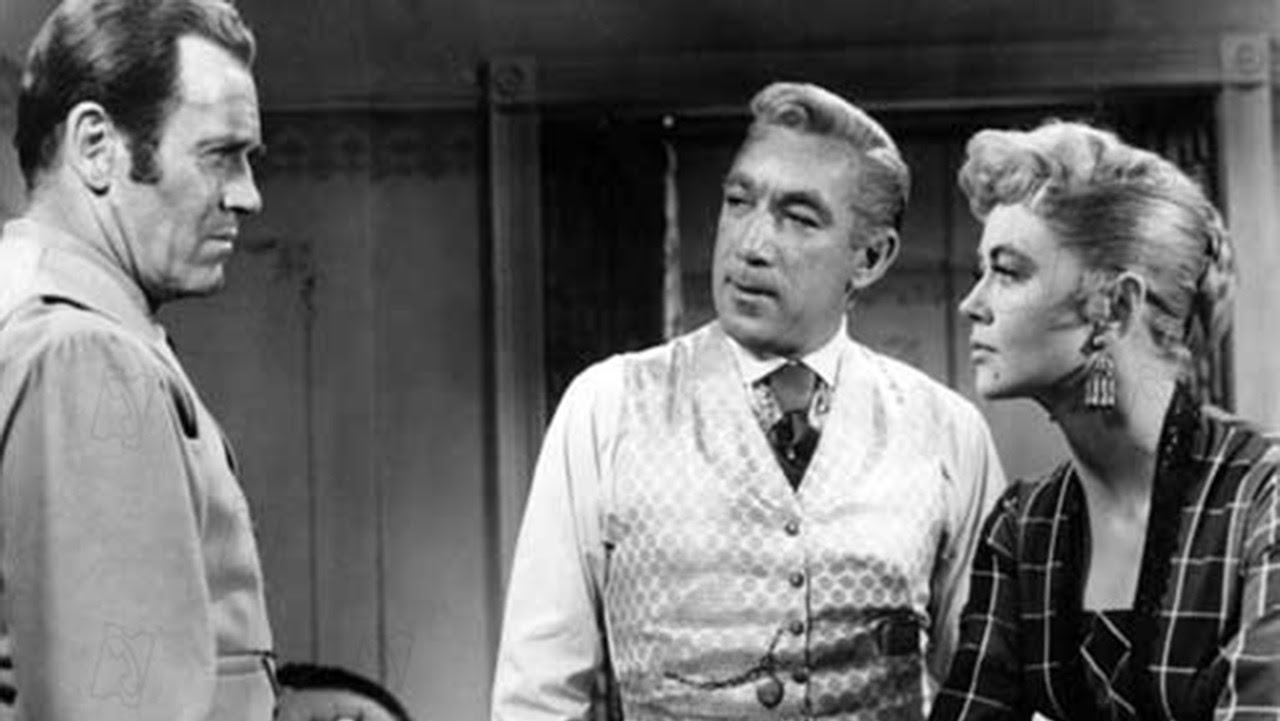 The two gamblers/gunfighters watch the fight through the hotel room window, and are surprised. Bannon wins. The deputy kills McQuown and his most vicious sidekick; the others are subdued with the help of Curly and several local citizens who have been inspired by the quiet young deputy to finally take their own stand.

By nightfall Morgan is drunk. The gambler shoots up the town, daring the “big, brave deputy” to come out. Blaisedell locks Bannon up in his own jail –he knows the deputy would stand no chance against Morgan.
Blaisedell faces his friend and warns him to settle down or Blaisedell will be forced to hurt him. 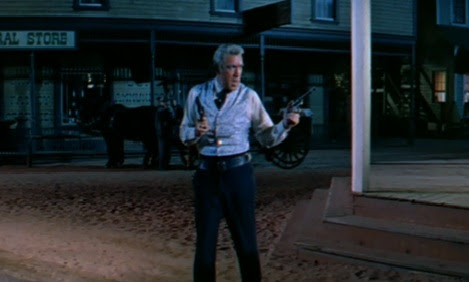 “Then I win,” Morgan says happily. “You’ll be the hero again!” Morgan smiles at the prospect of everything returning to its former status. He draws on his partner, firing first but intentionally missing –lending credence to his claim of being better than Blaisedell –and Blaisedell shoots him.

Anguished, Blaisedell picks up his friend’s body and carries it back to their saloon. A storm has begun –he lays Morgan on the faro table and stands vigil over it to the crackling sound of the lightning. The self-righteous judge is there; Blaisedell kicks the old man’s crutch from under him. “Crawl past him,” he says, pointing to Morgan. “He was a man.” Blaisedell burns the saloon down around Morgan’s corpse.

Bannon informs Blaisedell that he will have to arrest him on the next morning, thus giving him a chance to leave town before then. Blaisedell tells Jessie that he could not remain in Warlock, anyhow –he would have to become a storekeeper or a farmer if he did. Jessie does not understand; those were his plans only the day before, after all.

But something very important had happened since then. Morgan had indeed won. By his death, the gambler had ended Blaisedell’s idyllic plans and returned him to the life of the celebrated gunman –a life which Morgan’s lame leg and crippled self-esteem had caused him to deny himself. Clay Blaisedell rides away from Warlock, looking for a new town to tame. The viewer is left to wonder whether he can survive without his alter ego. 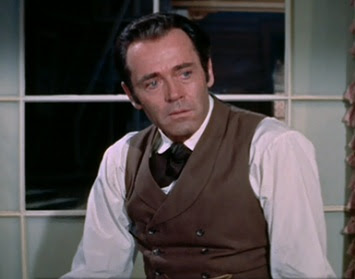 Tom Morgan was one of Anthony Quinn’s best roles, and one of the most complex characters to ever stride down a dusty Western street. He is sophisticated yet tough, and insanely jealous where his friend is concerned. The film’s title, Warlock, obviously comes from the town’s name; it could also apply to Clay Blaisedell, who performs dark magic with his guns, or to the story’s catalyst, Morgan, a male “witch.”

It is a mystery to me that Warlock is not more widely-known, or more fondly remembered. At certain points –especially the scene where Henry Fonda, his face lit by lightning, regards the body of the beloved partner he slew –the film achieves the quality of a classic tragedy. Perhaps the casual Western viewer likes his heroes to wear white hats, or his anti-heroes to wear black ones, and is left uncomfortable by these ambiguous figures whose very relationship is unclear –especially when that relationship is very homoerotic, as this one unquestionably is. Maybe the marshal should just stick to his job of killing the bad guys, and not let things get cluttered up by feelings and desires and the like.

I for one do not believe that to be the case. If it is, it should not be –the Western has the potential to be one of the most interesting story-telling avenues a writer can use. The viewer who likes the Western for its action and intensity –and also the viewer who believes that the Western goes no deeper than those qualities –would both be pleasantly surprised by a visit back to the “psychological Westerns” of the 1950s. In the town of Warlock, all the hats are gray.

NOTE: The novel, which is far more detailed, is extremely good as well.