A little more about Duke, our handgun expert in Japan 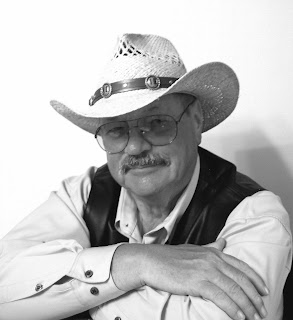 WWA members know Duke Hiroi, and are a bit familiar with his background. He's a member of Western Writers of America, though he's never published a word in English. Duke and I attended the WWA convention in Las Vegas in June 2013. And, while some of us were engrossed in workshops and coffee conversations, Duke took some time off and went off to a desert rifle range and went through some old-time weapons for an article in a Japanese magazine called COMBAT.

Duke's article--Old Gun Shot!--told about the black powder guns he shot and analyzed out in the desert south of Las Vegas.

He states with pride that "I took a trip to the Western Writers of America conference. I went last year as well, and as an expert on weapons of the period, I was accepted as a full member, the only Japanese member in the entire organization." 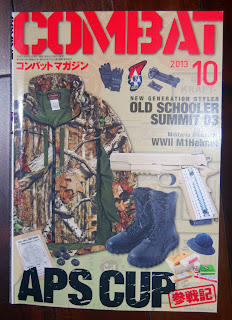 This time, however, he's concentrating on a Spenser carbine, a Model 1848 Dragoon, and an SAA Third-Generation Colt. Duke says, "To a historical gun freak like me, it looked like Treasure Island." 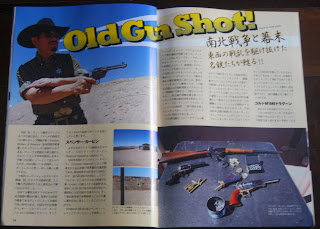 Here we see the opening spread of Duke's three-spread article. The subhead under the English headline says, "These are some of the guns that helped win the West; they were used in the Civil War first, western expansion after."

First, he says, we have the Spencer Repeating Carbine, developed by Christian Spencer. It was the world's first repeating rifle. Its M1860 was used in the Civil War from 1861 to 1866 (sic) in .56-56 caliber. According to existing records, the Union bought a total of 94,196 rifles and carbines in M1860. When M1865 came out, it was .56-50 and more than 200,000 were produced. Furthermore, these repeating rifles came into Japan at the end of the feudal period.

Spencer .56-56 M1860s used a Spencer rimfire cartridge, and fired seven cartridges with its repeating lever action before needing to be reloaded. Spencers are loaded through the butt with a tube magazine that accepts a follower spring to push the loads forward. Lever action incorporating the trigger guard made the carbines easy to load and fire.

Duke goes into more detail that I will leave to your imagination, but one thing he does mention is that Arnold Schwarzenegger uses and M1887 Spencer repeating shotgun in the movie Terminator II. 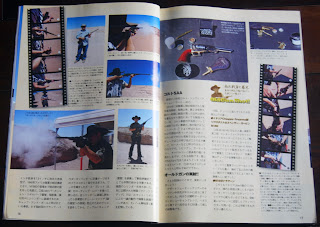 The lefthand page shows Duke loading the Spencer, shooting it, and posing for the camera. Somehow he managed to catch yours truly with his camera, IDs me as Chuck Tyrell, that well-known Western novelist (and former USMC). Duke put at least 50 rounds of black powder ammunition through the Spencer. Don't duel with Duke. He's a very good shot. 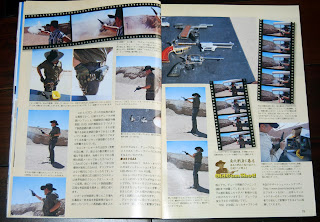 Duke moves on to the M1848 Colt Dragoon. He says the Dragoon takes care of some of the problems in the Walker Colt M1847. The Walker Colt's loading lever, for example, had to be removed for use. The Dragoon's is attached beneath the barrel and need not be removed to load the pistol. The Dragoon served the US Army from 1848 until the Colt Army M1860 was adopted. It was a cap-and-ball pistol that required the powder and bullet to be loaded from the front of the cylinder and a fulminate cap placed on nipples at the rear of the cylinder before firing. Although the loading process was took time, the ability to fire six shots without reloading was a strategic advantage. Because loading was slow, men often carried several pistols.

The Colt SAA available that day was a Colt Original 3rd Generation 4.75-inch .45 caliber weapon firing .45 long Colt ammunition. Says Duke, "I've fired many Colt SAA weapons in my career, but guns made by Colt seem to have dependable quality and fire straight and true. I continue to be impressed by their quality.

We spent a good day in the sand dunes south of Las Vegas, and WWA, Western novels, and Western weapons received an excellent explanation and portrayal from Duke Hiroi.
Posted by ChuckTyrell at 7:25 AM