Christmas During the Civil War

From our outfit to yours, Merry Christmas to each and every one of you!

Did you know that the modern Christmas we celebrate today began in this country just prior to the Civil War?  Have you ever wondered why Santa Claus is from the North Pole? The answer comes from the division of the North and South during the Late Unpleasantness.

Christmas cards weren't as prevalent then but a few were sent out and caroling was done in public places.  Trees were cut down, taken into homes and decorated. Soldiers even set up trees in their camps, often decorating them with hardtack.  But soldiers couldn't relax around camp celebrating the holiday. They had to hunt for firewood and attend to the other duties of camp life. 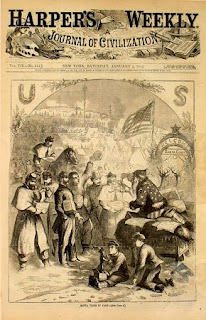 Santa Claus appeared publicly for the first time in a department store in Philadelphia in 1849. The modern image of Santa Claus came to life during the War and was popularized by Harper's Weekly illustrator Thomas Nast, a staunch Union supporter, who allied Santa with the Union Army and depicted him in several cartoons interacting with Union troops. Abraham Lincoln later said that the Santa who appeared in Harper's Weekly was "the best recruiting sergeant the North ever had."  And it was Nast, after the War who made Santa's home the 'North' Pole.

Yet the War had a major impact on how the holiday was celebrated. The country was torn apart for four long years, loved ones went off to fight and many were never heard from again.

One soldier wrote, "You have no idea how lonesome I feel this day. It's the first time in my life I'm away from loved ones at home."

The Christmas of 1861 was described by Sallie Brock Putnam of Richmond, VA.

"Never before had so sad a Christmas dawned upon us. Our religious services were not remitted and the Christmas dinner was plenteous of old; but in nothing did it remind us of days gone by. We had neither the heart nor inclination to make the week merry with joyousness when such a sad calamity hovered over us."

The War did not stop for Christmas and many skirmishes were fought on that day. On December 25, 1862, Confederate general John Hunt Morgan launched his Christmas Raid in Kentucky.

The Union blockade in the later years of the War had a dramatic affect on how the holiday was celebrated in the South. Due to the hardships of the war and restrictions caused, many children were told that Santa wouldn't be able to get through the blockade and gifts weren't as prevalent in the South as they were in the North, but children were given anything their parents could spare.

Perhaps the biggest Christmas present of the War was given to Abraham Lincoln when William Tecumseh Sherman pillaged Georgia and presented Lincoln with the city of Savannah via telegram.  "I beg to present you as a Christmas gift, the city of Savannah, with 100 and 50 guns and plenty of ammunition, also about 25,000 bales of cotton."

Although the Christmas tradition has stayed pretty much the same, it is hard to imagine how difficult it must have been to celebrate the holiday during such turbulent times.

He is the Editor-in-Chief of The Western Online, a magazine dedicated to everything Western. He can be contacted through Twitter @mattpizzolato or via his website:
www.matthew-pizzolato.com.