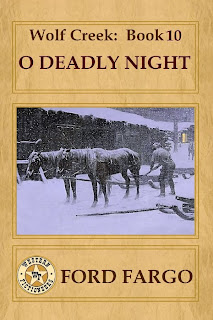 Like the first collection of holiday-themed short stories (A Wolf Creek Christmas), O Deadly Night visits some of the Kansas cattle town’s familiar denizens and introduces a few newcomers.

At the rate newcomers were spilling from the woodwork in the previous Christmas anthology, it seemed Wolf Creek might explode before 1871 ended. Thankfully, the pace of immigration seems to have slowed by O Deadly Night. Only two new characters are introduced: farmer Hutch Higgins (written by Big Jim Williams) and Irish drifter Kelly O’Brian (Charlie Steel). O’Brian, formerly a track-layer for the railroad, may become a rancher in partnership with his long-lost brother and an easterner…if the three of them survive a white-slavery ring operating way too close to Wolf Creek for comfort. Steel’s “Irish Christmas at Wolf Creek” introduces the sort of never-say-die character Wolf Creek needs with the body count rising as it has been lately.

In Williams’ “Sarah’s Christmas Miracle,” Wolf Creek gets another man trying to live down a shameful past in anonymity. By the time Higgins gets his Christmas wish—a miracle cure for his dying daughter—readers will be privy to the farmer’s darkest secrets, but the citizens of Kansas have no idea the kind of trouble Higgins’ mere presence could attract.

While Cheryl Pierson’s contribution, “A Home for Christmas,” doesn’t exactly introduce new characters, the stars of the story have played only minor roles previously. When Kathleen Hyder decides to leave her abusive, minister husband, she little suspects a chance encounter with a childhood friend, Cherokee Lighthorse officer Carson Ridge, will lead to an affair of the heart. Readers who have followed the series from the beginning probably will delight in seeing judgmental, mean-spirited Rev. Dill Hyder get his comeuppance, and Kathleen and Carson fairly sizzle together.

Chuck Tyrell’s “The Angel Tree” is the most touching of the six stories. Soiled dove Brandy, who previously appeared only long enough to deal with series regular Billy Below’s embarrassing gunshot wound, befriends a group of starving urchins. Outcast because their mothers work as whores in the low-rent cribs, the kids are convinced an angel will deliver them from infamy on Christmas. Tyrell wrings sniffles and smiles from readers with this heartwarming tale.

“The Spirit of Hogmanay,” by Clay More, drops readers into the middle of Dr. Logan Munro’s busy holiday and a minor mystery involving some expensive scotch. As usual, More entertains and educates, providing fascinating—often surprising—medical details laced with Scottish wit and no little charm. Hogmanay, the Scottish New Year’s observance, is a melancholy period, but More spices Munro’s experience with hope for the future.

Smith’s “O Deadly Night,” which lends its title to the entire volume, is the darkest of the tales. As 1871 draws to a close, Marshal Sam Gardner is called upon to put a literal end to a local troublemaker. The deed must be done, and Gardner faces that knowledge with typical stoicism. Afterward, reaction from the townsfolk has him doubting himself and mankind in general. Usually a wiseacre to the core, the marshal reflects on the year in an uncharacteristically morose exchange over a drink with Munro.

O Deadly Night is an entertaining end-of-the-year read—but more than that, it displays the depth and breadth of life in Wolf Creek in a new way. Taken together, the two Wolf Creek Christmas anthologies hint that 1872 may be one heckuva year in Kansas. 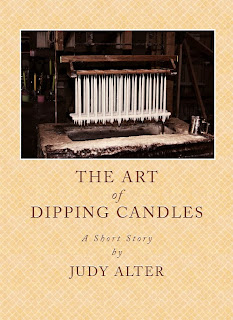 A Comanche raid on a North Texas farm leaves lasting scars on a mother and her preteen daughter in Judy Alter’s ultra-short, powerful “The Art of Dipping Candles.” Told from the young girl’s point of view, the story resonates with fear, a mother’s all-consuming love for her children, and a daughter’s aching loss.

Alter has said she based the story on a real incident that took place in the 1880s, but the emotional punch is universal and timeless.

Read this one. It will haunt you.


Kathleen Rice Adams is a Texan, a voracious reader, a professional journalist, and an author. She received a review copy of Wolf Creek: O Deadly Night from the publisher. Her opinions are her own and are neither endorsed nor necessarily supported by Western Fictioneers or individual members of the organization. Links in the review are for convenience only; they do not produce affiliate revenue.
Posted by Unknown at 1:00 AM