I wasn’t sure whether this article was supposed to be about a favorite television series or a movie, so I combined them. One of the best westerns I’ve seen in either format is Alan Geoffrion’s Broken Trail, starring Robert Duvall and Thomas Haden Church.


This television mini-series (two parts) encompasses just about everything the Old West was about: code of honor, swift justice, romance, and lots of action. It’s set mostly in Idaho, and while the terrain had to be changed to fit the story, that’s all right with me. 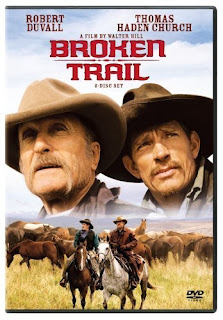 The story begins when an old cowhand, Prentice (Prent) Ritter played by Duvall, delivers the news of his sister’s death to her only son, Tom Harte played by Thomas Haden Church, who has been estranged from the family. Worse, she bequeathed the farm to Prent, not her son. Prent doesn’t agree with her decision, so he offers to cut Tom in on a scheme to drive 500 horses from Oregon to Sheridan, Wyoming. Tom agrees, but is uneasy about both the plan and his uncle.


Once they gather the horses and travel a good way into Idaho, they come upon a wagon driven by the unsavory Captain Billy Fender (James Russo), a slaver who’s transporting five young Chinese ladies to an Idaho brothel. This addresses one of the most sordid episodes in Old West history, Chinese slavery, which didn’t end until the late 1920s. Broken Trail doesn’t gloss over the horror. 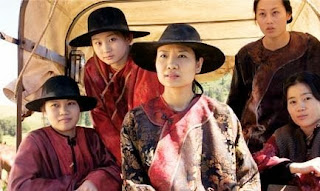 These teenage girls are respectable and scared.  The complicated and physically demanding roles were well-played by Jadyn Wong, Caroline Chan, Gwendoline Yeo, Olivia Cheng, and Valerie Tian. The character arcs from fear and suspicion of their protectors to trust and even love flows well into the other storylines.


Fender, giving into his own proclivities, slips drugs into the cowhands’ whiskey, steals their horses, and makes off with one of the girls. Tom goes after him and finds the girl, who Fender battered and raped, then with renewed vengeance, Tom finds Fender and hangs him.  Justice is swift and harsh on the frontier.


Now Prent and Tom are responsible for 500 horses and five hysterical Chinese girls, only one of whom speaks any English. But Prent, in classic Duvall style, establishes a rapport with the girls. They have to cross rugged country, teach the girls how to help out, deal with their emotional issues, sometimes not effectively, all while encountering bad guys along the way.


One of their most ruthless adversaries is an Idaho brothel madam, Big Rump Kate played marvelously by Rusty Schwimmer, who’s expecting delivery of the slave girls. When she finds out Prent and Tom have them, she hires Big Ears Bywaters to take care of the situation. Big Ears is the ultimate in villains, and Chris Mulkey nailed this role—and also nearly nailed Prent’s jewels... Well, you need to see the movie. It’s a good one. Broken Trails is a movie you can see multiple times and find something new with each viewing.