The Question of Santa

Doing a little departure from my usual post for the sake of the season's spirit. Hope you enjoy this small Christmas tarry.

Last month I introduced you to White Oxley, a minor character from two of my novels, and possibly one of my alter egos. He's back here again this month.

White is an old codger who has taken on life as best he can. Sometimes it's joyful, sometimes it's painful, most times it's a puzzle. But, like a lot of American heartlanders, he has the strength of character to get through whatever comes his way. His priorities have always been God, family, country.

Now in his elder years, White considers it his mission to pass on the values he has gained to the generations after him. Here's one such episode: 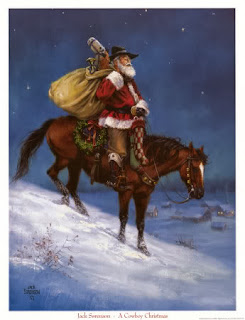 The boy's gramp, White Oxley, drove on quietly for a few seconds, trying to decide what tack to take with this question. It was one of those a child asks whose answer would become a defining moment in that young life. Most parents preferred to put off answering such questions. White could think of three: Is Santa real? Is the Tooth Fairy real? and What is sex? White had to be careful how he answered.

They were headed over to Tulsa. Jakey had spent the night with them out at the farm, as was his habit on Fridays. The boy's grandmother needed to do some Christmas shopping, so they'd all piled into the pickup to make a day of it.

"Why you asking a question like that?" It was a stall tactic. White looked over at his wife in a silent plea for help. She smiled and winked, but said nothing. She always did this to him, taking delight in letting him dig a big hole before she came to pull him out.

"Sammy Botts told us Santa's all fake," Jakey answered. "That grown-ups made him up. That parents are the ones who put presents under the tree on Christmas Eve."

Jakey was in the first grade, the toughest of all school years: the start of reading and writing, math, homework, and no front teeth. Also, some know-it-all older kid usually came around to break the news about Santa and such to the last of the innocents.

"Edie Jean started crying when Sammy said that," the boy continued. "And started pounding on him, until Miss Birney stopped her."

"She said she asked Santa to give her daddy a ride home on Christmas Eve. He's in the Army fighting bad guys somewhere far off," Jakey spoke it as a matter-of-fact.

"Well…" White said. He sighed and looked to his wife again, but she'd turned her face toward the 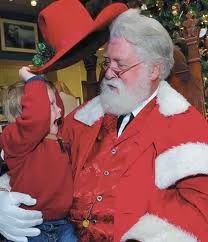 window, studying the passing countryside. White figured she was thinking about her brother Ben and that sad and empty Christmas back in '68.

"Is he, Gramp?" the boy implored again.

"What do you think, son?" White asked.

"Well, there you go," his gramp said. "As long as that's what you believe, then he is. Believin' is a powerful thing."

White glanced over at the boy. Jakey looked thoughtful, so White continued.

"Sammy Botts just ain't got all his facts. Parents do put some of them presents out on Christmas Eve, but that's only because Santa asks folks to help out. You see, there's a whole lot more kids nowadays compared to when I was a kid. It's just more easier for Santa to get it all did that way before Christmas morning.

"So you tell Sammy he's got it wrong. That if he was to believe Santa's out there, like you, then by damn, he'd be out there; if he don't, he won't.

"White!" his wife said with that admonishing tone she used when he swore.

White went on. "Seems to me, though, life'd be a whole lot more fun if you was to believe in Santa Claus."

"One more thing," White said. "Monday morning I want you to go up to Edie Jean, and tell her this. Tell her it come from your gramp who happens to know Santa personally. 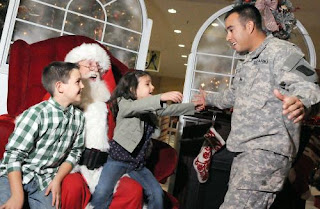 "You tell her that Santa will try his da…his goldurned best to pick up her daddy and bring him home, but that it ain't entirely up to Santa. You see, a soldier ain't likely to leave his buddies behind if they need his help. Could be her daddy won't be able to make that rendezvous with Santa. But if he don't, it won't be because he don't love his baby girl. No sir, jist the opposite. He loves her so dang much he's willing to stay over there to take care of those bad guys so's to keep her safe back home; to make sure she has a happy and peaceful Christmas.

"You tell Edie Jean, she needs to believe, too, and that the day is comin' when her daddy will be home."

White wheeled the pickup into the mall parking lot. "You think Santa is still here?" Jakey asked. "'Cause I want to go see him again."

"Why, I believe he is," his gramp answered.

White looked at his wife and winked. She touched a tissue to her eye and blew him a kiss. 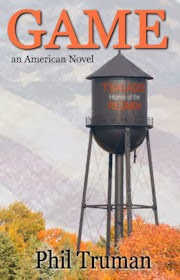 You can read more about White Oxley in Phil's novel GAME, an American Novel, an Amazon #1 best-seller in sports fiction. White also plays a part in Phil's other best-selling novel  Legends of Tsalagee, a rollicking tale of mystery and adventure in a small town. Truman's third novel, Red Lands Outlaw, the Ballad of Henry Starr, is an award-winning historical western about the life and times of an Oklahoma outlaw.  His western short story “Last Will for an Outlaw” appears in LaFrontera Publishing’s anthology, Dead or Alive, released June 2013.