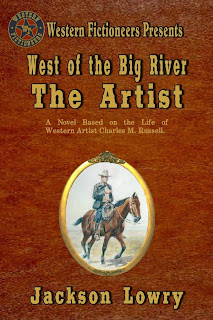 Before he was a celebrated artist, Charles M. “Charlie” Russell worked as a cowhand. In West of the Big River: The Artist, author Jackson Lowry brings the pre-fame Russell to life as a footloose laggard who grows into his heart and soul during a brutal Montana winter.

Lowry does an exceptional job of imbuing the fictionalized first-person account of a few brief-but-intense weeks with self-effacing humor and depth. Readers will feel Charlie’s fatigue, the bitter cold, and the even more bone-chilling fear. Charlie Russell is no hero; in fact, he just barely qualifies as a cowboy. Relegated to night herd because of his poor skills with horses, guns, and lassos, Charlie’s artistic ability puts him — unwillingly — at the center of a rustling caper. Although he’d much rather fade into the background and draw or paint, suddenly he finds himself deputized and chasing some very bad, gun-wielding outlaws. The result is an uncommon mixture of comedy and drama that lends a spritely pace to the story.

Lowry’s prose overflows with charm and wit, creating characters and situations that virtually leap from the pages. Under the author’s pen, the west comes to life as vividly as it did under Russell’s brushes and chisel. The Artist is a recommended read, not only for entertainment value, but also for the inescapable notion that this glimpse may provide a very close approximation of the real man behind the artist’s legend. 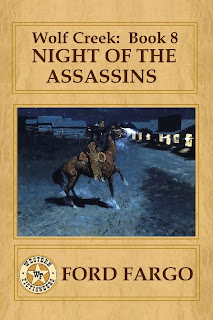 On its best days, Wolf Creek, Kansas, isn’t a peaceful sort of place, but when a local drug lord and brothel owner decides the town ain’t big enough for him and any competitors, things go completely to hell without even the benefit of a handbasket. Disembodied heads in bloody burlap sacks start showing up on doorsteps … and that’s the least of the town’s worries.

Wolf Creek Book 8: Night of the Assassins may be the most blood-drenched volume in the Wolf Creek series yet. Except for a brief foray into Old West forensics courtesy of town doc Logan Munro (written by Clay More), violent deaths stack up like tumbleweeds against a fence. Munro’s chapter, which provides an up-close look at an 1871 autopsy, offers the only opportunity readers will have to catch their breath. When a detailed, clinical examination of decapitation victims is the “light” reading in a novel ... well, draw your own conclusions.

Racial tension grows bowstring-tight as the mysterious, largely invisible assassins strike at will and then disappear. Even Wolf Creek residents who are reasonably well behaved (by local standards) begin forming mobs with the intention of ridding the prairie of all Celestials. A full-scale riot seems inevitable about the time mild-mannered schoolteacher Cora Sloan (Bill Crider) forms a one-woman vigilance committee and commences to shooting folks in order to protect a law-abiding Chinese family. Poor Marshal Sam Gardner (Troy Smith) and his deputies are at their wits’ end trying to keep a lid on the town by backing down one side and then the other — repeatedly. Thank goodness Samuel Jones’s (Chuck Tyrell) San Francisco connections prove to be a literal lifesaver, albeit a violent, bloody one.

Wolf Creek Book 8: Night of the Assassins is Old West action on steroids. Still, the book manages to add education and a walloping dose of surprise to the non-stop entertainment. Fans of the series definitely won’t be disappointed, but they may find themselves asking “how will Ford Fargo top this?” 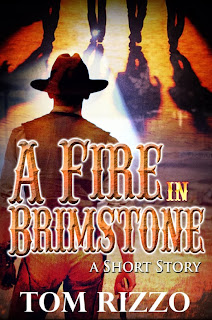 Can a man buy redemption with the wages of sin? Sheriff Cass Ryan sure hopes so, because his only other option is to consign the entire town of Brimstone to Hell.

As plots go, the reformed outlaw facing down specters from his past is as old as the western genre itself. In A Fire in Brimstone, author Tom Rizzo does nothing new with the basics, but the way he constructs an intricate plot in only thirty-two pages will keep readers inside the story from start to finish. With his second work of fiction, Rizzo establishes himself as the sort of “plotty” writer who could woo mystery and thriller fans to westerns.

The ending may seem a bit too easy and lacking in consequences, but it’s satisfying and fits the story. The real fun in reading A Fire in Brimstone is in watching the jigsaw puzzle come together.

Kathleen Rice Adams is a Texan, a voracious reader, a professional journalist, and an author. She received review copies of Wolf Creek Book 8: Night of the Assassins and West of the Big River: The Artist from the publisher. Her opinions are her own and are neither endorsed nor necessarily supported by Western Fictioneers or individual members of the organization. Links in the review are for convenience only; they do not produce affiliate revenue.

Email ThisBlogThis!Share to TwitterShare to FacebookShare to Pinterest
Labels: A Fire in Brimstone, Charles M. "Charlie" Russell, Kathleen Rice Adams, Night of the Assassins, West of the Big River: The Artist, Wolf Creek