“Get thee behind me, Satan,” was a common, not to mention, frequent, admonition of my childhood. Cheryl’s request that I participate in her “Friday Five” blog session posed a real issue of how intensely personal to get in answer to what are simply seven fun questions. I suspect all Westerners don’t feel comfortable standing out all that much, even if they do choose to be writers. Yet all Westerners worth their salt live up to their promises. And I promised. So, “Get thee behind me, Satan,” here goes. 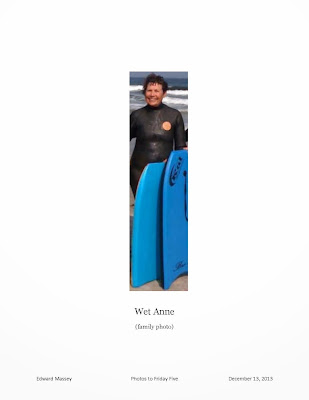 1. Most exciting day of your life was??? I hope, someday, you all meet my wife, Anne. The day I met her, I was at an Elizabeth Kubler Ross workshop on “Life, Death, and Transition.” The heavy title and the subject matter did not deter someone from saying something very funny. I laughed, perhaps a little exuberantly. Anne turned around and smiled. We married sixteen years later. (Since this is being published on December 13th, in five days, that will be ten glorious years ago!) (You may notice, those are not mountains or prairies behind her. She’s a Mainer.) 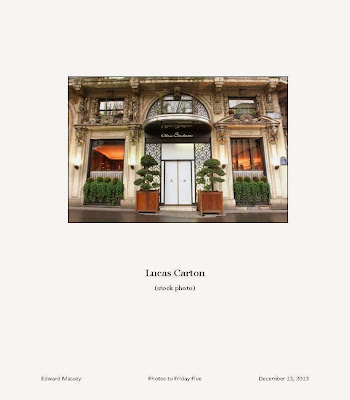 2. My favorite food is??? This is not an advertisement and I am not a proselytizer, but I am vegan. Once, my ambition was to eat in all of the Michelin Guide’s Three Star Restaurants in France – and I did. I asked Anne, whom you met in the answer above, to marry me at Lucas Carton, in the Place Madelaine, in Paris. I told you what I am coming up to in five days, so you know it worked. A little over two years ago, I concluded I had to bite the bullet (a minor Western analogy) and I became vegan. Let me assure you, however, one can still eat very well – and, rest assured, wine is a plant based extract! 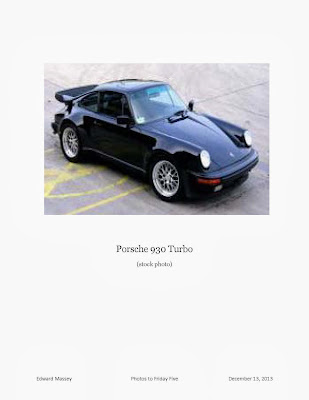 3. My favorite car I ever owned was??? Once upon a time, like October 16, 1987, a young man who worked very hard at his business finished a third day of helplessly watching the Dow decline first 95, then 58, and, on Friday, 108 points, in all an 11.6% decline in those sickening three days. He decided the amount of money he lost would have bought a Porsche 930 Turbo. He would have had a lot more fun and that investment in a little black rocket ship would never have lost as much money as the Dow. First thing, Saturday, he bought one. Monday, October 19, Blackest of Black Mondays, he put his theory to the test. Despite the 162 promised in the owner’s manual, he could not get it to top 155 mph. It didn’t bother him at all. The Dow lost 508 points, 22.6% (equivalent to a 3,525 point decline in today’s terms). It took him more than ten years to work up the confidence to sell the best investment he ever made. 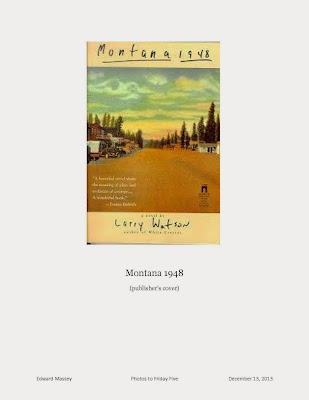 4. The best book I ever read is...??? an impossible question to answer, but I can tell you about a conversation that had the most impact on my thinking about writing in the past year. In a much abbreviated form and relying on the kind permission of John Nesbitt it went something like:
“My book’s about a sheriff and his posse in 1948,” I say in answer to John’s gentle inquiry.
“Have you read, Montana, 1948,” asks John.
“No, I haven’t.”
“Well, you might want to read it, just in case someone asks.”
And I did. And wow! There isn’t room in this blog to say all the reasons it was important, but it is a classic example of when you need a teacher, the universe gives you one. Thanks, John. 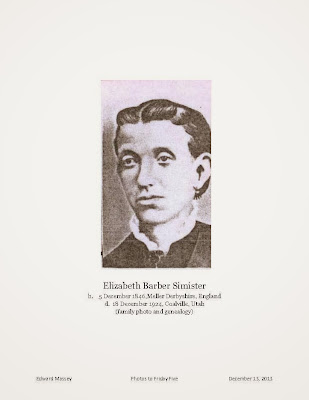 5. An interesting fact about my genealogy is...??? that my great- grandmother was the second and, we were always told, the least preferred of my great-grandfather’s two wives. She arrived in town, soon to be an orphan, as the entire company of Saints had foundered in the snows in Wyoming. After burying her parents, the Bishop grabbed my great-grandfather and explained in terms that were either persuasive or tones that were not to be ignored that he owed an obligation to take this orphan to wife and provide for her a roof and children. I remember seeing the roof as I grew up. I guess I am proof that he provided children.