Evil starts way off in the tule-boons. Mostly.

In many of our stories, the source of major conflict, the evil that stands against the good of our protagonists, starts far away from the hero. It could be in a faraway state or even a distant country. David Farland, a writing teacher I admire, puts it this way in his book Million Dollar Outlines: “The orcs are rampaging in the far lands in The Lord of the Rings, while in The Christmas Carol, Scrooge is asked to donate money to orphans in a distant colony.

“But as the tale progresses, the evil draws closer to the protagonist. Black riders enter the Shire, poverty strikes in the homes of Scrooge’s employees.

“Eventually, at the end of the tale, evil is seen in the hearts of the protagonists. Frodo discovers that he cannot give up the Ring at the Crack of Doom, while Scrooge learns that his own selfishness lies at the heart of the troubles around him.

“Thus, there must come a turning point where your character
sees the evil in himself and resolves either to change, or is destroyed. It is only when evil is subdued in the hero’s heart, that changes can be made abroad, and good can sweep over the earth.

“Because of this, as you plot, you need to consider carefully how to work toward turning points for each of your characters—whether they seize the opportunity to change or not.”

In my own Dollar a Day, danger starts far away. Tom Easter (must write a book about this man) comes to Sunset to recruit Real Lee to help protect some settlers. Here’s what goes on.

‘What about the job?’ Tom Easter asked.

‘Depends on what for,’ Real said.

‘Range rovers getting set to drive settlers out of Green Valley.’ Easter leaned forward, his eyes on Real’s face.

‘Sell them guns and let them care for themselves.’

‘Uh-huh. Can’t fight, but someone else can do the fighting for them.’

‘I don’t cotton to people getting strong-armed off their legal land,’ Easter said.

‘Man oughta defend what’s his,’ Real said.
‘
Yeah, but some can’t. Takes all kinds. What do you say? At least come with me to talk to them.’

‘I’ve been to Green Valley,’ Lightning said, ‘and I can
shoot.’
‘No fight for boys,’ Easter said. ‘Cyril Brocklin’s the big rancher in those parts, and I hear he’s hired Amos Dwyer up from Pecos country. Him and Tag Eidelbaur.’

Lightning said nothing, but his eyes took on an eager shine, and his lips parted as if in anticipation.

So we have the heroes needing to protect a group of sodbusters from someone who wants the land they’ve located their town on. The threat is far away. So far away, the Real Lee doesn’t feel any urgency or any pressing need to ride all the way to Green Valley to protect someone who should be able to protect themselves.

But trouble comes quickly. Real Lee has a reputation and he’s killed some folks. As he and Lightning Brewster walk out of the Rose of Sharon saloon, here’s what happens.

‘Real Lee!’ Three men stood in a line across the dusty street.

Real paused at the edge of the boardwalk. ‘That you, Red?’

‘Not man enough to come alone, then?’

‘We want you dead, Real Lee. Man or woman or day-old babe, it don’t make no difference. This is your last day.’

The man in the middle did the talking, big and sunburned, with oily black hair straggling from under his round-crowned hat.

‘I got the man on the left,’ Lightning said as he sidled
off away from Real.

Real gave a slight nod. ‘Red Skousen. If anyone dies today, you’re sure to be one of them. Doesn’t have to be this way, you know. Your brother came looking to make a name by besting Real Lee, but he died. No need for you to follow him.’ Real stepped off the boardwalk and started walking swiftly toward the three men, his hands swinging naturally at his sides. Lightning followed a step and a half behind.

Skousen took a step back. ‘Now Bert!’ he hollered, and clawed for the pistol at his side.

Real ran three light steps to the right and dropped to one knee. A rifle cracked from a rooftop. Dust spurted on a line with where Real had been. Lightning proved his name. His Remington was out and yammering before anyone else could draw. The shooter on the roof toppled, then the man on the left, whose gun was yet only halfway out of its holster when Lightning’s bullet took him in the throat.

Real’s Frontier was out. ‘Two dead, Red. Do you want more?’

‘Gol damn right,’ Red Skousen bawled. He raised his Colt for a shot, but a .44 caliber bullet from Real Lee’s gun smashed into the center of his chest before he could pull the trigger.

Lightning killed the third man in the street.

‘Damn, I hate this kind of thing,’ Real said. ‘Skousen didn’t have to die.’ He methodically ejected two spent shells from his Colt and inserted new cartridges from his belt.
Lightning reloaded his Remington and stuffed it back into the holster. ‘Law’s coming,’ he said.

So we have a reluctant gunman in Real Lee, Gabriel Winston Lee, that is. But the gunfight brings the feeling of danger a bit closer.

Then we move farther away, to the settlement Tom and Real and Lightning and others are supposed to protect.

The cabin door opened. A long spare man in a kneelength nightgown came out. ‘What can I do for you gentlemen?’ he asked.

‘You’ve been warned off Cibie land, Jackson, and you’re still here. Time has come to stop talking and start doing.

I’m giving you five minutes. Get everything you want to save out of that shack. When your time’s up, it’s gonna burn.’

‘Cibie’s run cattle here since before Jeffords made peace with Cochise. Mr Brockman ain’t about to let no gaggle of pumpkin rollers cut off Little Green Valley Creek water. Out!’

One of the riders dismounted with a gallon jug in his hand. He walked around the cabin, sloshing coal oil on its sides and splashing it on the planks of the little porch at the front door.

‘Watch me. You got three minutes.’

The lanky man disappeared into the cabin, shouting at his wife and children to wake up and get out. 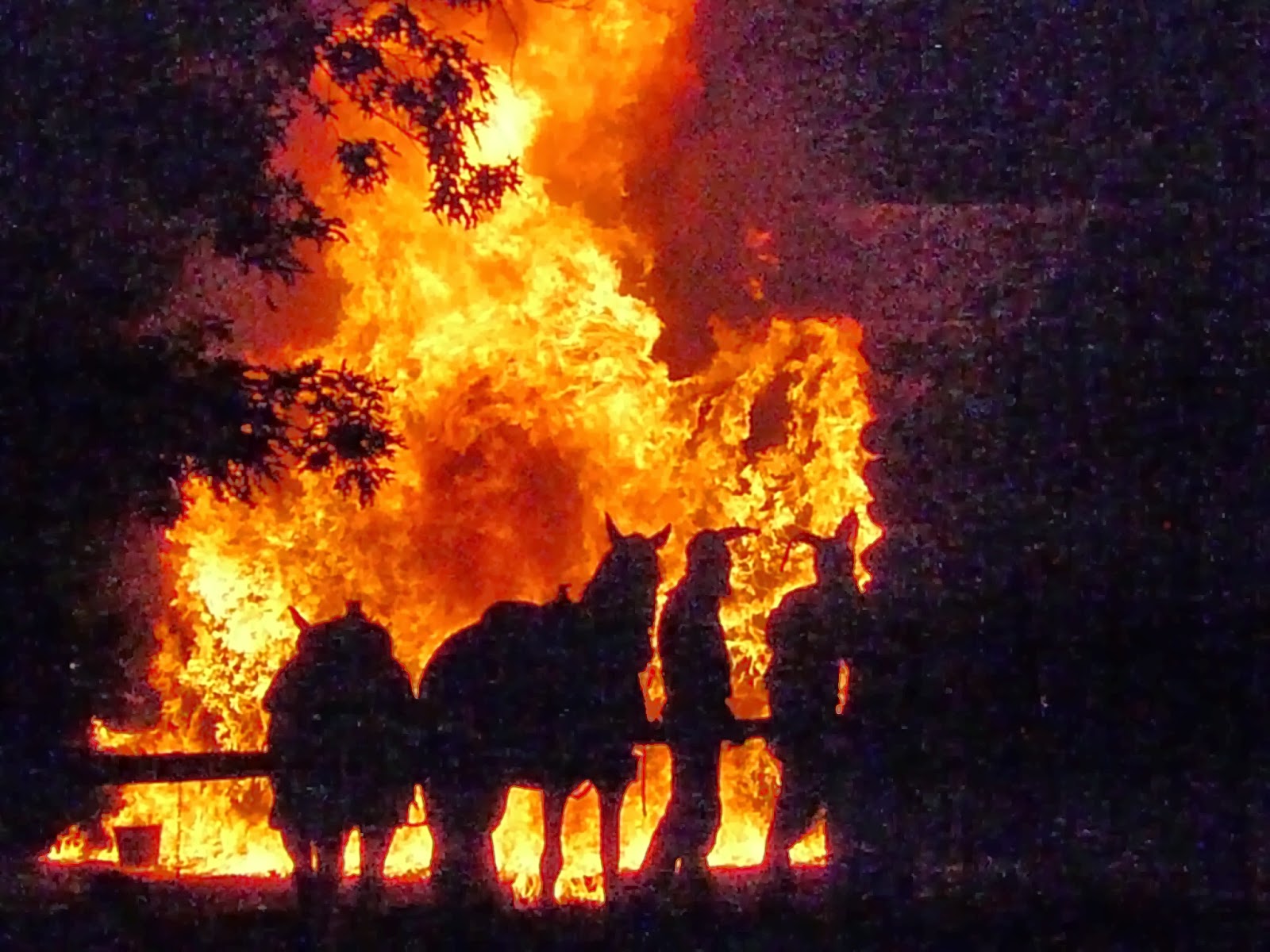 Ace Duggan called another man. ‘Winky. Go turn the cow and calf out of the corral and lean-to. We’re here to burn them out, not to kill good stock.’

‘Two minutes,’ Duggan yelled. He struck a Lucifer and held it to a coal oil-soaked rag on the end of a stick. The fuel lit with a little whump.

In seconds, a dozen torches blazed. Horses sidled around, nervous at the flames.

Jackson, a broomstick wife, and three children scuttled from the shack, arms laden with whatever they could lay their hands on in the seconds Bancroft had given them.

‘Burn it!’ Duggan tossed his torch. It arched through the cabin’s single oiled paper window, and flames began eating at the cabin’s insides.

The danger is palpable. You start to think Real and Tom and Lightning are up against some tough characters. Still, the final gunfight is not what you might think, yet I feel it left readers satisfied.

Pearson stopped the bay and sat with his hands on the saddlehorn, looking at Lightning. A slight smile touched his lips.

Real Lee stood at the side of the street, supported by Jorge Valenzuela. ‘Tate, I got a hole in my back and a crease in my head, but I’ll not have my friends doing my work,’ Real said. He shrugged off Jorge’s arm and walked stiffly to Lightning’s side. ‘I’m a walking wreck, Tate, but I reckon I can pull a gun. Lightning here’s the fastest man I ever saw with a sixshooter. You’d never clear leather against him. With me, at least you’ll have a fighting chance.’

Real shifted his attention to the other rider. ‘Amos, you’re quicker’n most, but Jorge over there and Lightning here will make sure you don’t butt in on this business between Tate and me.’

Tate’s smile widened. ‘Real Lee. You about through jawing?’

‘This ain’t no time for conversation,’ Real said.
‘
Let me say just one thing.’

‘I got hired to put a scare into a bunch of god-bother- ing sodbusters,’ Tate said. ‘We tried scaring them and we tried burning them out. Nothing worked.’

‘So you went after them with guns.’

‘How many of those settlers did we shoot, Real?’

Real thought for a moment. ‘None,’ he said.

‘I coulda killed you, Real, instead of giving you a few smacks. That said, I don’t cotton to what the butcher and Kyle Benford did to you.’

‘So where’s all this jawing going?’
‘
I told you it wasn’t over between us, Real, and I was hot under the collar when I said it. Men I’d hired went down under your guns. But that was before Benford had you bushwhacked. I don’t go for shooting a man in the back. If you’ll agree, I’ll leave. Me’n Amos’ll go back to Big Johney. Let bygones be bygones.’ 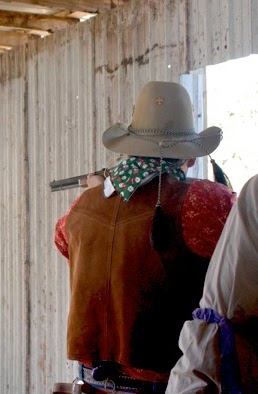 ‘What say?’ Tate asked, his hands still relaxed on the
saddlehorn.

Glass tinkled as a rifle barrel broke a pane from a window of the Branding Iron. Pearson Tate lifted the reins and would have touched the bay with his spurs, but a bullet knocked him from the saddle.

‘You lousy bastard,’ a frenzied voice shouted. ‘I paid you good money—’

From this point on, we go into the denouement, and the story winds down to where Real Lee gets offered a marshal’s job in Payson, where he accepts. So the point is, start off with your danger feeling far away. Bring it gradually closer and closer until you reach a climax, then back off a bit and let your bad men breathe. Some may not be as bad as you thought. And that’s OK, too.
Posted by ChuckTyrell at 3:22 AM