IT'S ALL LATIN AND GREEK

Doctors have long been known for the illegibility of their handwriting, especially on prescriptions. And they are renowned for tossing Latin and Greek names at their patients.

There is actually no excuse actually for illegibility in the practice of medicine. There is too much at stake to risk making a mistake with the name of a drug or with a dosage. Nowadays doctors will write legibly, or they will print to make sure that what they have written is correctly interpreted. Yet part of the reason for the illegibility of the past may have stemmed from the use of Latin and Greek words and abbreviations, which may have just not made sense to anyone who was not a doctor or a pharmacist.

Latin or Greek
For a so-called 'dead' language Latin has always enjoyed a healthy association with the medical profession. The fact is that Latin is the international language of medicine, just as it has been since the days of ancient Rome. Although the Romans were never great innovators in the field of medicine, they translated the medical works of their neighbours, The Greeks, into Latin and then disseminated the texts across their empire. And in that they did as great a service to mankind as they did when they gave us the aqueduct, concrete and the Roman calendar.

About 95 per cent of all medical terms are based on Latin and Greek. Most of the anatomical terms and the scientific names of micro-organisms are of Latin origin, whereas many of the pathological and medical terms come from Greek, or a mixture of the two languages. The Greek terms reflect the knowledge and skills of the early Classical Greek physicians whereas the Latin terminology comes  both from antiquity and from the Renaissance, when Latin became the language of science and medicine. The beauty of it is that because Latin is a dead language it is unchanging, hence its suitability as an international medical nomenclature.

Galen
Milburn Stone, who played Doc Galen Adams in Gunsmoke was allowed to chose the name Galen when the show transferred from radio to television. Hence, Doc Galen Adams.

It was a good choice, because Claudius Galenus of Pergamum (1D 131-201) was an ancient Greek physician whose teachings dominated European medicine for over a thousand years. In addition, he was the first real anatomist, who performed numerous dissections on different species of animal. 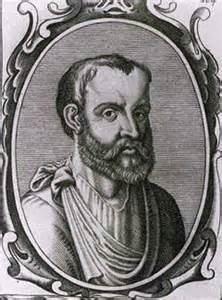 Galen studied in Smyrna and in Corinth and at Alexandria, returning to Pergamum (in modern day Turkey) in AD 157, where he worked as a physician in a gladiator school. During that time he gained valuable experience in trauma care.

Galenicals
These were drugs used after the fashion of Galen. Essentially, they were drugs used to correct imbalances in the body humours or the four vial fluids. Excess heat, for example, required a cooling Galenical. The common vegetable cucumber was such a cooling Galenical. A hint of this is contained in the common phrase 'as cool as a cucumber.' Interestingly, cucumbers contain salicylates, which are actually cooling or anti-pyretic.

SOME LATIN DOSAGE INSTRUCTIONS
We sed to use a lot of these, but nowadays the trend, certainly in the UK, is to use English words. Yet still a lot of abbreviations are still used in prescription writing.

Prescription
This is the written instructions for preparing a drug. It comes from prae, meaning 'before' and scriber, meaning 'to write.'

The prescription traditionally has four components:

The superscription or heading, which starts with the abbreviation Rx, from the Latin recipe, meaning 'take (thou)'

The inscription, which contains the name of the medicine or drug and their quantities. Often abbreviated mitte, meaning 'give this number.'

The subscription or directions for compounding the drug. This is nowadays usually omitted because most drugs are pre packed and merely require to be dispensed.

The signature, indicated by the abbreviation sig, from the Latin signs, meaning 'mark,' which indicates to the pharmacist or druggist what instructions should be marked o the medicine for the patient.

Signatures
These may  account for that seeing illegibility on doctors' prescriptions. Many of them are redundant nowadays, as I indicated earlier, but you may want to pepper your stories with the odd one or two of these if you are featuring a doctor character.

These were either written in full or as abbreviations.

absente febri - 'in the absence of fever'. The abbreviation abs feb used to be written when it was indicated that a remedy should be given only if a fever was absent.

ad - 'up to.' This was used when a limit was placed on a number of doses, so no more should be taken after that.

ad libitum - 'take freely.' This would only be used with an innocuous remedy, such as a simple cough remedy tat did not contain a drug.

admove - 'apply (thou)'  This instruction to the pharmacist is to write that a cream, embrocation or liniment  should be applied by the patient.

ad parten affectum - to the part affected.'  It could be abbreviated to ad part affect.

adstante febri - 'while the fever lasts.' The remedy should be taken for as long as a fever lasted.

alternis diebus - 'every other day.' It could be written alt die.

alternis horis - 'every other hour.'

ante cibos - 'take before food.' Could be written a.c.

bolus - 'a single shot,' from the Greek bole, meaning 'a throw.'

durante dolore - 'while the pain lasts.' 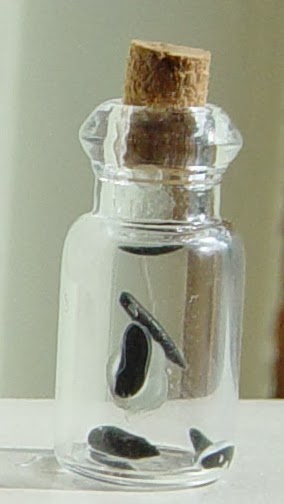 All docs had a bottle of leaches

lateri dolente - 'to the panful side.'

misce fiat mistura - ' let a mixture be made.'

pro re nata -' take as required.' Often written as prn.

Well, at least I didn't handwrite this blog! 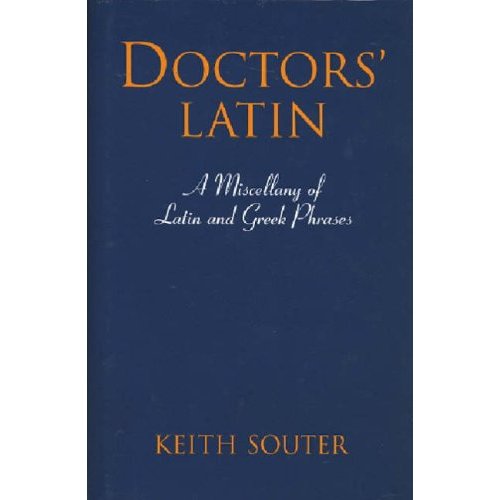