Review Roundup: Vengeance is Mine 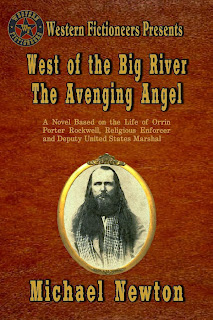 Orrin Porter Rockwell was nothing if not controversial, even during his lifetime. A giant of a man, so poorly educated as to be semi-literate, he nonetheless appeared to possess a frightening intelligence matched only by his skill with weapons and his willingness to use them in service of a peculiar sense of justice informed more by his religious convictions than the law.

In West of the Big River: The Avenging Angel, author Michael Newton fictionalizes a complex character historians still debate. Rockwell was an early convert to Mormonism, a latter-day faith most considered a dangerous cult in its early days — for good reason. The history of the Church of Jesus Christ of Latter Day Saints is fraught with violence, much of it directed at the outside world in retaliation for what the church and its members considered religious persecution.

Newton’s characterization of Rockwell as a cool, calm, analytical religious fanatic is positively chilling. An enforcer for Mormon leaders Joseph Smith and then Brigham Young, Rockwell also bore a deputy U.S. Marshal’s badge, essentially giving him a license to kill. As portrayed by Newton, Rockwell, a master at rationalization, employs his badge as judge, jury, and executioner for accused lawbreakers who have harmed church members. In his mind, Rockwell is saving sinners’ souls through blood atonement.

Even more chilling: By the story’s midpoint, the church’s avenging angel draws readers to his side.

The first quarter of The Avenging Angel reads more like a history text than a novel, but the background — shot through with Rockwell’s idiosyncratic take on the issues — fascinates and is necessary for character development. When Rockwell finally embarks on the quest that forms the story’s backbone, the pace picks up and readers will begin to identify, reluctantly, with a protagonist who is understandable but unsympathetic in the beginning. The marshal is out to determine what happened to a group of Mormon silver miners who vanished without a trace. If foul play was involved, he’ll dispense justice on the spot, as usual. Realizing the infamous sword of the Mormon Lord is among them, the people of a small mining town take steps to ensure what Rockwell perceives as Sodom and Gomorrah combined doesn’t become Hell on Earth.

The mystery of the miners’ disappearance and Rockwell’s response to the forces aligning against him make an entertaining read. With The Avenging Angel, Newton does an excellent job of illustrating a fiction-writing tenet too often overlooked: Every character in a tale, even the villain, is the hero of his own life story.

Kathleen Rice Adams is a Texan, a voracious reader, a professional journalist, and an author. She received a review copy of West of the Big River: The Avenging Angel from the publisher. Her opinions are her own and are neither endorsed nor necessarily supported by Western Fictioneers or individual members of the organization. Links in the review are for convenience only; they do not produce affiliate revenue.