In the Old West, a man had to know how to cut another to the quick without cursing. As we've already discussed, cursing was taboo, especially in public or in the presence of a woman. Yet there are times when a man just needs to vent his feelings. Here are some choice insults and descriptions from the Old West for your enjoyment.

Anger:
When I'm done with you, there won't be enough left of you to snore.
He was mad enough to swallow a horn-toad backwards.
He was so mad he could bite himself

Bad Tempered or Generally Unpleasant:
He's so mean he'd steal a fly from a blind spider.
He was so mean, he'd fight a rattler and give him the first bite.
He was mean enough to steal a coin off a dead man's eyes.
He made an ordinary fight look like a prayer meetin'.
He was mean enough to eat off the same plate with a snake.
He was mean enough to hunt bears with a hickory switch.
He didn't have manners enough to carry guts to a bear.
He's as welcome as a rattlesnake as a square dance.
He's so crooked, he could swallow nails and spit out corkscrews.
He told lies so well a man would be a foot not to believe them.
He's as crooked as a dog's hind legs.
He's lyin' like a rug.
He ain't fit to shoot at when you want to unload and clean yo' gun.
He's as popular as a wet dog at a parlor social. 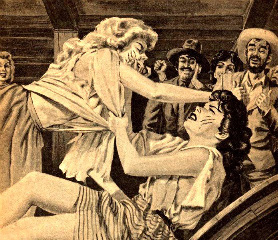 Mental State:
He was crazy enough to eat the devil with horns on.
He's off his mental reservation.
His intelligence shore ain't at this camp.
He's as crazy as popcorn on a hot stove.
He's as crazy as a sheepherder.
Somebody stole his rudder.
He's crazier than a run-over coon.
He's studying to be a half-wit.
He ought to be bored for the hollow horn.
His brain cavity wouldn't make a drinkin' cup for a canary.
He couldn't teach a hen to cluck.
He knows as much about it as a hog does a hip pocket in a bathing suit.
His knife's so dull it wouldn't cut hot butter.
He don't know dung from wild honey.
If all his brains were dynamite, there wouldn't be enough to blow his nose.
He couldn't cut a lame cow from a shade tree.
He couldn't track an elephant in snow.
He was so dumb he couldn't drive nails in a snowbank.
He's as dull as dishwater.
He don't know any more about it than a hog does a sidesaddle.
He is plumb weak North of his ears.
He can't tell skunks from house cats.
He had a ten dollar Stetson on a five-cent head.
His family tree was a shrub.
He couldn't track a bed-wagon through a bog hole.
He didn't have nuthin' under his hat but hair.
He couldn't hit the ground with his hat in three throws.
He was as shy of brains as a terrapin is of feathers.

Physical Appearance:
He was uglier than a new-sheared sheep.
He has teeth so crooked he could eat corn on the cob through a picket fence.
His face was puckered like wet sheepskin before a hot fire.
Her face looks like a dime's worth of dog meat.
He was ugly as a burnt boot.
He was so ugly he had to sneak up on a dipper to get a drink of water.
He looked like the hindquarters of bad luck.
His lip hangs down like a blacksmith's apron.
He looks so bad his ears flop.
She's so ugly, she'd make a freight train take a dirt road!
He's as ugly as homemade sin.
She's so ugly she could bluff a buzzard off a meat wagon.
He's as ugly as a mud fence.
He is so thin he could take a bath in a shotgun barrel.
He was so fat, you'd have to throw a diamond hitch to keep him in the saddle.
If he closed one eye he'd look like a needle.
He is built like a snake on stilts. 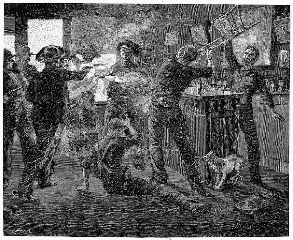 Additional Insults:
His voice sounded like someone forgot to grease the wagon.
His singin' was enough to make a she-wolf jealous.
He punished the air with his singing.
He had a voice like a burro with a bad cold.
He couldn't hit a bull's rump with a handful of banjos.
He was as drunk as a fiddler's clerk.
She's as nervous as a long-tailed cat in a room full of rocking chairs.
He'd been in the desert so long, he knew all the lizards by their first names.
His mustache smelled like a mildewed saddle blanket after it had been rid on a soreback hoss three hundred miles in August.
He was grittin' his teeth like he could bite the sights off a six-gun.
This saloon's so bad, a rattlesnake'd be ashamed to meet his mother.
He lasted as long as a pint of whiskey in a five-handed poker game.

A Dictionary of the Old West, Peter Watts, 1977
Legends of America website: www.legendsofamerica.com