So many people and events shape our lives. Sometimes it’s hard to put my finger on why some things interest me and some things just don’t. The Old West doesn’t just interest us, though — it fascinates us.


Owyhee County, Idaho, was (still is) a wonderful place for a kid to grow up. My parents owned a farm — we milked around 150 head of Holsteins besides growing wheat, barley, sugar beets, silage corn, and alfalfa. I had a magic magnifying mind right from the get-go. Why couldn’t we live on a ranch? Why couldn’t we have spring round-ups?


Ah, I wanted a horse in the worst way. Finally, the Christmas when I was six, my dad bought me a Shetland pony. Before that, I thought he loved me, but giving me a horse possessed of the very devil, well, I had my doubts. The pony’s name was Smokey. He was what they call a proud gelding, where the castration gets rid of all the baby-makin’s but not the hormone factory.


You make the best of things, though, and Smokey grudgingly trudged all over every inch of Graveyard Point, a hill about a 1.5 miles from our place. My riding partner was my step-aunt (only two years older than me), and what a sight we made when she rode her thoroughbred named I-Pass with Smokey trotting along behind, me pulling leather. You see, Smokey was so fat that the saddle, no matter how tightly cinched, rolled from side to side about 30º each way. It was all I could do to stay upright.


Smokey and I did have a few adventures — here’s one. The dairy herd’s pasture was a half-mile long, and of course those danged cows had to wander clear to the other end right about milking time. It was my job to fetch them. I was probably about eight years old, when one day, I got this Bright Idea to drive them in on my trusty steed. Yes, my own personal cattle drive. It would be just like riding on the range like my cousins. So I saddled up Smokey and away we went.


Those Holsteins simply weren’t impressed with Smokey and me. I yipped and hollered. I waved my rope. I rode Smokey right up to the cattle, head to head. Not really, because those cows stood about a foot taller than my pony. Speaking of heads, not a one of those danged cows even raised her head. They just kept chomping along, ignoring us.


Back at the barn, Dad, helpful man that he was, saw that my horse and I were having some difficulty, so he cupped his hands around his mouth and bellowed, “s’boss!” Then those evil cows did finally stop grazing. Dinner time! And they took off for the barn. This was good, except...


By then, I’d given up and was riding back to the barn. When you see 150 critters bigger than you and the horse, it strikes fear in an eight-year-old’s heart, so I kicked old Smokey into a trot (easier said than done). For some reason, those stupid cows started chasing my stupid horse. He picked up to a gallop (probably the first time ever) tossing me from side to side on his roly-poly hide. He took off for the fence, running along it as fast as his stubby legs would go.


Remember that barbed wire? Just as he got there, splashing water six feet in the air and soaking us both, the saddle slipped toward the fence side. I knew I was gonna die. He galloped along the fence about 1/16” away and I was about to be cut to ribbons and electrocuted to boot, so I had to fling my left leg over to the right and ride sidesaddle. Then the saddle slipped some more, racing by the sharp barbs about an inch from my nose.


I finally made it to the barn, the pony’s sides heaving, me in dire need of a stiff shot of Jack Daniels. Dad laughed so hard, his eyes were teary. Smokey and I failed Cowpunching 101.


So I didn't exactly cut it as a top cowhand. Some women truly did, though.


Let's talk about the women who thrived in the West. Western women weren’t merely transplanted Eastern women. For the most part, Western women had more rights and were far more “modern” in their thinking. Wyoming granted women’s suffrage in 1869. Most of the western states and territories were far ahead of the eastern states when it came to suffrage, property rights, and marital law. Many entrepreneurial women owned land and businesses in their own right.


With that in mind, let’s look at two women who shaped the character of Janelle Kathryn (aka J.K., shortened to Jake) O’Keefe, the shapely red-headed heroine (think Maureen O'Hara) in Much Ado About Mavericks (Hearts of Owyhee #3).


A lot of you know the story—Joe Monaghan was a woman who lived as a man in Owyhee County, Idaho Territory, for forty years. They even made a (very fictionalized) movie about her. But that’s not what interested me. What I found intriguing was what she actually did. As a member of the “weaker sex,” here’s a list of accomplishments: 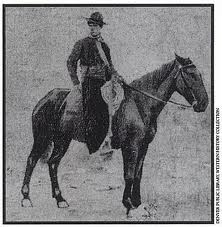 Now does that sound like the “weaker sex” to you? This is not an easy country to ranch in, either.  My friend, Ken Stansell, tried to ride his motorcycle to her place.  Take a look: (be prepared to listen to a motorcycle.)

Now, we’ll go to a girlie-girl, a very feminine woman who you’d think would be the epitome of Victorian propriety. She also lived in Owyhee County. I’m referring to Kitty Wilkins, who, to this day, holds the record for the largest horsetrading deal in North American history. 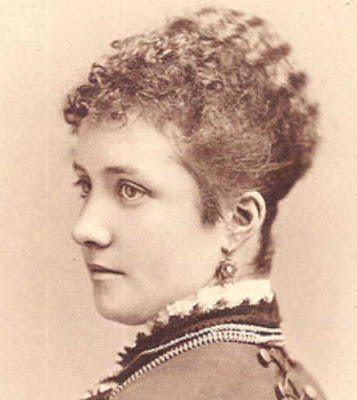 The Sioux City Journal of Sioux City, Iowa, described Miss Wilkins as "a tall stately blond, with fluffy, golden hair, large blue eyes that have quite a knack of looking clear through one, regular features and pearly teeth which glisten and sparkle when she smiles, and she has a habit of smiling very frequently. Her lips are red and full, and her mouth and chin denote a certain firmness of manner, no doubt acquired in her peculiar calling."


Yet this woman could wheel and deal with the best of them. She knew horseflesh better than most men, and she understood the business. Find out more about Kitty Wilkins: Horsetrading in Petticoats at Romancing The West.


So how did Little Joe Monaghan and Kitty Wilkins become Jake O’Keefe? I guess it just happens when visions mix up in the ether. Out came a beautiful woman who looks like Maureen O’Hara but is living in a man’s world where she has to make do with what she’s got. And what she has are the skills to make her the best foreman in the territory. She’s confident, competent, and bold. She wears clothing appropriate to her job; hence, britches instead of skirts. Only the strongest of western heroes could match her without damaging his ego. (Maybe a little bump or two here and there.)

Much Ado About Mavericks

Now who would make the most improbable mate for a woman of this background? A Boston attorney. Yep. So that’s just what I gave her, and it was rather fun watching her work all this out. Sometimes an author needs to stay out of the way and let the characters tell the story, and believe me, no one gets in Jake’s way. Well, except for Ben. Whoo-baby!


♥ FIVE STARS! Jacquie Rogers writes some of the best Historical Romances on today's market. Not content to simply write a plot and toss in a lot of bed scenes and/or filler, this author adds in subplots, humor, action, suspense, and some endearing strays. ~Detra Fitch, Huntress Reviews

About Much Ado About Mavericks

Benjamin Lawrence is a highly respected attorney in Boston, but in Idaho Territory, they still think of him as that gangly awkward boy named Skeeter. When he goes back home to settle his estate, he's confronted with a ridiculous will that would be easy to overturn--but can he win the regard of his family and neighbors--and the foreman?


The Bar EL's foreman, Janelle Kathryn aka J.K. aka Jake O'Keefe, is recognized as the best foreman in the territory. But being the best at her job still isn't enough--now she has to teach the new owner how to rope, brand, and work cattle before she receives clear title to her own ranch, the Circle J. The last thing she expects is rustlers. Can she save her ranch without losing her heart?

Posted by Jacquie Rogers at 2:07 AM