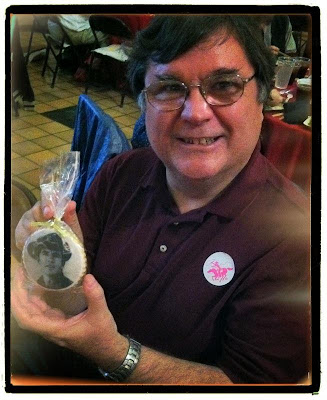 A Civil War doctor loses his family, and his right arm, to a group of psychopaths who’ve come to rob them, and leave everyone dying or dead. The doc replaces the missing limb with a double-barreled shotgun, and goes after them.

That was the flicker of a movie idea I had, and I figured if I pitched the script, with a little luck, someone might make it as a wild, low-budget western.

That did not happen. Many times.

What did happen: on December 3rd, thanks to editor Gary Goldstein, Pinnacle Books released SHOTGUN, a mass-market paperback, from a first-time novelist, but not first-time writer.

And the process only took fifteen years.

To play off the old saying, I probably could get arrested in L.A., but as far as my screenwriting, producer’s interest had waned, and so had the enthusiasm of the folks representing me. A lot of freedom can come from having nothing to lose, so why not do what you love? This was years before DEADWOOD, and when I told my agent about my exciting plan to start a western, he looked at me like I’d shot his dog, then run it over to make sure. There was a mumbled “good luck,” and I hit the road. 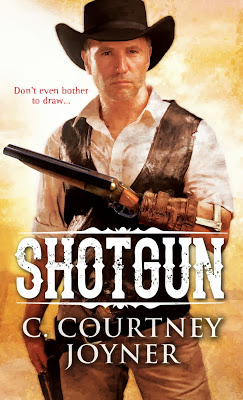 Crossing state lines, with Ennio Morricone blasting, I noodled the script. Deep into Euro-westerns like A MINUTE TO PRAY, A SECOND TO DIE, and wanting to attempt that tone, I banged out a story treatment on a PC at the public library, and FAX’d it to producers, positive they’d think it great.
Responses ran the gamut from a polite, and puzzled, “No,” to an outraged phone message demanding to know why the hell it had been sent.

Life went on, even if the screenwriting didn’t. A teaching gig fell through, so I became the oldest trainee at a hundred-seat movie theater in Nags Head, North Carolina. As the low-man, my big job was scraping gum off the auditorium seats with a screwdriver, giving me a lot of time to think about shifting gears.

Screenwriting isn’t really a primer for other types of writing. The demands are unique to the form; words often have to be spare, while getting over a lot of information. Descriptions, clinical, and dialog the focus.

My bookshelf, sagging with westerns, taunted me about SHOTGUN. I’d devoured George Gillman’s THE EDGE and Joe Millard’s Man with No Name books, between re-reads of Elmore Leonard. Series titles, movie tie-ins, and the classics, all got equal quarter, and I wanted to attempt something of my own, but I didn’t see my little idea as prose fiction.

A story hangs around your neck just so long before it has to be put down on paper, and I’d gone way beyond the limit. Years passed, I was back in Los Angeles, nailing a few screenwriting gigs with a job at a video store filling in the gaps. And SHOTGUN kept nagging me. The movie idea was dead, but I wanted it to exist somewhere.

I went for the comics.

I wrote a comic book script, and partnered with veteran artist Gerald Forton, who drew five great sample pages. Forton had worked for Marvel and DC, and comic publishers loved the project. If we delivered a finished book on spec, which would be hundreds of pages of art, they’d put it out, but wouldn’t commission it. SHOTGUN faded again. 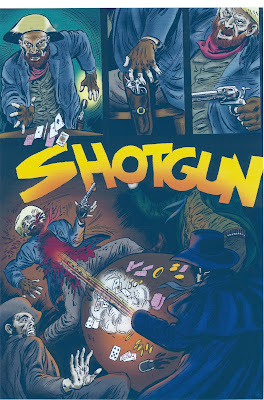 During this time, I’d managed to get accepted into The Western Writers of America, because of my movie journalism, and went to my first convention in Springfield, Missouri.

">
It was an eye opener. Not only did I meet great writers I’d admired for years, everyone was amazingly generous with advice, and patient with my newbie questions. New friends, who became lifers, and some legends of the genre gave me encouragement, and pointed me toward short fiction.

I also met Kensington editor Gary Goldstein for the first time. Gary knew about my old horror flicks, and we talked movies and more movies. He opened the door for me to work on a few cinema books, then asked me about my plans for fiction. Through the efforts of Matt Mayo and Larry Sweazy, I’d now been anthologized a few times, and wasn’t quite as unsteady on my feet as I’d been. Gary placed my short story “Two-Bit Kill” in LAW OF THE GUN.

I decided to take a new look at SHOTGUN, and the years of material I had on it. That’s when I had one of those mental lightning strikes that changes lives: this could be the first animated spaghetti western!

A lot of work went into that presentation, before it limped into its own grave.

A few conventions later Gary casually asked about fiction, and I sent him every single piece of artwork, breakdown for every TV episode, issue of the comic book, and movie treatments. Considering all the reactions I’d had for more than a decade, I was stunned when he sent an e-mail saying, “We’re in business.”

You’d think with all that preparation, the writing would be a breeze, but it was a struggle to get to the end. The curve was damn steep, but with my editor’s patience and the advice of great writer friends, I learned how to shift gears.

Lord only knows what the reaction is going to be.

This journey wasn’t about amazing resilience on my part, but rather that ideas have a way of sticking with us, of pushing their way through, until they find their own best home. It might happen in a day, or in fifteen years, but there’s no way to say that the trip isn’t worth it.


POSTSCRIPT: This piece was written for TRUE WEST Magazine, and appeared four weeks before SHOTGUN’s release. The book hit the shelves at Target, Walmart, and Books-a-Million, and sold well. In some places, actually selling out, which was an astonishing surprise. Now, I’m slogging through the sequel, a little better equipped for the task, and very grateful for another chance.