Certain names are known in the West, famous and infamous. Clay Allison is one. He’s known as a man with a very short fuse, which seems to be true.

In the 1981 quarterly of the National Outlaw & Lawman Association contains a major article on Allison, written by James Steven Peters. Let’s see what he says.

Clay Allison was born in 1841 (just 100 years before me) in Clifton, Wayne County, Tennessee (so he has something in common with former WF president Troy Smith). He was the oldest of four siblings, two brothers and a sister.

He enlisted in the 9th Tennessee Cavalry a year and a half after the war started, and he was 21 years old at the time. A fact that leads one to assume Clay was not burning with patriotic fever at the time. He was a private, and remained one until the war was over. He was on the Roll of Prisoners of War as a private in Company C, 9th Tennessee Cavalry. His commander was 1st Lt. B.S. Harden. Captured on May 6, 1865, he was paroled at Gainsville, Alabama, on May 10. At that time, writes Peters, Allison sported a short beard and moustache, sort of a rough Vandyke. It was no doubt in complementary imitation of General Nathan Bedford Forrest, his commanding general. The beard and moustache remained for the rest of Allison’s life. 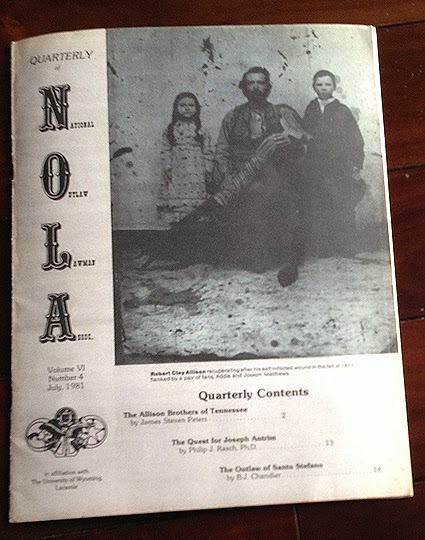 Hardly had Allison returned to Clifton than he left, headed for Texas with his siblings in tow. He was 23, brother Monroe was 21, sister Saluda was 18, and the youngest, John, was 11. Across Texas they went, all the way to the Panhandle, probably close to the Washita River.

Cattle was fast becoming king, and hardy men roped thousands of wild longhorns to be sent to market, including Lewis George Coleman and Irvin W. Lacey. These men hired the Allisons and Coleman eventually married Saluda.

With these men, the Allisons moved into northern New Mexico in the late 1860s. They drove large herds of cattle into the area at least once and probably several times. As part of their pay, the Allison’s received 200 head of cattle, their starter herd.

The Allison brand was the boxed circle, and they set up a squatters ranch at the junction of the Red (now Canadian) and Vermijo Rivers, about nine miles north of Springer. Note that the Allisons did not lease or buy any land. Coleman and Lacy bought their property from William H. Stockton in March 1873.

Soon thereafter, we come to know Clay Allison as a man to avoid. He became a debt collector for Coleman and Lacy. Strangely enough, the debtor was the above mentioned Stockton and another man named Wilburn. Both put him off. Wilburn’s delaying tactics got under Allison’s skin, so he confronted the debtor with a drawn six-gun and told him that if he didn’t pay up immediately, he, Allison, would terminate his existence. Wilburn talked Allison into granting him another delay, then promptly left the country.

Apparently Clay Allison was a man to be avoided if he was drinking. For no apparent reason he began throwing his knife at people in a bar in Cimmarron. One such target, a man named Lee, got his arm pinned to the door by the shirtsleeve. He broke and ran. Then Allison tried to set up Melvin Mills as his target, but Mills also ran. As he hastened down the street, he met Dr. Robert Longwill. He told the doc what was going on, and said he was going for his gun so he could kill Allison, in self defense, of course. The doctor said he’d handle it as he didn’t think Allison was a “bad sort.”

The two men were in Mills’s office when the doctor saw Allison coming down the street horseback. Mills ran out the back door, and the doctor slunk out, hoping to avoid Allison’s attention. No such luck. Allison hailed the doctor, who told the gunman he was acting badly. Allison laughed and said he had nothing against either Mills or Lee, and would do anything Dr. Longwill requested, but that he wanted Wilson’s ear (no indication of who Wilson is). He rode away to look for Wilson.

Time is of the essence, so I’ll leave Clay Allison right here at the start of his career as a bad man. Next month, the rest of the story.
Posted by ChuckTyrell at 11:09 AM