THE INDISPENSABLE HORSE by J.E.S. HAYS

What would the Old West be without the horse? A man afoot, or footermans, was reduced to the lowly act of walking where he needed to go, and what cowboy would be caught dead without his trusty hayburner beneath him? The horse was truly indispensable: the original engine upon which all further mechanical power is measured. Whether pulling a wagon (or plow) or carrying a rider, the horse allowed mankind to spread beyond simple villages and explore the world. 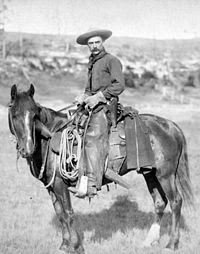 This will be the first of several articles about the horse. Further columns will explore the world of riding, saddles and tack, and the art of identifying horse breeds and colors. 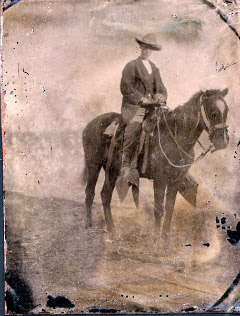 Here are some of the basic terms used in the Old West:
Band: a bunch of horses, either wild or in remuda
Bottom: stamina or staying power of a horse
Bridle-wise: a horse expertly bridle-trained
Bronc: originally an unbroken horse, this term came to mean any cowpony
Buzzard bait, Crowbait: a worthless horse, one fit only to feed the carrion birds
Buzzard head: a mean horse
Camp staller: a horse reluctant to leave the camp and get to work in the mornings
Carver, Carving horse, Chopper, Cutter, Cutting horse: a horse trained to select and remove cattle from the herd
Cavvy-broke: not broken to saddle but tame enough to run in remuda
Churn-head, crock-head, crowbait, hame-headed: a dumb, stubborn horse
Clear-footed: a horse with a clean and sure gait
Cloud hunter: a horse that likes to rear
Cold-jawed: a horse having an insensitive mouth, unresponsive to the bit
Coon-footed: a horse whose rear feet aren't straight
Cow horse, Cowpony: a horse trained to work cattle
Dead-mouthed, hard-mouthed: a horse that is unresponsive to the bit
Dude horse: "a plumb gentle horse that will allow kids to crawl up its legs or dudes to sit on it" (Rossi, 1975)
Easy keeper: a horse that thrives on any feed
Jingle: to round up the horses, which are then kept in a jingle pasture (fenced and near the cowboys' quarters) for easy access
Jug-head, Knothead: a horse without sense
Lady-broke: a horse so well-trained that a lady can ride it; the opposite of cavvy-broke 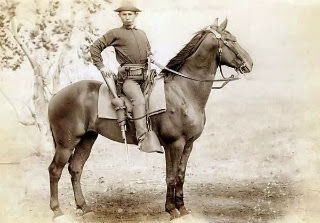 Long horse: one with endurance
Mount, String: the team of saddle-horses allotted to one cowboy on a ranch or trail drive. Typically, it comprised four to six mounts or more: a cutting horse, roping horse, swimming horse and night horse, plus one or two broncos who were in training. The string belonged completely to the cowboy it was assigned to – he was responsible for it, and it was hands-off to everyone else. Outfits kept strings together from each rider to his successor. The new cowboy was never told anything about his string; the assumption was that if he was a good rider, he would need no advice. If a cowboy broke his string by losing a horse or getting one hurt, it was considered a bad omen. For the boss to break a string by assigning one of the horses to someone else was the same as telling the cowboy to find another job.
Oily bronc: a mean horse
Outlaw, renegade, widow-maker: a mean, uncontrollable horse
Owlhead: an untrainable, unridable horse
Pecker neck: a horse trained for riding, but not for cattle work
Pegger: a cutting horse skilled in sharp turns
Plug: a broken-down horse
Pudding foot: an awkward horse with big feet
Range Horse: one that is allowed to run wild part of the year, while working for the rest
Rank: how a cowboy describes a vicious, hard-to-handle horse
Raw bronc, Raw one: an unbroken, green, or inexperienced horse
Remuda. Saddle-stock: saddle horses of a ranch or trail outfit (horses are said to be "in remuda")
Rough string: the left-over horses none of the workers wanted as part of their string
Saddle-broke: trained to carry a saddle
Scrub: a horse of such poor quality that no one would wish to breed from it
Soft-mouthed, Sweet-mouthed: a horse sensitive to the bit
Sour-mouthed: a horse that worries at the bit
Sugar-eater: a pampered horse that is fed treats
Sunday horse: one chosen for its good appearance, behavior, and handsome gait
Top horse: the best animal in remuda
Uneducated: an unschooled horse
Whey-belly: a pot-bellied, inferior horse