I've been researching the history of suffrage in England for the cozy mystery series I'm writing with a partner - Book 1 is coming out September 23rd this year, and Book 2 in 2015. It's been fascinating, but I also remember researching a little about suffrage in Wyoming while writing Double Crossing.

It seems odd to me, as a modern woman, to consider that less than half a century before my birth, women marched in the thousands to fight for their voting rights. But hold on a minute -- turn the clock back years before the 19th Amendment was ratified in 1920, back to when the United States was born. Did anyone notice that there are no signatures of famous women on the Declaration of Independence? Women who were free and had property could have voted -- and some did -- but they lost that right in New York in 1777, in Massachusetts in 1780, in New Hampshire in 1784. New Jersey, however, didn't revoke the rights of women voters until 1807.

The founding fathers, Jefferson and Adams especially, had no intention of allowing women a voice. Adams replied to his wife's urging to "remember the ladies" in coding the new laws with a tease that men were already subject to the "despotism of the petticoat." And so, despite Abigail Adams' (and other women's) support and help behind the scenes, Adams and the other "fathers" cut women out of having a voice in the government. Hmph. 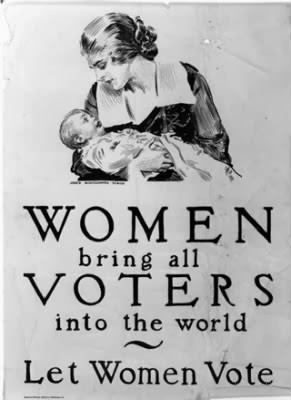 But enough grumbling. So why did Wyoming Territory choose to grant women citizenship and voting rights? Why would they risk angering the men who lived there? Especially given the six-to-one ratio of men versus women residents. For that reason alone, legislators no doubt wanted to draw more women out west and bring a more civilized atmosphere to Laramie and Cheyenne. Perhaps they hoped that women would be grateful for their unique opportunity and vote with those who granted them the right. There was opposition, too.

But one thing is certain -- Wyoming certainly received a load of free publicity over the issue. Some of the legislators did believe that women ought to have the same rights as African-Americans (men, of course) who gained citizenship and voting rights by passage of the Fourteenth Amendment on July 9th of 1868. And remember, all of the Southern states had to ratify that amendment in order to re-enter the union. 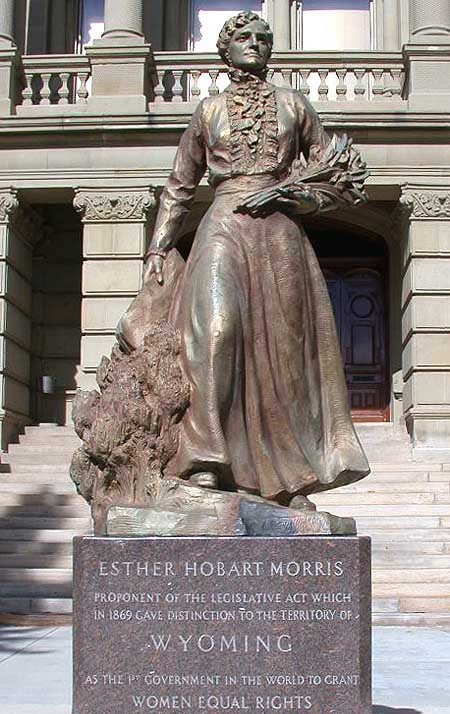 Whatever the motives, Wyoming approved suffrage for women on December 10th, 1869 -- half a century before the other states. Women seemed to have many firsts in the western Wyoming territory. Early in 1870, Esther Hobart Morris was appointed a Justice of the Peace since the previous man had resigned in protest after the vote for suffrage. She even had her own husband arrested once since he was a drunk, a gambler and idle.

To the left, a statue of Esther Hobart Morris stands in front of the Cheyenne State Capitol. A bronze copy of the statue is also in the U.S. Capitol's National Statuary Hall Collection in Washington, D.C. I felt pride for Wyoming's women when I visited there a few years ago, since she was the first woman appointed to public office. And Kansas claims Susanna Salter as the first elected mayor (1887). Hooray for western pioneer women!

Wyoming women were also called to served on juries after the suffrage vote. And in September of 1870, almost 1,000 women voted in the territory's second election. To think it took another 50 years before the rest of the women living in America could take a ballot.

Our foremothers fought hard to gain voting rights. So next time there's an election, ladies, make sure you vote. We owe them that much.

Meg Mims is one half of the D.E. Ireland team writing the Eliza Doolittle-Henry Higgins cozy mystery series for St. Martin's Minotaur, coming out in September 2014. She’s won a Spur Award and a Laramie Award for her western mystery series and also writes sweet dog/cat rescue romance novellas. Meg loves books, flower gardens, visiting tearooms – anything to get out of dusting. Vacuuming does help plotting, though.

Sources: www.wyohistory.org, www.history.com
Posted by Meg at 3:00 AM