An Outlaw's Day Off

Historical novels are a different kind of beast; you do your research, you write your book. Some facts you include, others you leave out, and the rest you make up to suit whatever story-telling goal you've got in mind. Then there are the bits you miss.

You call it a novel because there's a story you want to tell, an angle you want to reach thinking - hoping - the way you've put it down will reflect the illumination you're trying to achieve without corrupting the shine of the history you've set it in. But sometimes you miss things, sometimes things get by you.

So, after all the edits are made, the presses roll, the bookseller shelves are stocked (virtually or otherwise), you come across a little something you wish you'd been able to include. Such is the case with my book, Red Lands Outlaw, the Ballad of Henry Starr.

A friend of mine, Bill Woodard, a retired engineer at Phillips Petroleum and fellow Oklahoma history buff (check out an earlier post here: Frank Phillips--Cow Thieves and Outlaws Reunion), came across an obscure little piece about Henry Starr. It literally fell into his lap while he was doing some research on Western artist Joe De Yong, who grew up in Oklahoma and was a protege of Charles M. Russell.

Woodard was born in Dewey, Oklahoma, the small town neighbor of Bartlesville, where Phillips Petroleum was founded. Dewey holds a lot of western heritage (see Tom Mix Museum), and is the burial place of Henry Starr. So during his research on De Yong, Bill opened a book about Russell from his grandfather's library, and an old yellowed newspaper clipping fell out. It appears to be a column relating a pre-statehood vignette from one of Bartlesville's founders, a merchant named George Keeler, and his encounter with the outlaw Starr. I don't have the date of the column, nor the source. Bill figured it was most likely from the Bartlesville Examiner-Enterprise printed sometime in the late 1940's or
early '50's. With apologies to the author/publisher, here's the content:


In the early days, well before statehood, when there were only four or five businesses here [Bartlesville], no streets or sidewalks, no rural  highways and no banks, the business men would take their money to Caney, Kansas to bank [a distance of about 20 miles].

The story goes that one time Keeler had assembled some cash and was beginning to feel quite nervous. In those days this locality was the headquarters for a lot of bandits, among them the famous Henry Starr.

Keeler decided that he would saddle up and take off for Caney with the bank roll, for it began to look like that was the less desperate chance to take. As Keeler would tell it, he started up the trail toward Caney, hoping he would be lucky and not meet up with some of the bad boys and get relieved of the cash.

He had traveled about a fourth of the distance when he saw a man on horseback coming down the trail toward him, only a short distance away.

“When I got a little closer,” Keeler would relate, “I saw that it was the one whom I most feared to meet – Henry Starr himself.

“It was too late to run, for Starr always had one of the fastest mounts in the country, and he would be sure to overhaul me and take my money.

“So I put the spurs to my horse and came up to him plenty fast and said, ‘Henry, I sure am glad to see you. I thought for a moment it was someone who might rob me. Now I would like to get you to ride along and guard me up to Caney so that I can put this sack of money in the bank.’

“And, do you know, Starr took me up on the proposition and rode guard over me all the way to Caney. And I got every cent of the money in the bank."


I wish I could've used this story in my novel because it perfectly illustrates the picture I wanted to paint of Henry Starr - he was sure enough a thief and an outlaw, but he was no scoundrel. 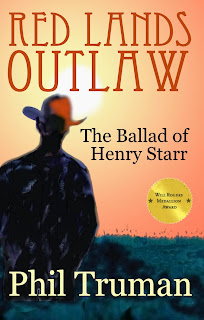 You can read more about the life and times of Henry Starr in Phil Truman's award-winning novel,  Red Lands Outlaw, the Ballad of Henry Starr. Other novels by Truman include GAME, an American Novel, a sports inspirational about small town schoolboy football, and Legends of Tsalagee, a mystery/adventure in a small town. His western short story “Last Will for an Outlaw” appears in LaFrontera Publishing’s anthology, Dead or Alive, released June 2013.