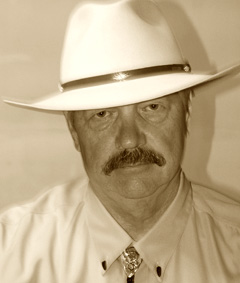 Cheryl asked me if I was willing to do a blog on my favorite western novel. Being a dunce, I signed up, and now I’ve got to come through with the goods.

Favorite western novel, wondered I. Do I drift back in time and pick Owen Wister? Or just back a few years to Elmer Kelton or Clair Huffaker or Gordon Sherriffs? Or maybe go contemporary with Richard Wheeler or Johnny Boggs?

Those authors have all written damn good Western novels. As have a bunch more, many of them members of Western Fictioneers. But folks, there’s one classic (my definition) out there that was written by our own president, the good professor Troy Smith. The novel of which I speak (must approach this with syntax that will pass the professor’s judgment) is Bound for the Promise-Land, which won a Spur Award in 2001 (wouldn’t matter to me if it hadn’t, but it’s gratifying to see that others can recognize the value and worth of this excellent story.

Troy—Professor Smith—tells the story through the first person POV of a slave (when the story opens) named Alfred, no last name. 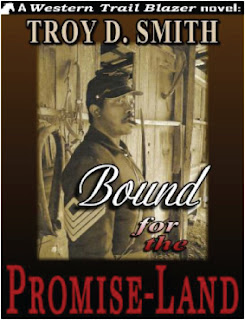 Alfred’s Daddy was a blacksmith, the son of a man from Africa. Alfred says, “…I remember how he stared at the birds. He would pause in his labors to watch them wheel up there among the clouds, a faraway look on his face. Though he looked peaceful then, he was really a hot-tempered man. He had done been sold three times when he came to the Moss place and took up with my mama. He had tried to run away from every master that bought him.
“One day, when I was eight years old, Daddy was leaning on his anvil and watching them birds. The overseer happened to come by, and gave him a good cussing for not working hard enough. He fetched him a lick with the little quirt he always carried around.
“Quick as you could tell about it, Daddy took that big old hammer and stove the overseer's brains in. The poor man fell back moaning and dying in the dust, the thick blood spreading from under his head, his fat fingers twitching that quirt a little like, without any brains to guide them, that's all they knowed how to do.
“Daddy put those rough hands briefly on my shoulders.
‘Goodbye, son,’ he said, and took off running. It was actually more of a jog – he seemed to be in no hurry, as if the act of running was just a necessary rule that had to be carried out.
“They caught him and hanged him, right in town. . . .”

Alfred’s life as we know it began with violence, with a man who craved the freedom to fly like a bird and a overseer who figured he could quirt any black man alive with impunity. Alfred saw a black man kill a white one, and saw the black man die.

Alfred and his Mama and his little brother Roby took to life without Daddy. “We had a sister once,” says Alfred. “Jenny, four years younger than me and cute and sassy as a button. Doctor Moss give her to his nephew in Virginia one year, as a Christmas present. I never seen her again.” So Alfred knows he and Mamma and Roby and Jenny are nothing more than property to be given away or sold or hung, whatever the white master says. 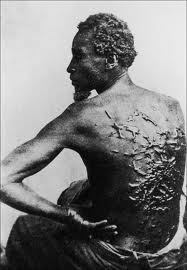 And he learned more about his situation. He saw his own mother whipped. “I forget what it was for,” Alfred says, “but it couldn’t have been much, ‘cause mama always walked around white folks like she was walking on eggs.”
“The whip bit into her back,” he says. “It broke apart her flesh, including many old scars—even our scars was not our own, they could be broken apart and added to and changed at the whim of the overseer.”

So Alfred learned something important. “It usually wasn’t our masters who mistreated us so, it was the overseers and the pattyrollers—that is the road patrollers. Unlike the masters, them people could not afford a single slave and probably never would. While slave-owners lived in luxury, rednecks ate dirt—many of them ate and lived less comfortably than slaves. The only way they could strike out at the high classes was through their property. Which was us.”

Alfred got a girlfriend named Frankie and his hankering to be with her finally got him caught out at night, and whipped good. Then he had to stand by while pattyrollers beat a friend to death. Alfred said of the beaten and dismembered dead man, “He free.”

Then Frankie had a yellow baby. Her reasoning, “What was I supposed to do, Alfred? We is their property, dey own us. We gots to do whatever dey say." And in the spring, she had another, a little boy they named Billy.

The war started, the war with the Yankees, and the young men of the plantations, the white ones, they took off to spend a month whipping Yankees. That’s how long it’d take them, they said. But when they came home, it was with a missing arm or leg. Then one of the master’s sons came home the back way, sneaking. And word gets out that Yankees are recruiting slaves to become freed men in their army. Alfred decides to cross the river and join the Yankees. 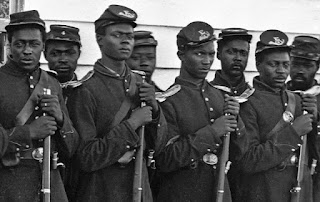 A man with a drooping mustache, who seemed to be their leader, knelt beside me.
"When daylight comes," he said – and it was only an hour or so away – "we'll send you back behind the lines to be relocated."
"I didn't come here to get relocated, suh. I come here to fight."
The man smiled. The smile was grim in the faint light. "Well," he said. "I'm sure we can arrange for that, too."
And they did.

I thought we all stood a little straighter after we signed up; that was nothing compared to how we carried ourselves during drills the day we got outfitted. We did our turns and marches stiff and crisp, with professional pride, and that attitude stayed with us for the whole day – even after we was done and in our tents. All that day, and every day after.
We was men now, not just farm animals. We walked like men. This feeling grew even stronger when we got to shoot our guns in our new uniforms. We had been having a hard time learning about guns before then, and it was causing our regiment to fall behind where it ought to be. When the U.S. Army planned out how to train new recruits, they took for granted that their men was already familiar with firearms. And white men was – even the men from up North.

Alfred became a corporal. Still, joining the Union army didn’t get Alfred nor any other blacks equal rights. White men thought blacks had no concept of morals, that they were animals—like this:

…everybody knows, they complained, that darkies have no morals. No sense of right and wrong. At least where it concerned lust – we was all just a bunch of rutting animals in their eyes. It was unfair that they not be allowed to join in, and it was unfair that we should complain when they tried. They "wasn't really hurting anything".
As for me, I knowed – like every man in my regiment knowed – that if I was to place my hand on a white woman's bosom, or even talk crude near her, I would be locked up or even dead before morning.

Alfred went to war, and there he and other black soldiers gained pride. And some died. But they decided why they were fighting—because it was right.

Then he helped a young Reb escape. Or at least have a chance to escape. He said, “I remember my frustrated disbelief when Uncle Wiley had risked his life to help Phillip Moss. I perceived it then as a weakness. Now I was not so sure. I had spilled blood on this day, had killed men – some was probably slavers, others rednecks who owned neither slaves nor other property. And I had saved one at random, because he reminded me of someone I knowed. If he had been a little fatter, or a little older, I would almost surely have cut his throat.
“I did not feel that this action made me weak, or that my other actions made me strong.
“All I felt was human, and alive.”

As the war ended, Alfred could see some important things about himself and his black comrades.

Petersburg stood for eight more months, until the last week of the war. We stayed on hand to have meaningless skirmishes with the Rebs inside every week or two. Colonel Wentworth came back after Christmas to lead us, even though we wasn't actually going anywhere – and that was good, because the colonel could never have kept up with only one leg.
Nobody wrote any newspaper articles about the Fourth South Carolina Volunteer Colored Infantry, and they never sung any songs in our honor.
But we knowed, and the white men who fought beside us knowed, that we fought to free ourselves harder than anybody fought to free us. We was not animals, wild or tame – we was men.
We was men.

The black soldiers had to stay a year after the war was over because they’d signed for three year stints, and one year of their enlistment remained. Glorified guard duty, Alfred called it. But when he got out and went back to his “wife” Frankie, she’d taken the yellow children and gone off with another man. Being free had its downside. 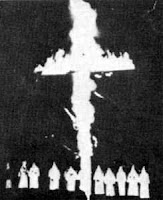 Now, I’ve only taken you about halfway through this epic novel. Alfred tries civilian life, but has a run-in with the Ku Klux Klan and decides to move north. What did he find?

I walked back down the road, headed for home. I should've knowed better. A colored man leaves his job and don't stop walking or lift his eyes up until he reaches the nigger slums. New York was no different from South Carolina. North was no different than South.
My skin was just as black either place.

Alfred went looking for Frankie again, and found her. She told him to take a leap, she had another man and two more kids. Alfred joined the 10th Cavalry at the age of 29, once more a soldier in the U.S. Army. 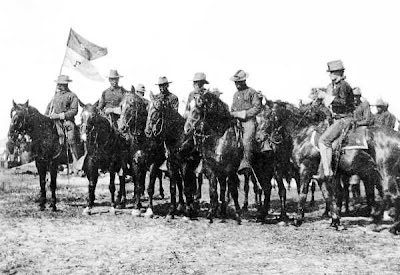 I’ll leave you now, with the conclusion Alfred came to in the end.

Freedom is not a place you run to. It's something no one can give to you, and no one can take away – unless you give it to them. I thought back on all the folks I have knowed in my life. Some of them was really free, and some of them was not.
Freedom is a place in your soul. It is a voice whispering in your dreams, telling you who you are. It is the dignity and pride of being a human man or woman. It belongs to us all.
I look up at the birds in the sky, as I have always done, as my father done before me, and I know the truth.
Freedom.
Freedom is the Promise-Land.

Posted by ChuckTyrell at 7:41 AM