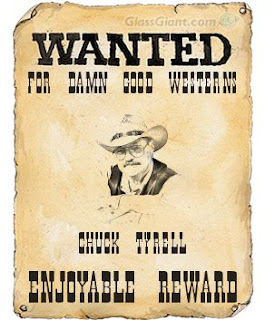 I like Huffaker’s books. Cowboy. The Cowboy and the Cossack. War Wagon. Guns of Rio Concho. And in place of Posse from Hell, I’ve chosen Seven Ways from Sundown.

That’s the full name of a nine-day-old Texas Ranger—Seven Days From Sundown, tacked in front of a common last name: Smith. Usually, he went by Seven Smith.

Word comes that Jim Flood’s busted out of Yuma Prison, something that’s not happened before.

Well, Lieutenant Herly’s got his eye on a girl named Joy, but she’s got her eye on Seven. So what does the looie do? He sends Sergeant Hennessey and Seven Smith after Jim Flood.

The sergeant spends a bit of time to see if he can “make a gunfighter” out of Seven Smith.

Once they’re on the trail, we start to find out what kind of man Jim Flood is. Listen to this.

“You hear tell, lately, of a man around here named Jim Flood?”

The old woman came out of the door and stood on the second of two rickety steps leading up from the ground. “Why sure, mister. He was here not more’n a week ago or so. He had beans and coffee with my man and me.” She stopped with sudden suspicion. “And what might you be wanting with ‘im?”

“Just trying to find ‘im is all. Are you real sure it was Flood who was here, ma’am?”

“Sure?” The woman’s voice sang with resentment and she fumbled in the pocket of her faded blue apron. “Lookit here, mister! A ten-dollar gold piece!” She raised the gleaming coin. “No common saddlebum never gave no poor hard-workin’ old woman a present like that for coffee and beans. It was that fine Mr. Flood, never doubt. He was just passin’ through on his way up north.”

“What kind of horse was he ridin’, ma’am?”
“A big handsome paint. I tell you—he cut the finest figure of a man!”

Hennessey nodded. “Flood’s partial to paints.” He asked the woman, “Never said any special place up north he was headin’?”

“Rangers? Well you won’t get nothin’ outta me! Pesterin’ a body half to death with fool questions!” She went back in and slammed the door.

Seven turned back for one last look at the shack and saw the old woman peering out after them through a cracked window. “She sure didn’t care for the Rangers.”

“Everybody does. ‘Till he kills ‘em.”

Aha. A wicked man that everyone likes. Until he kills them. Now that’s something us writers should prick our ears up at. I mean, baddies are supposed to be wicked and ruthless and money-hungry and psychos. But everybody likes Jim Flood.

Then Flood kills Hennessey and Seven catches Flood. He decides to take the outlaw back to Texas so they can “hang him.”

Texas is a long way from Utah.

Now, let’s listen to Flood talk about himself.

“Anyway, nothin’ happened to me except about a thousand little things that rubbed me the wrong way. Seemed like for every decent person I bumped into, there was a hundred towns full of cheap crooks, liars, braggarts, and bullies. And then one day the greatest idea I ever had come to me.”

Seven finished his coffee and put the cup down on the floor. “What?”

“To do exactly what I wanted for the rest of my life. We only get one apiece, you know.” Flood smiled at the fire. “I decided never to give a damn about what other people thought, or to give a damn about the law or anything else. If I wanted to raise hell, take some money, have a woman, kill a man—why, I’d just god-damn well right do it. Or if I want to help people, I’ll do it, though I find that don’t happen so often as the other things.”

Flood told Seven that he could take him any time he wanted, but wouldn’t because Hennessey had saved his life in the past, and Seven had been decent to Flood, even though he killed Hennessey. And so they go back to Texas, a kind of truce between them, and more than once, Flood gets them out of a tight place, and he keeps his word to Seven that he won’t take advantage of him.

Seven thought on that. Then he said, “I don’t think so. If I’d really thought that, I doubt I coulda brought him in.”

Three days later Flood broke out. He shot the lieutenant who’d made captain, and Seven’s girl Joy got caught in the crossfire, not bad, but hit.

Flood knew he hit the girl, and he came back to see Seven.

Seven was on his way back to the door when the horse came to a halt in front of the building. Flood’s voice called out softly, “You there, Seven?”

“Yeah, I’m here.” Seven went out onto the dark ground beyond the door and could see Flood’s dim figure leaning toward him from where he sat his horse a few feet away.

“Heard the girl got hit. It was dark in the barn. I just shot at a sound I heard.”

“Flood! I want you to know something.” Seven’s voice caught slightly with feeling, then continued firm as the man on horseback hesitated. “I want you to know that I think considerable of you, and think that you are about the best man I’ll ever know.” 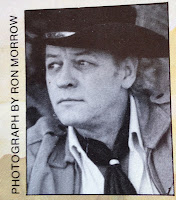 Seven shotguns Flood in the end, and the end is worth reading the whole book. Jim Flood is a bad man you can like, and you, as a reader, are satisfied that he cannot be allowed to live. Problem with Flood was, he just didn’t give a damn . . . well, almost.