We've had some interesting and outstanding movies featured here at the Western Fictioneers' Saturday Matinee — dramatic, violent, angst-filled westerns. The hero seeks justice and upholds the code of the west despite all odds. Most of these pictures rank in my favorites, too. But there's room for everything, and we can't watch the same type of film all the time. Right?

When I need a pick-me-up, there's a western movie that will do it every time. It's ... 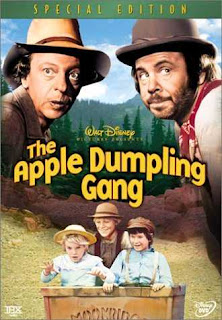 It’s a film adaptation of a book of the same title written by the esteemed writing teacher, Jack Bickham, who also wrote a writing craft book still in use today (and on my bookshelf) Elements of Fiction Writing - Scene & Structure. Bickham was a student of Dwight Swain, who wrote Techniques of the Selling Writer, also on my bookshelf.

The lead characters are a strong heroine, Magnolia "Dusty" Clydesdale played by Susan Clark, and Bill Bixby as Russell Donovan, a gambler with an inconvenient compassionate streak. Bixby and Clark were excellent in this film, but the glory goes to Harry Morgan who played Sheriff (also Quake City’s judge and barber) Homer McCoy, and two outlaws, Theodore and Amos played by Don Knotts and Tim Conway. This film has another outstanding villain, too—Frank Stillwell played by Slim Pickens.

Right from the get-go, we’re introduced to the ineptness of the Hash Knife Outfit, Theodore and Amos. Then we go to the saloon for a lucrative game of poker. As Donovan says, “Well, there's one good thing about luck—it always changes. And I got a feeling mine is just around the corner.”

Gambler Russell Donovan makes a deal to pick up "valuables" in exchange for a poker stake, then tries to renege when he discovers that the precious cargo is actually three children. He argues with the stage driver, Dusty Clydesdale, who happens to be a woman dressed in men’s clothes. She doesn’t relent, and Homer McCoy’s on her side, too:

Donovan, this is just a half portion of a town, but we do have certain what you might call rules to live by. You don't jump another man's claim; you don't steal his wife, woman or whiskey; you don't strike a bargain and then entertain second thoughts about the matter. Any one of these offenses could make you the exalted guest of honor at a hemp party.


So now Donovan has three children on his hands. He’s directed to a grimy, leaky shack, where he does his best to settle the kids. He makes a mess of supper and the cabin’s filled with smoke when Dusty arrives with a bucket of sonuvagun stew. She puts out the fire, gets the place under control, and after Donovan turns on the charm to get her to take the children, leaves, completely unswayed. The romance subplot has begun.

As in many westerns, gold plays an important part of the story. The children’s father has a mine, and they’re determined to find the gold that their pa promised was there. Donovan tells them there’s no gold but they don’t believe him. He tries to convince or coerce the townspeople to take the children but no one wants to be burdened.

The first major fiasco happens when the kids find an ore cart. They end up taking a wild ride down the mountain and through the Chinese section of town, upsetting the water tank and making a mess of the laundry, and playing havoc in the town proper. Donovan walks out of the saloon counting the money he’s won and the townspeople take it to pay expenses. So now Donovan is still broke and still has three children he doesn’t want.

Of course, the kids do find a huge gold nugget and now all those townspeople who didn’t want the children before want them now. Donovan is still trying to pawn them off on Dusty, and she’s still not buying. Donovan won’t turn them over to just anyone, and the sheriff tries to convince him to marry Dusty to protect the kids. “Dusty's a fine specimen of womanhood! I seen her get caught in a cloudburst once, and I wanna to tell you!”

And no western is complete without a bank robbery. Both the Hash Knife Outfit and the Frank Stillwell and his gang are after the gold. Stillwell isn’t too happy with Amos because Amos shot him in the knee and now he has to wear a brace. “If I ever get within shootin' distance of that doggone Amos Tucker, he's gonna have winders where his ears was.”

Here’s Theodore and Amos as they’re planning to rob the bank.

Don't work up a toot about historical accuracy because there is none in this film.  Gold, gambling, a bank heist, a saloon brawl, and a ladder scene like no other — that's what you'll get.  So grab some popcorn and a cold one.  It's time to for a belly laugh!
May your saddle never slip.