Perhaps the most pivotal battle in American military history is the Battle of Gettysburg. It defined the outcome of the War. Its effects have resonated throughout history and are felt even today.

The first notable reenactment also took place at Gettysburg and the participants were War Veterans. The Great Reunion of 1913 marked the 50th Anniversary of the battle and more than 50,000 Union and Confederate veterans participated.

The Chief Surgeon of the event was quoted as saying that, "Never before in the world's history had so great a number of men advanced in years been assembled under field conditions." Most of the men were in their seventies and eighties, and some were more than 100 years old. 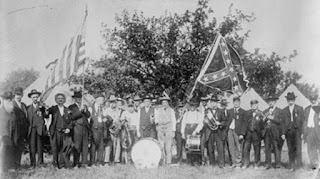 It was not an actual battle reenactment like the modern reenactments we have today. Instead, the Confederate Veterans walked the path of Pickett's charge and were greeted with handshakes by the Union Veterans.

“These venerable men crowding here to this famous field have set us a great example of devotion and utter sacrifice. They were willing to die that the people might live. But their task is done. Their day is turned into evening," Wilson said. "They look to us to perfect what they established. Their work is handed to us, to be done in another way but not in another spirit. Our day is not over; it is upon us in full tide."

Modern civil war reenacting is believed to have begun during the Centennial Commemoration activities that lasted from 1961 – 1965 and has evolved over the years into what it is today.

Regardless of the fun and enjoyment we have at the reenactments, the primary reason that we do what we do is to honor those men, our ancestors, who fought and died and suffered for their beliefs, regardless of the side they fought on.

This year marks the 150th Anniversary of the Battle of Gettysburg.

Matthew Pizzolato's short stories have been published online and in print. He writes Western fiction featuring his antihero character, Wesley Quaid, that can be found in his story collection, The Wanted Man and the novella Outlaw.


Matthew is the editor and webmaster of The Western Online, a magazine dedicated to everything Western and can be contacted via his personal website or on Twitter @mattpizzolato.