Both books reviewed for this edition are Peacemaker Award nominees in the 2013 Best Western Novel category. 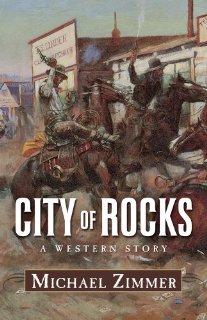 Joseph Roper was barely 17 when Ian McCandles and his gang of cutthroats rode into Coalville, Idaho, in November 1879. A few hours later, part of the town and Roper’s childhood lie in ruins. While the rest of Coalville’s citizens cower in fear, the untested boy sets out alone and only marginally armed to rescue a kidnapped prostitute and bring the sheriff’s killers to justice.

Decades later, nearing the end of his days and haunted by a legend he never intended to incite, Roper uses a series of interviews with the Works Progress Administration’s Folklore Project to set the record straight. He wasn’t a hero, he maintains — just a naïve cowpuncher flush with the reckless passion of youth. Looking back with insight gained from time and distance, he’s amazed he survived.

Fast-paced, compelling throughout, and emotionally savage in spots, City of Rocks spins a Homerian epic in the first person. Gritty, violent, and intensely personal, the book wrenches readers through a coming-of-age story that leaves even casual bystanders immutably changed at the end.

Author Michael Zimmer’s evocative prose envelops the tale like the frigid winter blankets the Idaho mountains, jerking readers out of the experience only in the spots where profanity is cropped (“h___,” for example). In a frontnote, Zimmer writes that City of Rocks is based on actual Folklore Project transcripts, which may explain the elisions but hardly seems necessary in a modern novel. In the main, though, the author’s use of newspaper clippings and asides from the narrator to begin many chapters is wholly engrossing, both adding to and temporarily rescuing readers from the nearly non-stop tension. 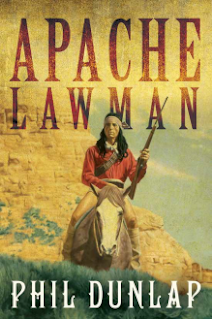 A murderous prison break, a sheriff kidnapped on the eve of a local election, a stand-in deputy who clearly is not who he claims to be, a marriage-minded army belle, and racial mistrust combine to give U.S. Deputy Marshal Piedmont Kelly a weeks-long headache in Phil Dunlap’s Apache Lawman.

At the same time Kelly is uncovering machinations that tie a ruthless outlaw gang to the army and a large payroll shipment, he’s also fending off unwanted attention from a colonel’s head-in-the-clouds daughter while romancing a down-to-earth café owner. On top of that, when Kelly defiantly hands a badge to “the enemy” — an aging Apache who once saved Kelly’s life — he puts both of them at odds with every bigot in the territory.

Readers probably will figure out the mystery well before Kelly puts all the pieces together, but that doesn’t compromise the fun of watching the marshal dangle at the end of several strings. Unlike Kelly, readers are privy to the thoughts of almost every character in the book: Kelly, the sheriff, both women, the titular Apache lawman, and most members of the outlaw gang (both overt and covert). A very traditional western, Apache Lawman is liberally sprinkled with humor and just enough misdirection to keep readers moving until the good are rewarded and the bad get their just desserts.


Kathleen Rice Adams is a Texan, a voracious reader, a professional journalist, and a novelist in training. She received review copies of both books in this post from the author or publisher. Her opinions are her own and are neither endorsed nor necessarily supported by Western Fictioneers or individual members of the organization.
﻿
Posted by Unknown at 11:17 AM