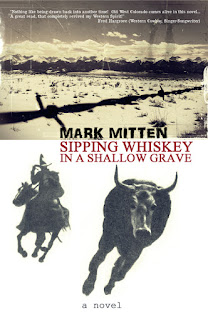 As the brutal winter of 1887 descends upon Colorado’s high country, cowhands, miners, townsfolk, lawmen, and even outlaws go about their daily routine, never suspecting their disparate lives are about to intersect in a freakish, though inevitable, series of events that will change them all forever. Metaphorically speaking, no one escapes this tale alive.

Mark Mitten’s debut novel is not for the squeamish or the faint of heart. The landscape is harsh; some of the people even harsher. From the outset, Mitten pulls no punches in depicting death, destruction, and a hollowness of the soul that is difficult to confront. Perhaps that’s the essence of the book, though: By forcing readers up close with both the innocent and the twisted, he forces them to consider the dichotomies inherent in being human.

Sipping Whiskey in a Shallow Grave, nominated for the 2013 Best Western First Novel Peacemaker Award, is not an easy, recreational read. That is a warning, not criticism. Mitten’s voice is distinctive; his characterizations are fresh, engaging, and genuine. Dialogue and actions resonate with authenticity. The cast list is extensive, though, and the novel’s uncommon format frequently leaps between locations, subplots, and character subsets without a hint of segue. Everything ties together in the end, but keeping track of the various threads and players may be a bigger challenge than casual readers feel comfortable undertaking. This book requires a commitment — not that commitment is a bad thing.

Ultimately, Sipping Whiskey is a story of perseverance and survival; of redemption and damnation. As his style matures, Mitten will be an author to watch … if only to ensure one of his characters doesn't sneak up behind you with a weapon.


Kathleen Rice Adams is a Texan, a voracious reader, a professional journalist, and a novelist in training. She received a review copy of Sipping Whiskey in a Shallow Grave from the publisher. Her opinions are her own and are neither endorsed nor necessarily supported by Western Fictioneers or individual members of the organization.
Posted by Unknown at 1:00 AM