A Justice Denied by Tom Rizzo

A SHADOW OF EVIL fell across a peaceful Indian village in southeastern Colorado on a cold November morning in 1864. At dawn, 700 members of the Colorado militia, under the command of Army Col. John Chivington, swept through a place called Sand Creek, committing wholesale slaughter.

The Sand Creek Massacre, November 29, 1864, claimed the lives of an estimated 163 Cheyenne and Arapaho Indians , many of them scalped, disemboweled, and mutilated--women and children among the victims.

Some troops even displayed bloodied Indian body parts as trophies on their weapons, hats, and other gear and also exhibited them in public at a theater in Denver.

After nearly a century-and-a-half, the search for justice continues.

Public outcry was intense and bitter, and still echoes across the pages of history.

After the horrific attack became public knowledge, the US government not only acknowledged it as a senseless tragedy, it promised survivors

and relatives of victims reparations of land and cash in the 1865 Treaty of the Little Arkansas. The promise, however, went unfulfilled.

This past December, descendants of the Sand Creek Massacre gathered in Anadarko, Oklahoma, which calls itself "Indian Capital of the Nation," to hear a progress report.

A legal team for the Sand Creek Massacre Descendants Trust said recent discussions with officials at the Interior Department could pave the way for a federal lawsuit. About 15,000 descendants have been identified.

In 1862, he won praise for his actions at the Battle of Glorieta Pass, in the New Mexico Territory, against a Confederate supply train. Chivington’s soldiers forced the Confederates to withdraw into Arizona, and then Texas.

The massacre ignited a firestorm of controversy and outrage.

Two of Chivington’s own officers – Captain Silas Soule, and Lieutenant Joseph Cramer, commanders of companies D and K – had refused to follow the colonel’s orders and ordered their troops to hold fire.

Furthermore, on the previous day, Black Kettle, the local chief, had received assurances from the US Army that his people would be protected at Sand Creek; the government promised the territory to the Cheyenne in an 1851 treaty. But it was an empty promise, like so many others.

Chivington took pride in his victorious raid, even to the point of total disregard for reality. 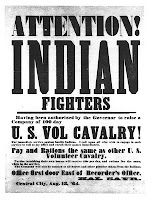 The reports were blatant hogwash. Most of the men had left the village to hunt buffalo before the attack occurred.

In one of his reports, Chivington included a passage condemning the conduct of Captain Soule: "he saying that he thanked God he killed no Indians, and like expressions, proving him more in sympathy with the Indians than the whites."

"Damn any man who sympathizes with Indians! … I have come to kill Indians, and believe it is right and honorable to use any means under God’s heaven to kill Indians."

The Joint Committee on the Conduct of the War concluded that Chivington  ". . . surprised and murdered, in cold blood, the unsuspecting men, women, and children on Sand creek, who had every reason to believe they were under the protection" of US authority.

The committee recommended that immediate action be taken to remove from office "those who have thus disgraced the government" and punish them for "these brutal and cowardly acts."
The recommendation was ignored, and no one was charged, despite the damning evidence.
Under pressure, Chivington resigned from the Colorado Militia.

After the war, Chivington failed as a freight hauler in Nebraska, and lived for a while in California before returning his native Ohio to farm.

In 1883, while serving as editor of a local newspaper, he campaigned for a seat in the Ohio Legislature, but withdrew from the race when his opponents focused attention on the butcher of Sand Creek.

He returned to Denver to work as a deputy sheriff, and died from cancer in 1894.

Political culpability for this tragedy fell to Governor John Evans of the Territory of Colorado.

At the same time, he concluded, Indians represented an obstacle to the routing of the transcontinental railroad through Colorado, one of the defining elements of the state's economy.

Evans' investment in railroads early in his career as a physician not only brought him wealth, it resulted in political influence. Although his friendship with President Lincoln won him the appointment as Territorial Governor, he lost it because of the savagery at Sand Creek.