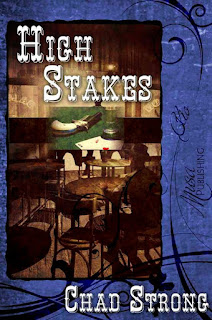 What’s a professional gambler to do when the new preacher's wife forms a high-handed morality committee to run all the brothels, saloons, and gambling dens out of town? Fight back by infiltrating the preacher's family and compromising the reputation of his innocent daughter, that’s what. But deceit carries a tremendous price…especially when both sides of the cat-and-mouse game are running their own covert ops.

Chad Strong’s High Stakes, nominated for the 2013 Best Western First Novel Peacemaker Award, stands out among the nominees for two reasons: It’s set in a town, and that town is in Canada — Victoria, British Columbia, to be exact.

The author does a number of things well in his debut novel. Characterization is his strong suit, along with an ability to incorporate mountains of detail without annoying readers or slowing the story’s pace to a crawl. A few anachronisms in exposition and dialogue (“uptight,” an Americanism dating to the 1960s, for example) may jangle some readers, but overall Strong does an excellent job of capturing a time (1877), place, and society largely overlooked in the western genre.

The author also blends elements from several subgenres extremely well. Strong language and marginally explicit sexual content prevent an “inspirational” label, though much of the story focuses on the preacher’s earnest attempts to turn the protagonist away from a life of sin. The interactions between the two characters skirt the edge of proselytizing, but not closely enough to annoy readers who avoid the inspirational category. The novel meets all the qualifications to bear the label “western historical romance” quite well, but romance traditionalists may object to the love triangle that forms the fulcrum of the plot, since a certain amount of bed-hopping is involved. (Men, by the way, can read this one without endangering their man cards. Did I mention the gunfights, knife fights, and fistfights?)

Even at 230 pages, High Stakes is a quick read. And it’s fun. The ending, balanced on a thin line between expectation and surprise, shines.


Kathleen Rice Adams is a Texan, a voracious reader, a professional journalist, and a novelist in training. She received a review copy of High Stakes from the author. Her opinions are her own and are neither endorsed nor necessarily supported by Western Fictioneers or individual members of the organization.