Ranger Jim’s Ramblings for May

First, I want to apologize for going AWOL last month. I’d like to say Yankee and I were out on a long search and rescue mission with the horse Patrol. I’d like to say that, but the truth is the second Thursday of April snuck up and got by me before I even realized it. 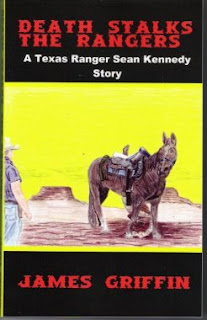 I’m going to start off this month, as usual, with a quiz. First person who comes up with the correct answer will win a signed copy of my Jim Blawcyzk novel Death Stalks the Rangers.

We all, or most of us, know that to cowboys in the frontier West coffee meant Arbuckle’s. My question is what was packed in every container of Arbuckle’s which had cowboys on a trail drive clamoring to be first to answer Cookie’s call “Who wants to grind the coffee?”

Now, let’s mosey on to more horse factoids. I’m going to pass along some nuggets that will help anyone who writes Westerns be more accurate in their horse descriptions. A lot of little things that can make a difference. Those of you who have read my books know that the horses are every much characters as the human protagonists in my stories. A lot of writers don’t recognize that, but a man on horseback for days or weeks at a time forged a strong bond with his horse. Both human and equine depended on each other, in many cases for survival itself. A western where the horses aren’t part of the story is just missing something. 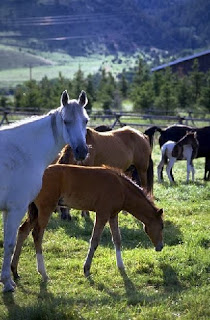 We’ll start with horse colors. There are lots of variations of horse colors, but the basic ones are black, bay, chestnut, gray, and white. Even today, debate still goes on about whether there are true black horses, or just very dark bays, and true white horses. (Not counting albinos, which usually don’t survive). I tend to believe there are true blacks. Then we have duns and buckskins, palominos, grullas, roans, and all manner of color terms.

Chestnuts are reddish-brown horses with red points, and red or flaxen mane and tail.

It can be difficult on occasion to tell a bay from a chestnut. Always keep in mind the points- legs and ears - and the mane and tail. A bay will have black points, mane and tail, a chestnut red or flaxen.

A sorrel is a variety of chestnut, usually more reddish. The term sorrel is more commonly used for Western horses than European.

Palominos are golden-colored horses, with light or white manes and tails.

Duns and buckskins look very similar, but a buckskin tends to have a more uniform color. Grullas are mouse-colored.

A gray is, of course, gray. Gray is the color which most often appears as “dapple”, or spotted.

Paints and pintos, terms which were used interchangeably in the west, are horses splotched with white. They were sometimes called “calico”.

Piebald and skewbald were terms used to distinguish paint colors, although not used commonly in the West. They are pretty much in disuse today, although still used in Europe. A piebald is a black and white paint. A skewbald is a paint of any color but black.

And of course Appaloosas have their own distinct spotting patterns, which I discussed last time.

If a horse has a diamond shaped mark on its forehead, that’s a star. A diamond shaped marking with a narrow strip going downward from the star is a star and strip. A short white, narrow mark on the muzzle is a snip. So, a horse can have a star, strip, and snip. (Yankee does).

A broad white mark down the face is a blaze. A horse whose blaze goes over both cheeks so that almost the entire face is white is called a bald-faced horse.

Enough about horse colors. Entire books have been written about them. Time for some other tidbits.

When a horse drinks, he doesn’t lap up water like a dog or cat. He sucks it in, much like a person sipping soda through a straw. Never describe a horse lapping up water. It doesn’t happen.

Horses also can’t pant, which I have seen written. Horses cannot breath through their mouths, only their nostrils, so it is physically impossible for a horse to pant. They can and do breath heavily, but they don’t pant.

Most of a horse’s head consists of nasal passages. A horse can have a hole shot through its long nasal passages, or one caused by injury, and still be able to breath.

Horses also cannot vomit. Their neck, throat, and esophageal muscles are too strong to let food come back up. That’s the reason colic is so dangerous, usually life-threatening, for a horse. It a horse gets a bowel obstruction, and can’t pass manure, if the condition isn’t treated quickly the horse’s intestines or stomach could twist, which is always fatal. The gas buildup from colic is extremely painful, and can cause the stomach or intestines to literally explode. In the old West, there was little to be done for colic, except for trying to walk the horse until the gut starts moving again. That’s still done today, until the vet arrives.

A horse who twists a shoe, but where the shoe doesn’t come off, will usually not want to step on the bent shoe at all, making him appear extremely lame. Once the bent shoe is removed, the horse will walk just fine, allowing for the unevenness of one shod foot and one not.

“Biscuit-eater” and “pie-biter” were terms cowboys used to describe horses spoiled by their owners, and which hung around camp begging for treats.

There were and are one-man horses, although they are extremely rare.

Most working cowboys didn’t own horses. They were assigned a string of mounts by the ranch which employed them. And, just like humans, some horses were specialists… some were roping horses, others cutters, and still other loved to “pop brush”, that is, chase out cows hiding in the thorny vegetation of the southwest.

And it is true that a lot of cowboys didn’t like paints or pintos, often referring to them disdainfully as “Indian ponies”. However, quite a few cowboys and Texas Rangers did favor pintos.

Finally, unlike today, there were no official “breeds” of horses. The various Western horse breed registries, such as American Quarter Horse, Pinto Horse Association, American Paint Horse, Appaloosa, and so on weren’t even established until the mid-1900s. So, when writing about a specific type of horse in a Western, you can write quarter horse, pinto, mustang, and so forth, but only as a type. Never capitalize Quarter Horse, Paint, Appaloosa, etc., as none of these animals existed as distinctive breeds in the old West era.

I hope I’ve provided at least a bit of useful information. Next time up, more Texas Ranger lore. How many bullets could a man take and survive in frontier Texas? One Ranger took eighteen while trying to stop a riot. Even more amazingly, he survived, stopped the riot and arrested several of the participants, then died… many years later, in bed, of old age.

Jim Griffin
Posted by Livia J Washburn at 1:00 AM