A Writer and Her Dogs by Livia J. Washburn 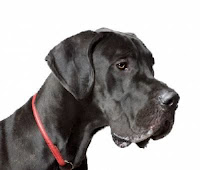 For most of my life, I've had dogs. The times when I didn't have been few and far between. And for the most part, the dogs I've shared my life with have been pretty smart. Buster Brown, a little brown dog (hence the name) would get a mouthful of food from his bowl, take it back to his bed, and drop it there so he could lie down and eat at his leisure. Bob (who despite the name was a girl) was smart enough to have two families feeding her for years without either being aware of the other. Cheyenne, a Great Dane who knew in her heart that she was really a lap dog, herded our other dogs around and made them stay on the porch where it was safe. Cheyenne also would sneak into the kitchen at night and grab cookies so neatly, leaving others so we didn’t catch on for a while.  With two small children in the house, guess who got the blame for that until I caught a hangdog face full of cookies.

Not that all of our dogs were really all that bright. Bailey, our Beagle, was absolutely neurotic when it came to storms. The sight of a dark cloud in the sky, followed by even the faintest rumble of thunder, would send her into a panic. You wouldn't think an overweight Beagle could climb a chain link fence, would you? But when a storm was coming, Bailey could. I don't know where she thought she was going, but she was determined to get out anyway. Other times she decided to escape from our fenced yard and go adventuring, but she could always find her way back. Unfortunately, the other dog who was in the yard with her when she unfastened the gate latch, couldn't. 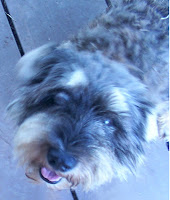 Which brings us to Clifford, a miniature Schnauzer, who would go off with Bailey and then have no idea how to get home, so we'd have to go looking for him. Clifford may not have been smart, but he made up for it by being the sweetest, friendliest dog I've ever seen. You know those pictures of dogs you see on the Internet where they're grinning? Clifford was like that all the time.

What does this have to do with writing, you ask? Well, in addition to all the affection dogs bring to our lives (and that helps keep a writer sane, let me tell you), for years now they've been my close companions when I'm working. And by close companions I mean they're literally in my lap with the laptop. For a long time, our current old-timer (he's 18) sat in my lap with the computer while I was writing. Since he's gotten older and stiffer, he prefers to be in his bed, or his homemade wheelchair when he's up trying to convince me it’s dinner time, but I also have a pair of adorable miniature pinscher/Chihuahua crosses named Nikki and Nora (after the Dashiell Hammett characters, of course) who like to curl up in my lap so that I have to set the computer over to the side and work at an angle. It's a little awkward at times, but did I mention they're adorable? When those little faces look up at you with such love, there's no way you can find it in your heart to make them move. At least I can't, anyway. (Nora's the one doing the prairie dog imitation and Nicki is on bug patrol. )

So whether it's awkward or not, I intend to keep on drawing comfort and inspiration from the close presence of my little friends. In fact, they're here right now, and judging by the looks on their faces, it's time to put the computer aside for a little while and concentrate on ear rubs. I think I can spare the time. 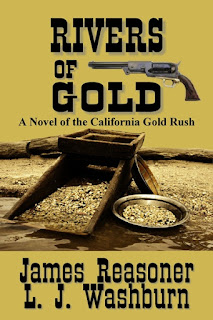 My husband James Reasoner and I recently reprinted a historical novel of ours about the California gold rush, Rivers of Gold. We have an interesting dog as one of the characters.

EXCERPT:
He woke up to the sound of angry shouting.
"Hang him!"
"String 'im up!"
"Damn thief!"
Nathan rolled over and lifted his head, blinking against the bright morning sunlight that slanted under the wagon. The outraged yelling was still going on. Using his elbows, Nathan pulled himself from under the wagon and looked toward the nearby hills, which seemed to be the source of the commotion.
He saw a group of men clustered around a spruce tree. One of them waved a coiled rope in the air and cried, "Got my dust, he did! He's been sneakin' around the camp lookin' for something to steal for days now! I say we get rid of him!"
One of the other men lifted a single-shot rifle. "I can shoot him," he offered.
The first man, the one who had evidently lost his poke to the thief, shook his head and said loudly, "Shootin's too good for him. I say we string 'im up!"
Nathan felt a shiver of apprehension go through him. During his days as an Argonaut, he had seen a few examples of the rough justice that was dispensed in the mining camps and heard stories of other times when miners' courts had been convened. Such proceedings didn't really follow any rules, and they were usually more concerned with vengeance than justice. From what he had seen and heard so far, some poor fellow was about to be hanged, and Nathan wasn't sure he wanted to wait around to witness the gruesome spectacle of a man strangling and kicking away his life at the end of a rope. He stood up quickly and began gathering his gear. The shouting from the mob grew louder and angrier as Nathan pitched his blankets into the back of the wagon. He could roll them up later, after he was away from here; and he could stop when he was well out of earshot to fix himself some breakfast.
As he reached for his gun belt and buckled it around his waist, it struck him as a little strange that he hadn't heard the accused man trying to defend himself. Of course, if the thief had said anything, the other men likely would have just shouted him down. Still, Nathan thought it odd that a man would go to his death, would allow himself to be lynched, without even trying to speak up in his own behalf.
At that moment, there was a burst of loud snarling and growling, and one of the men yelled, "Look out, he's bustin' loose!"
Involuntarily, Nathan jerked his head toward the mob. He never would have expected the sight that met his eyes. A dog had broken free of the circle of men and was running toward him with a loping, ungainly stride that still managed somehow to cover ground in a hurry. The animal was a huge, ugly brute, with shaggy brown fur and a blocky head almost as large as a horse's. Its tongue lolled from its mouth and it trailed slobber from its muzzle as it raced toward the creek and the wagon.
Nathan's eyes widened. Was the dog attacking him? He tensed, ready to vault up into the wagon bed, then he realized that wouldn't do him any good if the dog meant to maul him. A beast that large would have no trouble leaping into the wagon after him. Nathan's hand went to the butt of the gun on his hip. He might have to pull the Colt and try to shoot the dog. That thought made him so nervous he completely forgot about the things the miners had been saying only moments earlier.
Before Nathan could slide the revolver from its holster, the dog veered away from him and darted underneath the wagon instead. Nathan stepped away from the vehicle, worried that the dog meant to go under it and attack his legs. The animal stayed where it was, though, whirling around to face the men rushing after it. It bared its fangs and growled harshly at them.
The furious miners pounded up but stopped about a dozen feet short of the wagon. The dog was snarling at them now, and Nathan thought the sound was almost like a dare for them to come on and try to force the dog out from under the wagon. Nathan had backed away a good distance himself, and he still had his hand on the butt of his gun.
One of the miners threw an angry glance at Nathan. "That your dog, mister?" he demanded.
Nathan shook his head. "I've never seen the beast before," he replied.
"It came a runnin' toward you like it knowed you," the miner pointed out.
Before Nathan could again deny owning the animal, one of the other men said, "Don't be a fool, Brody. That damned dog's been around nigh onto a week, a long time 'fore this fella got here."
"I don't care," the man called Brody said hotly. He was the one carrying the rope, and Nathan realized that he was the one claiming to have been robbed of his gold dust.
But how could he have been robbed by a dog?
Brody shook the coiled rope at the dog and went on, "Look at the way he's hidin' under that wagon! I still say it's mighty suspicious."
"Look, mister," Nathan began, "I'm mighty sorry about whatever happened, but I don't know that dog, and he doesn't know me. He's just looking for a place to hide because he's so scared."
One of the other men laughed and said, "He ain't scared, he's just found hisself a place where he can fort up and chew our arms off if we try to get him out.
Brody slapped the rope impatiently against his thigh. "I'll get him out. He's got to hang, I tell you!"
"You're going to hang a dog?" Nathan asked incredulously.

We're giving away a free e-copy of the book.  Leave a comment for a chance to win.