The Western Fictioneers Library Presents: JUDGE ON THE RUN by Clay More 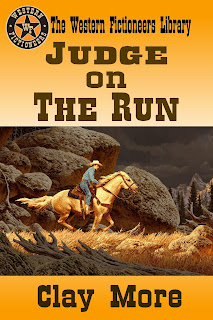 Wesley Talbot is a respected frontier judge devoted to the law. So why does he adopt the identity of wanted desperado Diamond Jim Chance and go on the run? Why is the ruthless bounty hunter known as The Deacon on a bloodthirsty quest to track down the judge? What dangers lurk in a hidden canyon in the Pintos Mountains? Who is the real mastermind behind a gang of vicious killers? And what secret that leads to a gunpowder-laced showdown lies in the church of a small Mexican village?

The answers to these questions can be found in JUDGE ON THE RUN, the action-packed novel that's the latest release from acclaimed author Clay More and the Western Fictioneers Library. Previously published as a Black Horse Western by Robert Hale, this newly revised edition is full of excitement and thrills.


JUDGE ON THE RUN is another fine action Western from Keith Souter writing as Clay More. Judge Wesley Talbot is a respected frontier jurist, but when a gang of outlaws raids the town where Wes is stopping over and kidnaps two women, he has to take desperate measures to deliver justice and rescue the prisoners. Complicating matters is the presence of a ruthless bounty hunter known as The Deacon who is on Wes's trail seeking revenge for his brother, who was hanged after being convicted of rape and robbery in Wes's court.

Souter really piles the troubles on his protagonist in this novel and keeps the pressure on with a series of gritty, well-paced action scenes, one of which is a brutal fight between two men in a pit that's very effective. He throws in some nice twists in the plot, including a final one that leads to a dramatic showdown in the church of a Mexican village and a satisfying conclusion.

I'm glad the Western Fictioneers Library has brought out a new edition of JUDGE ON THE RUN, because I probably never would have had the chance to read it otherwise. And I'm looking forward to reading more from Keith Souter.
--James Reasoner
Author of Rivers of Gold
Barnes & Nobles Nook Link
Posted by Livia J Washburn at 1:02 AM