During the War, soldiers didn't always have access to the best of foods.  They ate what they could and were happy to get anything edible.

The main fare of a Union soldier was hardtack.  It was made from flour, salt and water in Northern factories and distributed among the armies.  The issues the soldiers had with hardtack wasn't its longevity. In fact, there is hardtack that was made during the civil war that is still around today.

The problem with hardtack was that soldiers often broke their teeth trying to eat it.  Nicknames for the vile stuff ranged from sheet-iron crackers to teeth-dullers.  It was also called worm castles because weevils and maggots sometimes took up residence in it.

Since it was just about impossible to eat, soldiers broke it up with their rifle butts or softened it in their coffee or in grease from other foods.

The main sustenance of the Confederate army was cornmeal.  They used it in making Cush, which was beef and cornmeal fried with bacon grease, when they had beef and bacon grease. When they didn't, they made Johnny cakes, a concoction of cornmeal and wheat flour mixed in hot water or sometimes fried in animal fat.

Because of Union blockades, coffee beans weren't available in the South, so soldiers made their coffee from things like burnt corn, chicory, potatoes or even goober peas. Don't know what goober peas are? They even made a song about them, but that's a story for another blog. 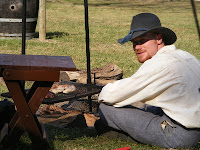 In reenacting, we are much more fortunate than the soldiers to which we are paying tribute in that we aren't lacking for food.

We still do all of our cooking using cast iron skillets and Dutch ovens, but our foods are a bit more extravagant. In the mornings, we fry bacon or sausage and then scramble eggs in a cast iron skillet.

For other meals, we cook pork chops or chicken breasts on iron grates.  There is something about food cooked over an open flame that just makes it taste better.  Some of us bake cakes or make cobblers in Dutch ovens.  There's all kinds of great foods to eat.  At a reenactment, we don't go hungry.

Matthew Pizzolato's short stories have been published online and in print. He writes Western fiction featuring his antihero character, Wesley Quaid, that can be found in his story collection, The Wanted Man and the novella Outlaw.
Matthew is the editor and webmaster of The Western Online, a magazine dedicated to everything Western and can be contacted via his personal website or on Twitter @mattpizzolato.