“When the time came for them to die, Pete Gossard cursed and Knife Hilton cried, but Wolfer Joe Kennedy yawned in the face of the hangman.”
Thus begins one of my all-time favorite short stories –it’s probably a three-way tie, with two others I’ll highlight here in future blogs (if no one beats me to it.) The story is called “The Last Boast,” and it was written by Dorothy Johnson –one of the greatest Western authors, and in my opinion the master of the Western short story (others have argued in this space for Elmore Leonard having that honor –in my book he’s a close second.) 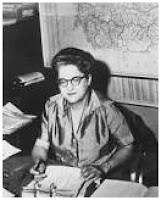 Although she wrote until her death in 1984, Johnson produced her two masterpieces in t he 1950s: the short story collections Indian Country (1953) and The Hanging Tree (1957). “The Last Boast” appears in the second of those volumes, as does the classic “Lost Sister”, which won the Spur Award that year. “Lost Sister” would probably rank much higher on any list of the greatest Western short stories of all time, but “The Last Boast” remains my favorite Dorothy Johnson story for this reason: in only 1700 words, Johnson spun a tale with such enormous emotional power that it still impacts me decades after I first read it.
Gossard, Hilton, and Wolfer Joe Kennedy are about to be hanged for dry-gulching and murdering two miners. The deputy marshal asks Kennedy, at the scaffold, “I was wondering –did you ever do one good thing in your life?”
Wolfer Joe looked into his eyes and answered with his lips pulled back from his teeth, "Yeah. Once. I betrayed a woman.”

The deputy is puzzled –that is a strange thing for a man to boast about with his last breath. Most of the following pages are a flashback in which Kennedy remembers the woman he loved when he was young, and who loved him.

Annie would do anything for him –even give up a stable life to follow him into the unknown. Kennedy himself knew that, even though that was loyal on her part, it was not a good investment for her.

He had few illusions about himself. Once he had said, grinning, "Reckon I was born bad." More accurately, he might have said, "I was born outside the law, and mostly I've stayed outside it."
And beyond even concern for Annie’s future, the depth of her love frightened him…
He saw love by the fire, and he could not endure looking for fear he might see it end, during that night or some year to come.

And so Wolfer Joe Kennedy had made a fateful decision, at the age of 29… a decision he could look back on as death stared him in the face, and say “yes, I did do one good, decent thing, one thing I can be proud of.”

I won’t give it all completely away, though you can probably guess how and why he betrayed his love and was proud of it. You should read it for yourself, either by buying the book or by doing a quick google search –as it turns out, this story gets assigned in high school and college English classes often, and is easy to find.

You should check out both of those books, though. In addition to “The Last Boast” and “Lost Sister,” between the two of them they contain several of the greatest western short stories ever published. In fact, if you were to assemble an informed list of the top ten western short stories, odds are that Dorothy Johnson alone would make up half of said list. Maybe you’ve heard of some of them: 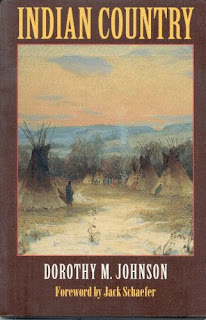 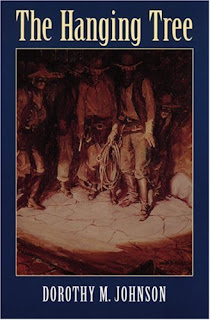 Both the above versions are out of print, but used copies are not difficult to find online.
Posted by Troy D. Smith at 5:00 AM