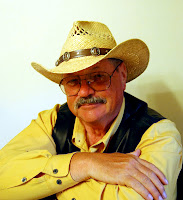 Someone out there is a lot more knowledgeable than I about surviving in the desert. But all of you in Arizona know that the Mojave Desert and the Sonora Desert and the waterless surrounds of Tucson and the trek from the Kofa Mountains that border the Colorado River near Ehrenburg to the Trigos are scenes from Dante.

That said, Arizona deserts are not endless miles of sand dunes like those made famous in French Foreign Legion movies. A man with two hands and a knife can survive.

There's some talk about barrel cactuses being full of water. Not true. They have juicy insides and you can squeeze that juice out and lick the moisture off your fist or from your bandana if you use that to squeeze the pulp. Barrel cactus pulp can give you diarrhea if eaten or lapped up on an empty stomach. So the best course would probably be to keep an eye out for hedgehog cactus. 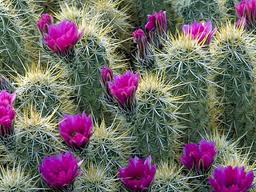 Hedgehog cactus has lots of plump branches that look like fat green spiny sausages. You lop the top off one with your Bowie knife, then shove your forefinger into the pulp. Use the knife to slice away the spiny part just like you were slicing the skin off a sweet potato, then cut the pulp off about six inches down. It will have a stringy core that you probably don't want to eat, but you can gobble the pulp off that core just like you would corn off a cob. It adds moisture to your system and nutrients, too.

The best thing you can find, though, is a prickly pear cactus. You can eat both the pads and the pears (which are best when they are red), and you can use the pads on wounds, too.

Mesquite beans are good. Yucca flowers are edible raw, and the young center stalks can be boiled and eaten like asparagus. Oh, you can also dig out the root and roast it. Plus, roots also give you soap. 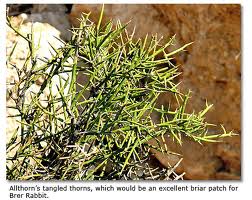 Allthorn's a plant your want to remember. It looks like a palo verde tree except that it's bark is stringy and brown instead of smooth and green. Allthorn is an antiseptic. A few twigs broken off and steeped to make a tea will sterilize your water, and it will kill bacteria in an open wound. If you've got dysentery, drink some of the tea, thinned with water. It'll stop you up.

Here's what one of my wounded hero's did in the desert:

I started close to the bottom of the up-cropping rocks and slowly lifted the glasses so I could see a little farther each time. Two things caught my interest – a clump of prickly pear and a packrat’s nest.

My shirt lay on the ground where I’d dropped it. I groaned as I bent to pick it up. Throbs of pain traced every heartbeat, starting in the middle of my back and exploding through the knot above my ear. I managed to hold on to the shirt as I straightened up. After a long moment, I started walking toward the prickly pear clump.

Each step meant placing a foot on the ground ahead and feeling for sharp stones or cactus spines before shifting my weight to it. While the clump was no more than a quarter of a mile away, the sun had settled on the horizon by the time I got there.

The arrowhead sliced through prickly pear ears like it was a paring knife, and its sharpened edges made short work of the spine clusters. I split the ear and scraped out a thimbleful of cactus flesh with my fingers, then smeared the pulp over the wounds in my side, back, and head.

The sap soon dried and prevented blowflies from laying eggs in my open wounds. The pulp and sap soothed. I took a deep breath and found I didn’t hurt as much.

The hero gets under a packrat's nest (piling the sticks over himself to keep the buzzards at bay) and managed to sleep. Then:

Food. I’d lathered my wounds with prickly pear pulp and sap before burrowing into the packrat’s nest. Prickly pear meant food, too. I picked up the arrow and the field glasses and made my way back to the cactus on tender feet.

I needed food, but rushing to the source would damage my bare feet. Instead, I placed each foot carefully, avoiding sharp bits of sandstone and wayward cholla thorns.

By the time I reached the prickly pear clump, the sun had risen to its full strength. I’d need to shade up before long, but at the moment, food was my biggest concern. 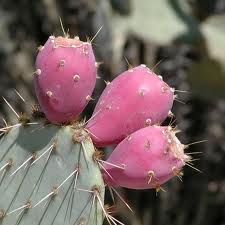 A few of the cactus pears showed tinges of red. They’d be tart but edible. I twisted a few off and brushed the hair-like spines off against my britches. After half a dozen, I could eat no more. The moist pears refreshed me, but weren’t water enough. I needed a barrel cactus. I needed shade. I needed a pair of shoes. And I needed meat if my body was to heal itself.

The prickly pear maze spread over a slight rise in the desert floor so I could see across the land for some distance. I lifted the field glasses that hung by a strap around my neck, divided the desert into sections in my mind, and carefully inspected each. Even then, I almost missed the smoke.

In the desert, a person can survive.

Now. These segments are from a book entitled "A Man Called Breed." From the comments to this blog, I will choose two people to receive PDF copies of the book, which is an out-of-print Black Horse Western by Chuck Tyrell.

Posted by ChuckTyrell at 8:30 AM