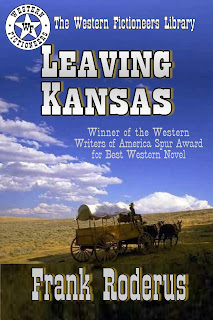 Available again for the first time in nearly 30 years, Frank Roderus's classic novel LEAVING KANSAS is the compelling story of a young man who considers himself born in the wrong time and place. Living on a Kansas cattle ranch, Harrison Wilke believes that he was destined for better things, more civilized things than life on the frontier during the last fading days of the Old West. Harrison's efforts to make that dream a reality lead him into nothing but trouble as he encounters rustlers, schemers, and a group of hard-faced men with a lynch rope . . .

LEAVING KANSAS won the prestigious Spur Award from the Western Writers of America as the Best Western Novel of the Year. It's the first of the Harrison Wilke trilogy from acclaimed, best-selling author Frank Roderus, which continues in REACHING COLORADO and FINDING NEVADA, both forthcoming from the Western Fictioneers Library, proud publishers of the very best in hard-hitting Western fiction.

Frank Roderus has been one of the highest regarded, most prolific Western authors for a long time, and I couldn't even begin to count the number of his books I've read over the years. Somehow, though, I missed his award-winning trilogy of novels about Harrison Wilke, so I'm glad that the Western Fictioneers Library is making them available again.

LEAVING KANSAS is the first novel in the series. It's the last days of the Old West, an era when the Indians and the outlaws have been tamed but old-timers still remember what it was like to have to take up the gun and the rope to bring justice to the plains. Harrison Wilke, in his early twenties, has few of those memories himself, and he's glad of that because he despises violence and longs to live in a more civilized, more genteel environment than the cattle ranch that belongs to his uncle. That's where Harrison seems to be stuck, though, so when he sees a way of possibly getting out and even being able to marry the girl of his dreams, he seizes it. In this noir-tinged tale, though, you just know that things aren't going to work out the way Harrison hopes they will.

It's easy to see why this book won the Spur Award for Best Western Novel. It's a compelling narrative, and even though Harrison Wilke is one of the least likable protagonists you're ever going to encounter, you can't help wanting to find out what's going to happen to him. Roderus skillfully tightens the strands of his plot until it seems like there's no way out for Harrison, which leads to a considerable amount of suspense as the book races toward its climax.

As I mentioned, this is the first book in a trilogy, and the Western Fictioneers Library will be bringing out the other two volumes in the near future. That's good, because I can't wait to read them.
--James Reasoner
Author of Wind River

Barnes & Noble Link
Posted by Livia J Washburn at 1:03 AM