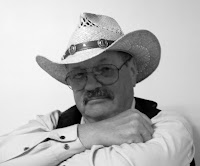 When I started writing Pitchfork Justice, I did it in a first-person POV, a first for me. Ness Havelock's riding the Outlaw Trail when he's met by Isom Dart, a historical character who was known as "The Outlaw Mail." Dart tells Ness that a friend needs his help in Saint Johns, Arizona. Dart also says there are rumors on the Trail that someone is gunning for Ness. He shrugs it off. Wouldn't be the first time.

Ness wants to bed down in Moab, Utah, at the house of a friend. But at the livery stable, he hears that Ruel Gatlin is in town. Ruel's sworn to kill Ness Havelock because Havelock killed three of his brothers in a gunfight in Telluride, Colorado. But here's the flashback scene that sets up what kind of baddie Ruel Gatlin is.

Actually, in those days, Ruel Gatlin had been deeply in love. His brothers insisted that he go to school, where he was the oldest student, if not the biggest.

But that didn't matter. Young Ruel was in love with Rebecca Shoemeister and his adoring eyes followed her as she taught sums to the younger students. He dwelt on every word she spoke and he did every homework assignment with complete diligence.
Lawrence and Mort, older than Ruel by a dozen years, saw his infatuation and teased him unmercifully.
"But she's only nineteen," Ruel argued, "and I'm almost fifteen. Lots a guys got wives as older than them. Just look at the Swensens at the bakery. I bet you a dime to a dollar that the Dane's younger than his stringbean wife. So what's wrong if I'm a little sweet on Miss Shoemeister?"
His brothers laughed.
Ruel liked story time best of all, because Miss Shoemeister read aloud to the students in her melodic contralto voice. And Ruel learned of knights and chivalry and how a man is supposed to throw his coat in the mud so a lady can step on it and not dirty her slippers.
He sometimes saw himself as the knightly gentleman and Rebecca as the maidenly but noble lady. And he wished for a puddle to throw his coat into so she could step on it.
Sometimes when Miss Shoemeister bent over a young scholar to guide a hand or give a word of encouragement, the sun would catch the stray hairs at the nape of her neck and turn them into burnished gold. In those moments, Ruel Gatlin loved Rebecca Shoemeister so much it felt like his heart might just melt.
Then one day Marshal Flint came looking for Ruel long before time for school to end. He stuck his grizzled gray head through the door and stood there until Miss Shoemeister noticed him.
"Yes, Marshal?"
"I come for Ruel Gatlin, Miss."
"Mister Gatlin is at his studies."
"Sorry, Miss. This is important. Could I see you for a moment outside?"
Miss Shoemeister stepped out to converse with the marshal for a moment, then came back in. She walked to Gatlin's seat on the back row and laid her hand gently on his shoulder. He found it very hard to breathe.
"Mister Gatlin. Something important has happened down town in front of Ma Blaisdell's place. Could you go with the marshal? Please." Her eyes looked very sad and Gatlin wondered why. But he couldn't refuse this woman he loved.
"Yes, Miss Shoemeister," he said properly. "I'll go with him right away." How he'd practiced so he could speak to her correctly when spoken to.
Gatlin grabbed his hat and rushed outside. The marshal fidgeted.
"Come on, son," he said gruffly. "This ain't gonna be pleasant for you or me." The marshal swung up on his big bay horse and waited for Gatlin to come with his mouse-colored pony.
"What's happened, marshal?" Gatlin could not contain his curiosity.
"You'll find out soon enough." The marshal turned his horse toward Ma Blaisdell's. Gatlin followed.
When they got there, Gatlin and the marshal had to use their horses to shoulder through the crowd. Once through, Gatlin saw the still forms of his three brothers.

The manners and regard for gentlemanly conduct Ruel Gatlin learned because of his love for Rebecca Shoemeister saved Ness Havelock's life more than once.

But there's another baddie in Ness's life. Harlow Wilson, the head of the Pitchfork Outfit, and the man who is determined to take Saint Johns, Navajo County, and the territory of Arizona. Except he's a con man and a pedophile. Early on, Ness has to bury a young boy that Wilson whipped to death. Near the end of the book, Havelock is whipped severely by Wilson as well. But this cut from the middle shows what kind of bad baddie Harlow Wilson is.

As he walked through the living room, the crash of china hitting the kitchen floor made him smile. The day would not be wasted. Now he had reason to discipline Bobby.
The youngster stood stiff, with his hands pressed to his legs. He stared at the shattered cup, looking up with frightened eyes when Wilson reached the door.
"You're expected to wash and dry the china, Bobby, not shatter it."
Speechless, the boy nodded.
"Wait for me at the woodpile, Bobby." Wilson stepped into his bedroom to get the braided leather quirt he used to discipline his boys.
Outside, cordwood for the fireplace was stacked neatly, split and ready to haul to the wood box. Bobby stood next to the piled wood.
"You will lower your breeches, Bobby, and bend over the woodpile." Wilson slapped his leg with the quirt. The boy obeyed, with his butt bared. Harlow Wilson brought the leather quirt down hard on the boy's bare behind. The youngster mewled as a line of blood sprang up.
"Shut up, Bobby," Wilson said, almost gaily. "Take your discipline like a man."
The boy nodded. Tears squeezed from his eyes and trickled down his face.
Wilson's eyes shone. His breath came quickly. His cheeks flushed and his lips curved in a half smile. He raised the quirt and slashed the boy's rump again. Blood rose in the tracks of the braided leathers.

The boy made no sound this time, but the tears flowed. He couldn't stop them. He took quick breaths through his open mouth.
"Now, Bobby. When I ask you to do the dishes, I wish you to take due care and finish the job without breaking any china, is that clear?" The quirt descended again. The ends of the leathers barked skin from the boy's flank.
"Mister Wilson," a voice said.
Wilson started. He turned to see who had spoken. Then put on a smile that was nearly a smirk. "Why Mister Gatlin. What brings you to Saint Johns?"
"One moment," Wilson said to Gatlin, and redirected his attention to the boy. "Bobby, I'm sure you learned your lesson. No more broken china. Is that clear?"
The boy nodded.
Viciously, Wilson brought the quirt down on the bare flesh in front of him.
"What do you say, Bobby?"
"Yessir, Judge Wilson. Thank you, sir. I learned my lesson, sir. I will not break any more china, sir." The boy's voice cracked, but he was able to get the required litany out.
"Good. Pull up your trousers and get back to your duties."

Whew. And that was only part of one scene.

Anyway, the more Gatlin watches Havelock and Wilson, the more he comes to see that Havelock's a good man. So when Wilson and Pitchfork men make off with the woman Havelock loves, here's what happens.

"Big brother," I said to Garet. "I've got one more favor to ask."
"You got it."
"Drop by Rancho Pilar and tell Don Fernando that I will keep my promise. I'll bring Rita back. I swear."
Garet slapped me on the leg. "Go to it, Ness. I'll tell him."
The light was nearly gone as my buckskin made his way out of the cut and into the swale they called Cienega. He wasn't more than three steps into the open when he pricked his ears toward the tree line. I moved my hand closer to the butt of my Colt .44 as Ruel Gatlin rode from the trees. If there was one time for a showdown with Gatlin, it wasn't now.
"Gatlin." I raised my voice. "I know I keep asking you, but I'd take it kindly if you'd just put this thing off a little longer. Could you?"
He actually laughed. Then I noticed his hands were on the saddle horn.
"Ness Havelock. You're a hard man," he said. "I figured you'd come riding after that lady."
"That's where I'm going."
"If you don’t mind, I'd like to ride along."

When you've got good baddies and bad baddies, things can get very interesting.

Posted by ChuckTyrell at 9:28 AM