So, I’m supposed to choose my all-time favorite Western movie for today’s posting. That’s like asking me to choose my favorite horse or dog out of all the ones I’ve known, or like asking a mother to choose her favorite child. It’s just about impossible. There are so many classic Westerns to choose from. High Noon, of course. Shane, a film which stayed pretty close to the book, a book which by the way was required reading at my all male Catholic high school. They still have copies in the school library. How the West Was Won, a sprawling epic. 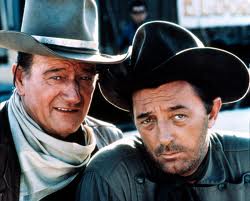 Since I’ve got to narrow this down, I’ll turn to the quintessential Western actor, John Wayne, the Duke. Even that is tough, picking my favorite Wayne Western. There are some easily eliminated: McClintock!, barely a Western, and just plain annoying. The Man Who Shot Liberty Valance, considered a classic by many, just plain too drawn out and boring for me. And of course True Grit, my opinion of which can be summed up in just two words, by changing the title to True (starts with sh, rhymes with grit). Loathed and despised are too gentle of words to sum up my feeling about that film.

When I boil the list down, I come up once again with El Dorado. Howard Hawks insisted to his dying day that El Dorado was not a remake of his earlier Rio Bravo. However, it clearly is, with John Wayne reprising his role, Robert Mitchum taking the Dean Martin role as the drunken lawman, and James Caan taking the Ricky Nelson role as the kid who rides into town and the middle of trouble.

I really like both films. I like El Dorado better for several reasons. First, James Caan is far superior to Ricky Nelson as an actor, who I’m certain was hired just because he was a teen idol at the time. I also prefer Robert Mitchum to Dean Martin, although Martin certainly did a credible job. I also like the action a lot better in El Dorado. There’s more of it, and it’s a bit grittier. Both films have welcome touches of humor. The one scene in El Dorado that always cracks me up is when Caan’s character Mississippi, in the middle of a gunfight, dives into the street in front of two galloping horses, which promptly jump over him. After the shooting is over, Wayne asks Caan why he jumped in front of the horses. Caan replies that horses will never step on a man. I’m certain the line was meant to be humorous, at least I sure hope so, but I wonder how many people got it. Anyone with the least bit of knowledge about horses knows a panicky horse will run over anything in its way.

El Dorado, for me, has everything a good, classic, traditional Western movie should have: plenty of action, exciting shoot-outs, good, strong, likeable heroes, tough and lovely ladies, and some nice touches of comedy. And of course three fine actors in the lead roles. If you enjoy classic Westerns, you should love El Dorado.