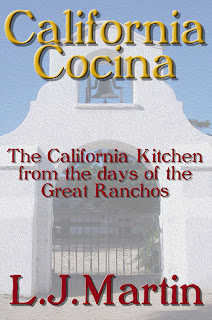 California Cocina is a look at the cocinas (kitchens) of the great California ranchos before and after the Gold Rush.  The California gold rush was the greatest migration in the history of the world, up to that time, when 350,000 from all over the world flooded the "gum san" or gold mountain, looking for the streets lined with gold.  The real fortunes were made from mining the miners, selling goods and services to those many Argonauts who rushed in.  California Cocina consists of some of my original writing, taken from my novels, which relates to food and kitchens, and from the books of many observers of the time.  The excerpt below is typical of the content:
Los Angeles is a city of some 3,000 or 4,000 inhabitants, nearly a century old, a regular old Spanish-Mexican town, built by the old padres, Catholic Spanish missionaries, before the American independence.  The houses are but one story, mostly built of adobe or sun-burnt brick, with very thick walls and flat roofs.  They are so low because of earthquakes, and the style is Mexican.  The inhabitants are a mixture of old Spanish, Indian, American, and German Jews; the last two have come in lately.  The language of the natives is Spanish, and I have commenced learning it.  The only thing they appear to excel in is riding, and certainly I have never seen such riders.
Here is a great plain, or rather a gentle slope, from the Pacific to the mountains.  We are on this plain about twenty miles from the sea and fifteen from the mountains, a most lovely locality; all that is wanted naturally to make it a paradise is water, more water.  Apples, pears, plums, figs, olives, lemons, oranges, and "the finest grapes in the world," so the books say, pears of two and a half pounds each, and such things in porportion.  The weather is soft and balmy--no winter, but a perpetual spring and summer.  Such is Los Angeles, a place where "every prospect pleases and only man is vile."
From the journal of
William H. Brewer
Sunday Evening, December 9, 1860
Los Angeles
And:
Clint found an adobe with a small sign, JUANITA'S CANTINA, and tied the horses to the rail in front, loosening the cinch on the gray, which had carried him the last few miles into the village.  He had grazed the horses along the way, while he had been limited to the old man's small portion of frijoles and tortillas.
As soon as he pulled away the cowhide that covered the doorway, he paused, closed his eyes, and inhaled deeply in appreciation.  He knew he had come to the right place.  Just outside the backdoor of the small cafe, he saw a cooking pit with a metal grill.  A variety of pots were located on the grill and the odors that emanated from them, some in roiling steam, promised what was to come.
He sat at one of the many plank tables and smiled at the approaching woman.  She had obviously partaken of the succulent dishes often, since she waddled over, melon-sized breasts straining to escape from her red-dyed jerga blouse.
"Buenos dias," she said, grinning at her early customer.
"Feed me, senora, pro favor," Clint said simply, and the woman beamed and hurried away.
She returned with a tray full of steaming delights, setting them in front of him.  He recognized the tortillas and frijoles and salsa, but when he looked quizzically at the other bowls, she explained each dish with a point of a stout finger whose joints bulged.
Cordero cabazo, lamb's head; migas, sour bread sliced thin and fried in garlic oil until crisp; pastel de tomal, a pie of onion, garlic, chicken meat, beef roast, corn, tomatoes, peppers, and olives, richly spiced, and served in a masa cheese crust; mostaza, wild mustard greens in olive oil and garlic; pie cerdo, pig's foot.
Clint smiled and said, "Con vino, por favor," and the woman hurried away for a mug of wine.
from the novel
The Benicia Belle
by L. J. Martin
Of course there are also lots of recipes, many converted to today's kitchens, but many purely historical, such as:
Corning Beef and Pork
Beef
water
1/2 oz. saltpeter
1 3/4 pounds table salt
3/4 pound brown sugar
Place beef in barrel with a bung, or crock if you must, and cover with cold water.  Let stand for two days, then drain off water, keeping track of how much it took to cover.  Add that amount to a pot, and to each gallon of water you add back, an equal amount of saltpeter, brown sugar, and salt as shown above.  Bring to a boil for a quarter hour, skim, then pour over beef.  Weight beef down to keep under brine.  Ready in ten days.
To corn pork, do the same, only add a cup of molasses to saltpeter, salt, and sugar and rub meat with mixture and set in cool place for two days.  Return to bar­rel, but this time rest meat on rack above water level and each day drain off and pour over pork.  After two weeks, take meat out and rub well with salt.  Make a new batch of boiling brine and pour over, covering meat with it.  Leave covered and weighted down, checking regularly for another two weeks.  If you don't like the way it's coming along, rub with salt again.  Pork thus prepared should last up to two years.
If you enjoy history you'll enjoy a peek into the great cocinas of old California.
California Cocina, available in both print and eBook:  http://amzn.to/13nQECE 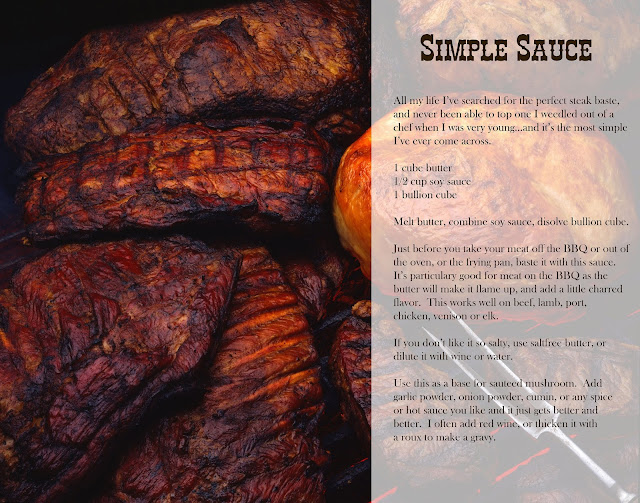