Today I am highlighting a story from The Peacemakers, volume 2, and will be giving away a pdf copy of the book to one lucky person who comments today.


The tale is "Blackwell's Run"... one of my Blackwell short stories published by Western Trail Blazer, which was honored (and I was very honored) as a finalist in last year's Peacemaker Awards competition. This story, by the way, will also appear in a WTB collection of Backwell stories due out later this year (the first, I hope, of many.)

The set-up: Sergeant Max Blackwell's commanding officer, Lt. Jacobs, has gone certifiably nuts and has delusions of grandeur. This is especially unfortunate in that it occurs in hostile Sioux territory, and the lieutenant is madly leading them into certain death. Blackwell and his subordinates realize that their only choice is mutiny...


“You can not stop God's will, Sergeant. Like Lucifer, you can only succeed in delaying it. And then you will be cast into hell.”

The other soldiers were also on the ground now, clustered behind their sergeant. Ledbetter aimed his carbine at Jacobs.

“If we're cast into hell, you lunatic,” he snarled, “you’ll be there waitin' for us.”


And what happens next....? You'll just have to read it and find out!

Check out all three volumes of THE PEACEMAKERS: 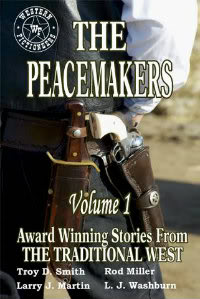 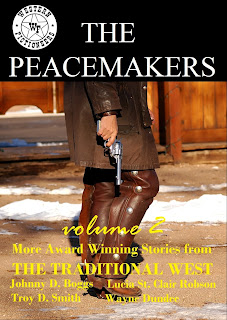 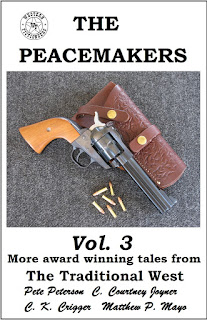