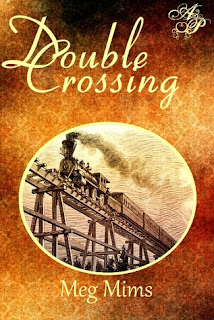 The authorities are convinced Lily Granville’s wealthy father committed suicide; she’s equally convinced he was murdered as part of a scheme to obtain control of a California gold mine. Accompanied by a missionary who intends to overcome her misgivings and marry her, the strong-willed socialite embarks on a cross-country quest to find her uncle and the mine’s missing deed. Deceitful relatives, the late tycoon’s attorney, and a rowdy Texan drifter—along with nearly everyone else Lily meets as she wends her way westward on the new transcontinental railroad—could be friend or foe. Dare she trust anyone?

Double Crossing won the 2012 Spur Award for best first novel, and with good reason. The level of historical detail is astonishing, but author Meg Mims establishes such a seamless atmosphere that the tale never bogs down under the weight of what must have been mountains of research. If for no other reason, the story is entrancing for the virtual experience of riding the rails in 1869.

But there are plenty of other reasons to enjoy Double Crossing. With very few stumbles, Mims creates believable suspense by constantly shifting suspicion from one character to another, until everyone in sight looks guilty. In fact, almost everyone is guilty of something, though perhaps not what readers might suspect at first glance. Agatha Christie, eat your heart out: Double Crossing is Murder on the Orient Express with western-genre sensibilities and without Hercule Poirot’s pompous interference.

Read this book. The history lesson is enjoyable, the characters are mesmerizing, and the twists and turns in the plot are more than worth the price of a Pullman ticket. The sequel, Double or Nothing, bowed March 13 promising to plant Lily in the middle of another life-or-death caper. 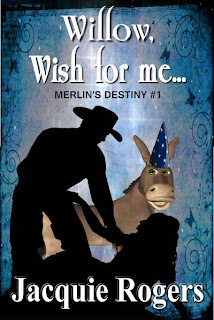 To escape the Boston society rigmarole she despises, debutante Willow runs away to the middle of nowhere on the western frontier and settles into a solitary life as an herb farmer. With her faithful guard-chicken (yes, you read that right: guard-chicken) as company, she’s mostly content, until her wish for a fairy-tale romance is granted by King Arthur’s Merlin, reincarnated as a professional gambler’s mule.

The premise for this short, quick read is so wacky, readers will have to leave any preconceived notions about genres at the door. Actually, that’s not hard to do. As one might imagine, Merlin’s magic—not quite as accurate as it once was—complicates almost everything it touches. Author Jacquie Rogers imbues Willow, Wish for Me with both subtle and slapstick humor, develops the characters well, and sets the scene beautifully. The result is a delightful romp that twists both standard western tropes and Arthurian legend into one heckuva train wreck—in a good way.

As with most shorts, readers shouldn't expect intricate plot twists or a slow build to a happily-ever-after ending. What they should expect is plenty of typically western action (including a climactic gunfight); a determined princess; a slightly befuddled, tarnished knight, and a black-hearted pretender to the throne complete with oily henchmen and a no-holds-barred plan for securing the heroine’s castle.

The humans in the story are fun to watch, but the animals steal the show. Merlin the mule narrates the first and last chapters with aplomb, but the chicken emerges as the star.


Kathleen Rice Adams is a Texan, a voracious reader, a professional journalist, and a novelist in training. She purchased both books reviewed in this post. Her opinions are her own and are neither endorsed nor necessarily supported by Western Fictioneers or individual members of the organization.
Posted by Unknown at 9:43 AM