COURAGE CLOSE-UP: THE OTHER CUSTER by Tom Rizzo 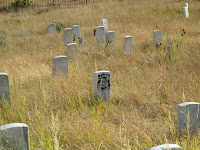 A gentle breeze brushes the wild grasses and bright yellow clover against a few of the weathered and vandalized marble headstones at Last Stand Hill. This is the spiritual resting place for those members of the 7th Cavalry who lost their lives in the Battle of the Little Big Horn.

The battle is synonymous with one man -George Armstrong Custer, who distinguished himself during the Civil War as an officer who commanded his troops from the front. Regardless of the controversy associated with his actions at the Little Bighorn on June 25, 1876, Custer's courage has never been questioned.

But, there were two other Custers who shared the courage and the agony of defeat on Last Stand Hill. In addition to George, the battle also claimed the lives of younger brothers Tom and Boston. Their bodies were supposedly found within yards of one another.

George Armstrong Custer often said his brother, Tom, should have been the one awarded the rank of general.

Thomas Ward Custer, who went to war at the age of 16, stands as one of history’s forgotten heroes of the American Civil War.

Tom – let's call him the other Custer – was a two-time recipient of the Medal of Honor for bravery--the first soldier to receive the dual honor, and one of only 19 in history to earn two medals.

Tom Custer earned his first Medal of Honor during the Battle of Namozine Church . On April 3, 1865, he led the charge of the Second Brigade against the Confederate barricade. With bullets flying, Custer coaxed his horse over the barricade, causing the Confederates to fall back in confusion.

He seized the flag of the Second North Carolina cavalry from the bearer, and called for these around him to surrender. Custer captured three officers, and eleven enlisted men.

Custer’s actions at the Battle of Sailor’s Creek (also known as Saylor’s Creek) earned him a second Medal of Honor. This engagement, larger than the fight at Namozine Church, involved both cavalry and infantry. Custer, upon hearing the command to charge, urged his mount forward, and leaped the enemy barricade.

Even though surrounded by Confederates, Custer fired his pistol scattering the soldiers. When he spotted the color bearer, which some soldiers began to rally around, Custer – wounded in the face – charged, and captured the flag. Battle flags were important on the field of battle. In combat, soldiers kept their eyes on their regimental flags, and followed them during advances or retreats.

The loss of a regimental flag was considered a disgrace to the command. Ironically, GeorgeArmstrong was the first Union soldier to capture an enemy flag in the Civil War.

Interesting sidebar: General Custer had to place Tom under arrest to get him the needed medical attention. The younger Custer was also honored by being brevetted through grades to major of volunteers and later to lieutenant colonel in the regulars. After the war he was commissioned directly into the regular army and soon joined his brother's regiment, the 7th Cavalry.

Tom Custer wasn’t yet 20 years old when the Civil War ended. After being appointed a first lieutenant in the 7th Cavalry, he was wounded in the Washita campaign of the Indian Wars, in 1868. Later, the younger Custer was assigned Reconstruction duty in South Carolina.

In 1873, he participated in the Yellowstone Expedition, the Battle of Honsinger Bluff, and the Black Hills Expedition.

Two years later, Custer was promoted to Captain, and given the command of Company C of the 7th Cavalry. 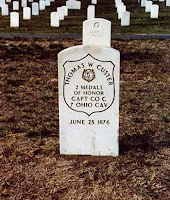 Tom Custer was buried on the battlefield, but exhumed the following year and reburied in Fort Leavenworth National Cemetery.

A stone memorial slab marks the place where his body was discovered and initially buried.

Tom is author of Last Stand At Bitter Creek. Visit him at: