FASCINATING FLAWS: The Scars That Bring Us and Our Characters to Life ---by Marc Cameron

If you looked closely at the inside of my bride’s left hand, you’d see the a little web of scars under her wedding band. The story behind them typifies her personality, and, frankly, the reasons I was attracted to her in the first place. She didn’t have these particular scars when we got married, but she did have one on her neck and a little one on her ankle—and each of those tells a story as well. Now she has gobs—of scars and stories.  So do most of us, I’ll bet. Babies, breast cancer, emergency appendectomies, horseshoe nails…heck, just living life, does that to you.

They say: “clothes make the man”, but I think our scars…or at least the wounds that give us those scars make us—and the characters we create—interesting.

Some of the scars on my hands are from police work, but most are from shoeing, or otherwise working around horses. At least three are from stupidity with pocketknives. I have a scar between my eyes from an overzealous deputy marshal during defensive tactics training. She thought I was ready and attacked me with a baton while I was explaining a particular technique to the rest of the class. I could pinch my nose together and blow blood-bubbles out the wound so it was really kind of cool. Anyway, she and I both have stories to tell over that incident.

My two newest wounds—that will shortly become scars—are from changing the oil on Modestine, my BMW motorcycle, before we ride down the Alaska Highway to Texas in coming weeks.

A guy I once fought flipped himself (at least that’s the way I remember it) through a sliding glass door as he was trying to get away from me. This was pre-shatterproof days so the door all but exploded into horrific daggers of glass. The guy froze on his back, legs in the air, as still as a statue with a long shard of glass sticking out of his…let’s just say below his hip pocket. Missed anything too important by a few centimeters, but it sure stopped the fight…and he’s got a heck of a battle scar.

My grandpa on my father’s side was one of the kindest men I ever met. He was a muleskinner, building roads with his team in the 20s, owned a honkytonk when my dad was a youngster and worked in the oilfields in West Texas. Now, that man had some scars. It baffled me as a boy when I’d help him build fence and he’d skin a knuckle and keep working—when I was sure we needed to go back to the house and get a band-aid before he bled to death. He had a scar on the back of his neck shaped like a half moon, apparently left years before when someone in his honkytonk smacked him with the base of a broken beer bottle. As a boy, it was a big deal to know that my sweetheart of a grandpa had a past that included a bar fight or two.

Our oldest son has a scar over his eyebrow from the nine stitches he got when he got bucked of a little horse I was training. He was six years old and should never have been on that particular horse by himself. I carry some internal scars from the guilt of putting him up there in the first place.

One of my defensive tactics instructors in US Marshals Basic had a long scar across his cheek. He was an accomplished kick boxer and all around tough dude. As basic deputy trainees, we came up with dozens of scenarios of knife fights, arrests gone bad, and all sorts of great stories. After graduation, the instructor told us the truth. The chain had broken on his heavy bag while he was kicking it, snapping back and impacting his face. Essentially, he’d been knocked out by his training equipment.

Some of our scars are internal--physical and more figurative. I came off a patrol horse when I was a young mounted police officer in what we affectionately called an “involuntary rapid aerial dismount”.  Six ribs snapped in the process, putting me in the hospital. Every few months those internal scars decide to act up and re-tell me their story, prompting my wife to force an aspirin on me just in case I’m having a heart attack.

Sometimes it’s the emotional scars that affect us the most deeply.  Bad decisions, inaction, harsh words—both spoken and received—illnesses, loss of loved ones, shattered relationships, all scarify our souls. Hopefully, a friend or pastor or bishop or rabbi or whatever sin eater we put our faith in, can help us get past the really bad stuff. But we still come out changed—maybe even better.

Over the course of four books my protagonist has had little pieces of his body and soul whittled away by the life he leads. When last I left him, he could hardly walk, had just lost someone for whom he cared deeply and…well, I don’t want to give too much away. The point is, he ends up with lots and lots of scars. That’s what I believe makes him real. 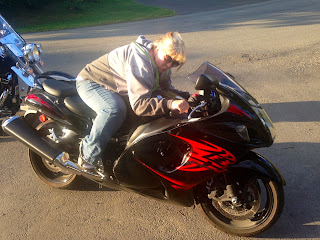 In the MUSIC MAN, Professor Harold Hill says “the sadder but wiser girl” is the girl for him. I feel that way about people and literary characters who look too perfect.

I don’t care about being married to a hand model. I prefer the sort of woman who, knowing little about horses when I married her, would pull over when she saw a young foal tangled in barbed wire and do all she could to free the poor thing, even if it meant a trip to the emergency room, stitches, and getting her wedding ring cut off.

Marc Cameron is a retired Chief Deputy US Marshal and 29-year law enforcement veteran. His short stories have appeared in BOYS’ LIFE Magazine and the Saturday Evening Post. He has published nine novels, six of them Westerns (several as a ghost writer and two under his pen name, Mark Henry).  His present Jericho Quinn series—NATIONAL SECURITy, ACT OF TERROR, STATE OF EMERGENCY and TIME OF ATTACK (February 2014 Kensington) features an adventure motorcyclist, Air Force OSI agent and renaissance man who spends his days sorting out his life and kicking terrorist butt.  Marc lives in Alaska with his beautiful bride and BMW motorcycle.
Visit him at:
www.marccameronbooks.com
http://www.facebook.com/MarcCameronAuthor