When first asked to write a blog about my favorite Western film, the Lays Potato Chips slogan, "betcha can't eat just one," flashed into my mind.

At the top of my list is John Ford's The Searchers, a 1956 film ahead of its time.

The film confronted uncomfortable moral issues - racism and sexism - that American society wouldn't start to address until a couple of decades later. I suppose there's a danger in trying to read too much into a screenplay, but this wasn't just another run-of-the-mill John Ford Cowboys and Indians movie. Of course, I wouldn't appreciate the themes until years later.

The sometimes-ambiguous story - adapted from a novel by Alan LeMay - centers on an ex-Confederate soldier's long quest to find his nieces, Debbie (Natalie Wood) and Lucy (Pippa Scott), who were kidnapped by renegade Comanches after they attack and slaughter his brother, beloved sister-in-law, and a young nephew.

John Wayne, in his most demanding emotional role of all the Westerns he starred in, plays Ethan Edwards, a middle-aged Civil War veteran who returns to the home of his brother three years after the war ends. No explanation is provided about where Ethan has been. He brought with him a quantity of Yankee gold coins that his brother Aaron (Walter Coy) agrees to hide.

When I first saw the film, I felt a little off-balance watching Wayne's Ethan Edwards.

His role took me by surprise because the kind of man he portrayed was so unexpected --the antithesis of his previous roles as the running', gunnin' mythic Western hero I was so used to seeing and rooting for. From the outset, it's clear that Ethan is a man with demons.

When Ethan finds Lucy's defiled body in a canyon near the Comanche camp, her finance, Brad Jorgensen (Harry Carey, Jr) becomes enraged and recklessly rides into the camp on his own and gets killed. For the next five years, Ethan and his adoptive nephew, Martin Pawley (Jeffrey Hunter) conduct a relentless search for 16-year old Debbie and for Scar (Henry Brandon), the Comanche chief who abducted her. 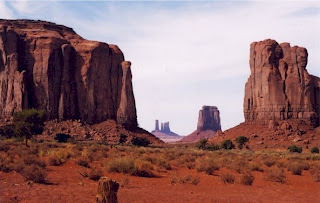 Majestic Monument Valley, situated in Northern Arizona and southwestern Utah, serves as Ford's storytelling canvas, and filmed on land belonging to the Navajos.

The valley is a stand-in for a story that takes place in west Texas in 1868. The landscape plays as integral a role in the film as the actors. Its rugged beauty, utter vastness, and emptiness befits Wayne's vengeful character.

In The Searchers, Wayne delivers Ethan Edwards as an imperfect protagonist--a dark, brooding, mysterious loner whose eyes and words reflect his undisguised hatred of Indians.

Ironically, Ethan  seems quite familiar with their language and culture. The character, part psychopath and part racist, is layered with complexity. He's a man who hates beyond the grave. When in one scene, for example, the grave of a dead Indian is discovered, Wayne pulls his gun and fires twice, shooting out the dead man's eyes, telling his nephew that if the Indian has no eyes, he'll be doomed to wander in the winds for eternity.

The nephew, by the way, is one-eighth Cherokee. In yet another plot twist, we learn that Ethan was never comfortable with Martin being a part of the brother's family even though Ethan is the one who found Martin when he was abandoned as an infant. 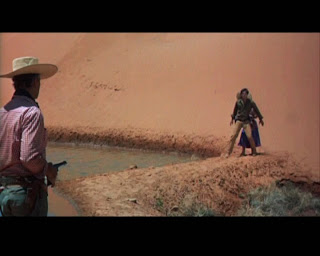 Ethan and Martin's journey take them to New Mexico Territory where they are lead to Scar. Debbie, they discover, is now an adolescent and one of the chief's wives.

She meets her uncle and half-brother outside the camp and tells them to leave without her because she has become Comanche. Blinded by rage, Ethan tries to shoot her, but Martin shields her from harm.

Ethan is wounded by an Indian arrow, but the two manage to escape, Martin saves his uncle by tending to the wound, but is furious at Ethan's attempt to kill Debbie, and wishes his uncle dead. "That'll be the day," Ethan responds.

We realize Ethan's commitment to rescue Debbie isn't for any humanitarian reason. He feels compelled to kill her because she has become "the leaven's of a Comanche buck."

The two men return home empty-handed, but later learn of Scar's location and resume the search. Under the command of the Revered Captain Samuel Clayton (Ward Bond), a makeshift band of Texas Rangers, accompanied by Ethan and Martin, locate the camp.

Clayton plans a direct attack, but allows Martin to sneak in and rescue Debbie, who welcomes him. Martin ends up killing Scar.

Ethan provides the finishing touch by scalping the Comanche leader.

When Debbie sees Ethan, she tries to escape, and he gives chase. Martin is unable to intervene.

But, instead of killing her, he takes her in his hands, lifts her to the sky, lowers her to his arms, and says, "Let's go home, Debbie." 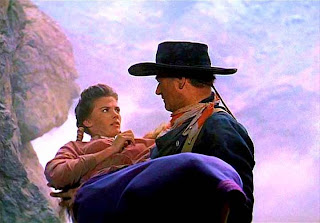 A promotional synopsis by Warner Brothers stated that "…in his obsessive five-year quest, Ethan encounters something he didn't expect to find: his own humanity."

This sounds too tidy. Too simplistic.  Ethan Edwards, as far as I'm concerned, is far too conflicted for such a neat one-sentence conclusion. Emotions - pain, loneliness, revenge and hate - don't change or vanish with a snap of a finger.


Ford, in several scenes, reveals that atrocities committed by the Indians fueled Ethan's hatred and thirst for revenge. Sixteen years earlier, Ethan's own mother was massacred by Comanches.

At the same time, Scar's viciousness stems from his own appetite for revenge: "Two sons killed by white men. For each son, I take many . . .  scalps."

Ford's symmetrical closing of The Searchers reflects the film's opening.

The director utilized a framed rectangular doorway to introduce Wayne's character at the beginning. At the conclusion, Ford gives us a view of Ethan holding his arm, then walking away - alone - with the cabin door closing on his receding image. (Check out the video snippets).

Does the healing process begin for Ethan? Maybe or maybe not. I doubt it. 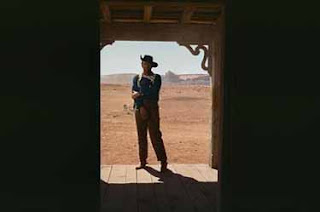 The Searchers enjoyed box-office success. The American Film Institute named it the Greatest American Western of all time, even though it received no major Academy Award nominations.

For some strange reason, the New York Times, in a June 12, 1979, obituary of John Wayne, never once mentioned his role in The Searchers. How it could be ignored is baffling.

This is merely a Cliff notes version of The Searchers. There is so much more to this story and the characters who star in its telling. 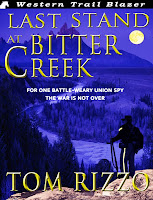