Today I'm going to tell you about another of my favorite western short stories- believe me, this is one everyone should download and read. It is one of the most powerful, affecting works of short fiction I've ever read, and it still resonates with me almost twenty years after I first read it in the late, lamented Louis L'Amour Western Magazine.

"The Art of Dipping Candles" is by Judy Alter, winner of -among many other things -WWA's Owen Wister Lifetime Achievement Award, and for 22 years the director of TCU Press. The story is based on the true story of a woman whose family was attacked by Comanches, and how she used the art of dipping candles to protect them. 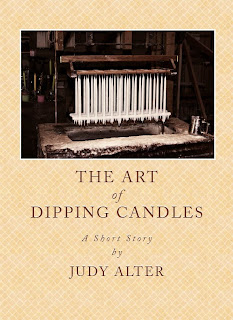 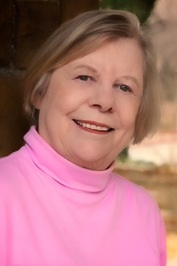 Here is an excerpt:


My mother doesn't make candles any more. Her candles used to be the smoothest and straightest in North Texas. They burned bright with an even flame and never smoked. Ma ran candles in the late fall, when Pa had killed a steer and she had rendered the tallow. She'd make more candles than we needed for daily use for the whole year, just so we could have them all around the house at Christmas. Sometimes, in the summer if she could find beeswax, she made a second batch, but beeswax was hard to come by.
Ma knew just how much clay from the Red River bottoms to put in the kettle so the candles would have some color, and she knew how long to wait for the dirt to color the tallow and then settle to the bottom so that the candles wouldn't be gritty. In front of our cabin Pa had built a stone pit just sized to hold the kettle above a fire, and Ma spent hours there, dipping a wick over and over again, hanging the finished candles to dry, admiring her handiwork when she was done. Sometimes she poured the hot tallow into a mold and it would set in a hour or two on a cold December day, but there wasn't any art in that, she said. Ma liked to dip her candles by hand.
"Mama, can I dip a candle?"
"No, Elizabeth, you haven't the patience yet to make it smooth and straight. Someday . . . ."
I sat and watched and waited for the day I was grown enough to dip candles. To be able to dip a candle was the mark of a woman to me. It wrapped up in one skill all the things that a woman did, and I dreamt of the day I had a husband and children of my own to care for. When I was grown, I would dip candles.

Ma was dipping candles that December day when Pa had gone for supplies and Jeb came screaming across the prairie.
"Ma! Ma! Indians! Indians!" he shouted, running so hard and desperate that I thought sure his lungs would burst. His eyes seemed near bugged out of their sockets, and his voice, just beginning to deepen, was now higher than mine. Any other time, I might have laughed at him for squeaking. "Mr. Belton says they struck the Simpsons and they're headed this way." He collapsed on the ground, his breath having completely left him.

You can get the whole story for 99 cents at Amazon and Smashwords .