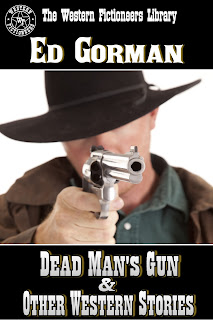 Though he’s better known for his crime, mystery, and horror fiction, Ed Gorman is no slouch at writing westerns, either. Gorman’s spare style and uncomplicated prose make it easy to imagine the author as a storyteller in the oral tradition, forced to put pen to paper during an attack of laryngitis.

Perhaps nowhere is that better expressed than in the new anthology Dead Man’s Gun and Other Western Stories. The collection of nine short tales and one brief treatise entitled “Writing the Modern Western” provides eloquent evidence of the author’s exceptional range in storytelling. More than range, though, Gorman’s short stories display the author’s uncommon ability to dig into the darkest recesses of the human psyche and expose the thin lines separating good and evil, bravery and cowardice, love and hate, pride and shame. The way Gorman’s characters balance on those lines — always in danger of falling to one side or the other — will make readers alternately shudder and rejoice.

No matter how uncomfortable the thought may be, Ed Gorman knows us all. Gazing into his mirror is undeniably uncomfortable, yet oddly liberating. “Dead Man’s Gun” will resonate with anyone who’s ever wanted revenge. Writers and movie buffs will relate to “Pards,” a bittersweet tale about a middle-aged, unsuccessful writer who finds a spiritual twin in an aging matinee icon. “The Face,” a Civil War story, is an atmospheric, psychological study of men under pressure, inexorably sliding into madness. “Mainwaring’s Gift” is at once sad and romantic and hopeful. “Gunslinger,” “Blood Truth,” and “Dance Girl” are equally compelling, each in its own way.

Though all the stories take place in the 19th century American west, it’s difficult to define Dead Man’s Gun and Other Western Tales as simply “western.” Fans of psychological horror, crime, and mystery will find much to enjoy in this volume, as well.


Kathleen Rice Adams is a Texan, a voracious reader, a professional journalist, and a novelist in training. Her opinions are her own and are neither endorsed nor necessarily supported by Western Fictioneers or individual members of the organization. The publisher provided a review copy of Dead Man's Gun and Other Western Tales.