August in the Old West
by Jacquie Rogers


Confession: I didn't have time to scour the news-papers for juicy tidbits this month because of deadlines because ...  tada!  I was there!  Yep, headed out to Owyhee County to get my country fix. There is one Old West article -- which is at the end of all my self-indulgence, er, blog post. 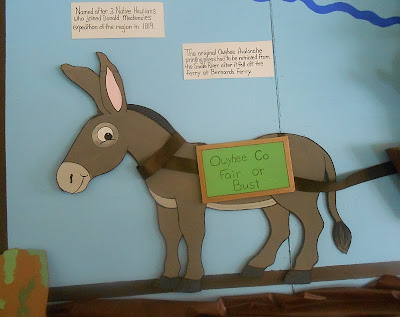 What a fun week!  (All except for the three days I spent head-down finishing my deadline book.)  One of the aspects of rural life that I really miss is the connection with community and the generations.  The Owyhee County Fair is all about those two things.  Here's Daria Paxton with her art entry: 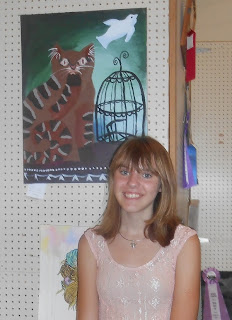 This is Daria and her proud papa, Matt Paxton, with their cattail arrangement: 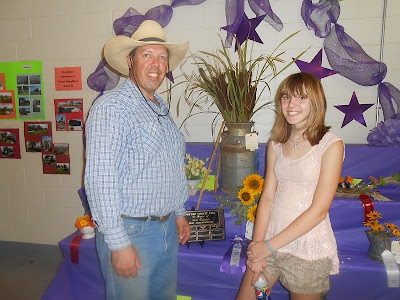 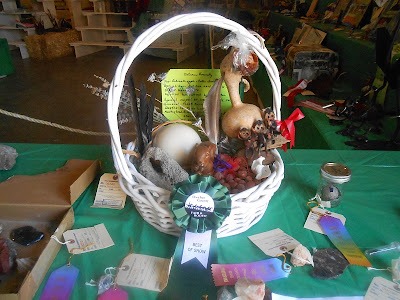 To me, this is the spirit of the Old West--creativity; making a full and rich family life out of desert; taking pride in your family and your accomplishments.

And who knew the British Invasion even came to Owyhee County?  I have pictures!  Take a good look at Matt in the middle picture.  Well, he has an alter-ego. :) 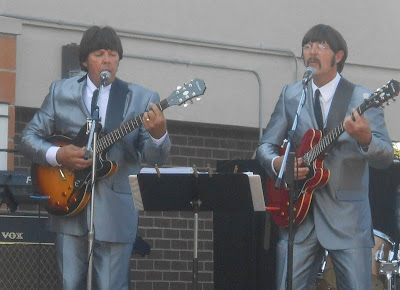 That's Matt on the left and his brother, Jim, on the right.  They're in a very accomplished retro-Beatles band called Get Back, and played a three-hour concert in 100-degree heat--yep, full costume and wigs.  These guys are terrific, too, although they could use some work with their between song patter.  Their British accent has a decided Owyhee County twang. 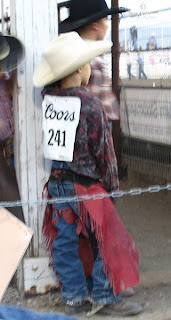 Let's Rodeo!
Then there's the Owyhee County Rodeo, where you'll find some rugged fellows and not a whole lot of polish.  A lot of the local men compete, and do pretty well, too.

They start 'em young there, as is the case in many rural areas.  To the left are some mutton busters.  This boy is probably about six years old.  The winner of the event was a little girl in pink chaps who showed them all how it's done.  She even had the strut back to the chutes down pat.

The rodeo has all the usual events, plus Wild Cow Milking.  I'm posting a picture but you won't see much.  Actually, we didn't see much, either, because this is a fast and furious event. 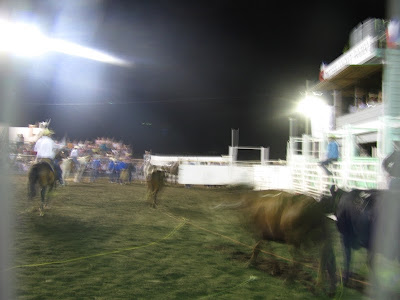 These cows have never seen a human before and aren't all that willing to share their milk.  Final score: Cows, 5; Cowboys, 1.  The good news was that the EMTs got to watch the whole show this year, and that doesn't happen very often.

As promised, here's an article from the August 9, 1873, issue of The Owyhee Avalanche:

SHARP PRACTICE. Deputy Sheriff S. H. Small, of Baker County, Oregon, arrived in town last Monday night with warrants of arrest for two men who had deserted from the U. S. Army, and subsequently robbed a store on Powder River, near Backer City.  He tracked them to the vicinity of Silver City, and naturally came to the conclusion that he would find them here.  While taking a tramp round town the next morning, Small espied the two fugitives sitting in front of Sommercamp's saloon.  They had just arrived on foot and were resting themselves.  A dilemma now presented itself to the Oregon official.  He could have his men arrested and put in charge of the Sheriff of Owyhee till such time as a requisition from the Governor of Oregon would demand them, but he wanted to keep the matter quiet, and if possible take the fellows back with him.  A plan was finally hit upon, and worked admirably.  Small got an acquaintance to hire the two chaps ostensibly to work on a ranch at Camp Lyon, which is about 20 miles from here, and just across the boundary line between Idaho and Oregon.  Totally unsuspecting the trap that had been prepared for them the two culprits left town in a wagon, followed by Small and assistant on horseback.  As soon as they put foot on Oregon soil, the two ranch-hands were, of course, arrested and are now most likely bewailing their fate in the Baker County Jail.  It was decidedly a case of sharp practice, and Mr. Small deserves credit for the successful manner in which he carried it out.