I WAS A TEENAGE BUSHWHACKER: PRODUCER HERMAN COHEN'S RECOLLECTIONS OF LON CHANEY by C. Courtney Joyner 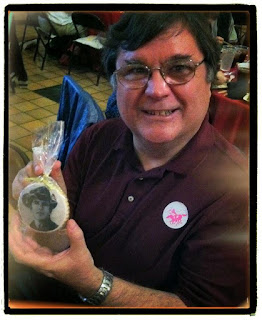 My first meeting with producer Herman Cohen happened almost by accident. Attending college in Los Angeles, time better spent studying was usually taken up with going to old movies, or better, meeting the people who made them.

One afternoon, I’d made my way to Raleigh Studios, the small lot opposite Paramount, to talk to Terry O. Morse about his directing GODZILLA with Raymond Burr. Walking to Terry’s office was when I saw a sign that read: COBRA MEDIA – HERMAN COHEN.

I had to knock on the door of the little bungalow, and at least try to shake hands with the man who produced I WAS A TEENAGE FRANKENSTEIN. Herman was there, let me stammer my fan worship, and then we arranged for a lunch. Quite a few lunches occurred over the years following, always filled with tales of his work as a producer of legendary “B” flicks.

Herman Cohen produced the very first horror movie I ever saw in the theater (BERSERK! starring Joan Crawford), and even more movies I stayed up late to watch on Saturday nights: I WAS A TEENAGE WEREWOLF, HORRORS OF THE BLACK MUSEUM, KONGA, BLOOD OF DRACULA, and TROG. In the 80’s, he was distributing horror films (WATCH ME WHEN I KILL) through Cobra Media, rather than making them, but kept talking about getting back into production. 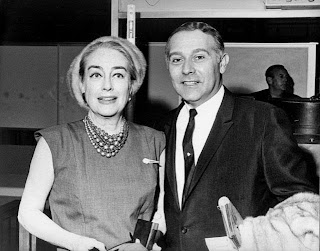 (PRODUCER HERMAN COHEN, WITH HIS STAR JOAN CRAWFORD,DURING THE SHOOTING OF ‘BERSERK!’)


Herman never made another movie, and died of throat cancer in 2002.

The following interview was done informally, as I was writing about Lon Chaney’s westerns for Gary and Sue Svehla’s MIDNIGHT MARQUEE ACTOR’S SERIES, and wanted Herman’s input. He’d told me these stories several times, but I needed them for the “official account.” He was always happy to oblige with a trip down memory lane.

The first, 1951’s BRIDE OF THE GORILLA, with Chaney and Raymond Burr, remains an odd, interesting movie, despite its insane title. But the title is what sold it, and it became a moneymaker for the young producer, who was just getting his feet wet, and ready to move on to two westerns:

(POSTER FOR BRIDE OF THE GORILLA, HERMAN COHEN’S FIRST FILM WITH LON CHANEY)

COURTNEY JOYNER: Your first work with Lon was on BRIDE OF THE GORILLA, when you were at RealArt with Jack Broder?

HC: When I worked for Jack Broder I did BRIDE OF THE GORILLA, that is correct. I did three pictures with Lon. That one also had Raymond Burr and Barbara Payton.

CJ: Even though he was working with his old pal Curt Siodmak, (writer of THE WOLFMAN), Lon was cast as the police inspector, rather than the guy who turns into the gorilla.

HC: Well, because we had Raymond Burr for that part.

CJ: Broder was putting so many of Lon’s Universal horror pictures back into theaters in the 50’s -

HC: RealArt was putting the old Universals into the theaters again (in the 1950’s) and doing well with them. Abbott and Costello, Maria Montez and the horror films…

CJ: It seems only natural that Broder would want to star Lon Chaney in his company’s first original horror film.

HC: Well, first thing, let me tell you something about Lon, like I said, I worked with him on BRIDE OF THE GORILLA, I was the Associate Producer on that because I was Jack Roeder’s executive assistant at that time. In fact, I wanted Lon Chaney to play Chief Pontiac when Jack wanted to do BATTLES OF CHIEF PONTIAC, and then of course THE BUSHWHACKERS was, I think, came first, and then The BATTLES OF CHIEF PONTIAC - but Lon was always professional, I mean whatever he had to do, he did. He had a reputation for the boozing, but I never saw it affect his work in any way, and I’ve worked with a lot of drinkers.

CJ: THE BUSHWHACKERS was Rod Amateau’s first film as a director, and Tom Gries (WILL PENNY, BREAKHEART PASS) co-wrote the screenplay?

(THE BUSHWHACKERS POSTER SHOWS CHANEY IN OLD AGE MAKE-UP THAT LED TO CASTING IN HIGH NOON.)

HC: With Rod, right. A terrific guy, and we gave him a break to direct the picture. It has a very good cast. Rod Amateau got along great with Lon Chaney, and John Ireland, Dorothy Malone. Those were great people for a cheap budget picture, believe me. We did THE BUSHWHACKERS out in the valley, at Corriganville, or one of the western towns. So we didn’t really get to know Lon on that, it was a fast shooting schedule, and you’re in and out, you know. We did THE BUSHWHACKERS in twelve days I believe, the entire picture.

CJ: Apparently it was THE BUSHWHACKERS that Stanley Kramer saw that made him want to bring Lon into HIGH NOON.

HC: Now that I never knew. Stanley is an old friend of mine. I met him because we had offices at the old Charlie Chaplin Studios. That’s where I did TARGET - EARTH, and THE MAGNIFFICENT ROUGHNECKS with Mickey Rooney and Jack Carson. And Stanley did NOT AS A STRANGER with Robert Mitchum, and Frank Sinatra - 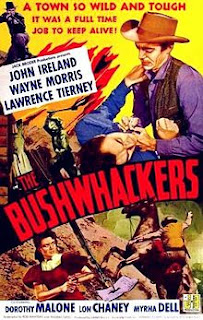 CJ: Lon was in that, playing Mitchum’s father!

HC: Really? Everything brings us back to Lon Chaney! (laughs)

CJ: I always thought he was underrated.

HC: He was. He was underrated because he was Junior, because of his dad. He was so good in OF MICE AND MEN, I mean he was brilliant in that. It’s because of OF MICE AND MEN that I wanted to use Lon in the three pictures that I cast him for. Of course, we never mentioned his dad, because he had that all his life with people. But these were low budget pictures, and they were made fast. And when you have a picture like that, you don’t have time to know people, except for BATTLES OF CHIEF PONTIAC, I got to know Lon quite well because we went on location to Rapid City, South Dakota.

CJ: An old publicity release states that Lon was camping out, and staying with the Indians during shooting.

HC: It was the Sioux tribe that we worked with in Rapid City, and the fact that Lon was playing Chief Pontiac, they got a kick out of that, and he thought he was Chief Pontiac! (laughs) Lon wanted to get to know the Indians well, and the Indians, we had an encampment for them, and they were staying in tents, you see. And Lon had a room at the Hotel Alex Johnson, and many a night he would spend - we had a tent for him - and he wanted to sit and listen to the various stories from the old timers, in the Sioux tribe. He wanted to get to know the Indians better. And he really lived and loved that part. He loved that part.

CJ: Even in the press releases, he spoke very fondly of the part, and the fact that he appreciated finally being able to play an Indian, which he had always wanted to do.
HC: He loved the part. As far as he was concerned, he was Chief Pontiac. He had a great feeling for the Indians. 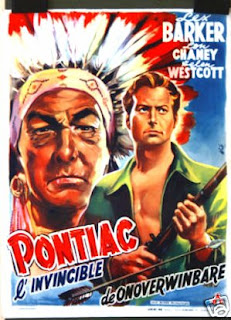 (BELGIAN POSTER FOR CHIEF PONTIAC, FEATURES A GREAT PORTRAIT OF LON CHANEY IN ONE OF HIS FAVORITE ROLES.)

Lon was no trouble. Let me tell you something about Lon - he was a very private person. Lon did not associate, and did not want to associate, with the director, the producer, members of the crew. I think he thought it would throw off his performance somehow. Like Chief Pontiac in Rapid City South Dakota, he wanted to be with the Indians. 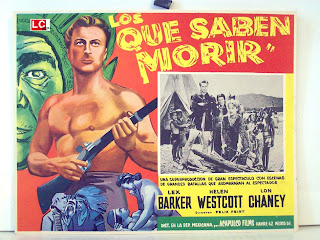 Where I got to know Lon is when we went out to Rapid City, South Dakota and he was there for about three weeks. He would come into the hotel to take a bath, or this or that once in a while. Lon had that thick, type of voice that was very commanding, but he was very funny! The Indians used to laugh with him all the time.

But being with the Sioux is how Lon wanted it, but boy, when we started shooting? He was always there, right on time, knew his lines, always had something to add to his part. I was still basically a kid when we made these movies, but Lon was a real pro, was great with me, and a hell of an actor.