Geography as an antagonist--selections from Battle of Fortune Wells 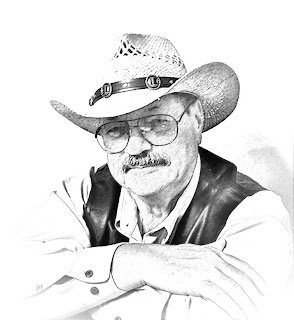 Time to get wicked again. Time to think of things dark and bad. Time to realize that a good antagonist is every bit as important as a good protagonist.

I just finished a good novel by faraway friend Dan Chamberlain. His “Long Shooters” hit the Amazon bestseller list of Westerns for some time. And the one I read, Battle of Fortune Wells, pits men against the country as much as it pits men against other men. Have a read. Situation, an army patrol in the desert:

Mehan now led fifteen dusty soldiers who rode tired and thirsty. There was water in their oversized cavalry canteens, but it was little enough just to serve their horses. At times like this, the horses came first. The heat on the ground approached one hundred and twenty degrees and a man on foot would last but a few hours without water. Even with plentiful water, he’d need a gallon a day to stay alive. Their scout had found water at Dutch Tanks and reported back yesterday. That was now their destination.
The formation of rocks known as Dutch Tanks was little more than a jumble of boulders that formed a series of eroded basins that caught, and held rain. The basins were deep and narrow and in the shade afforded by the rocks, they often held water throughout the long months without rain.
This had been an unusually long stretch of drought and everyone fighting for survival in the territory was feeling the strain. Many streams and rivers were nothing more than dry bottoms. One might dig down and make a sump in some places, but only as a last resort. Because this land had once been a sea, water that came from such a sump was often salty. Lieutenant Mehan had helped dig such holes in his life when survival required it, but he did relish the thought, thirsty or not.

Our hero is Tomas Killain. He’s a hard man, a skilled man, and a good man. He knows the desert, but sometimes it can play tricks even on someone as skillful as Killain.

Tomas Killain was in trouble. For over an hour, he’d been laying in a dry, sandy wash, covering his horse’s eyes and holding the animal’s head down by lying across its neck. Up till now the horse had kept quiet, but the heat was becoming unbearable and they both desperately needed a drink. They couldn’t drink. In fact, they couldn’t make the slightest move.

Okay, so it’s Comanches who make Killain hide. But it’s the desert that makes the hiding so unbearable. Yes, the Indians are the enemy, but the desert works with them and for them, and against anyone who cannot use its disadvantages to gain the advantage.

Everything Killain does requires consideration of the terrain, the desert, the huge distances without water. The land, although beautiful, is deadly.

Killain rode north and west, into the badlands of New Mexico. He pondered his surroundings. The country he traveled was harsh and dry. Most of the terrain was rocky, with scrub brush and sage providing cover for a few barren, but what few plants grew here were stunted and mostly covered with thorns. He knew it wasn’t a friendly land to be traveling in, even in the best of times. Throw in marauding renegade Comanche and the country became downright forbidding.

All along Killain’s way, we are constantly reminded of how difficult and potentially deadly the terrain is. Not just by inference but by direct indication. The desert is, in a way, an enemy, and in another way, a friend upon which a man can depend to act as it always acts.

Nearly Jack’s Peak, Killain dismounted and wiped his horse’s nostrils with a wet rag. He filled his hat with water and let each horse drink it dry. Taking a long pull from one of his large canteens, he felt the beginning rumblings of hunger. He wished he could pot one of the large jackrabbits he knew would be hiding in the sage, but he dared not fire a gun. That meant he must be content with jerky and water for supper. There was no place this side of Galena Peak he could safely build a fire.
Loosening the girth around his horse’s middle, he let both animals graze among the sparse grasses. Pulling on a stick of jerky, he watched the horizon for dust, occasionally checking his back-trail. He would ride a couple more hours and find a place to lie up. He had a long ride to make and the day was growing shorter. One more stick of jerky and he would be on his way.

None of the pieces I’ve pulled from Dan’s novel fit together. Yet they all fit together. Yes, Comanche’s have jumped the reservation. Yes, they are plundering and killing. Yes, the army must go after them. And all this must be done on one of the most forbidding geographical areas on earth.

Few novelists I know do better at describing setting and helping the reader get a good feeling of what the protagonist must face in the way of forbidding geography. Battle of Fortune Wells is a good book. And throughout, the geography is a major antagonist that the protagonist must deal with in addition to the human antagonists he faces. If you’d like to see how setting can be made a good antagonist, I suggest you read Dan Chamberlain’s novel.

Posted by ChuckTyrell at 9:44 AM